Robin Soderling and Andy Murray served up reminders that there are more than two contenders for the men's title at the Australian Open with dominant third-round victories on Saturday.

Kim Clijsters also continued to glide through the women's draw even if the Belgian admitted she was not at her best in her 7-6, 6-3 victory over Alize Cornet, which spoiled the Frenchwoman's birthday. 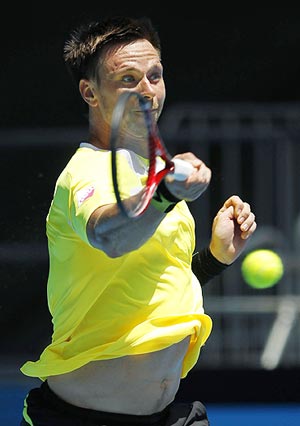 "You never play a whole tournament playing your best tennis and you have to also work for it," said the three-times US Open champion. "I think that's what I had to do today."

Sam Stosur was later unable to raise her game to keep alive her dreams of ending Australia's three decades without a local champion, the fifth seed crumpling to a 7-6, 6-3 defeat to Czech Petra Kvitova on Rod Laver Arena.

Murray, who knows a thing or two about the weight of home expectation from his Wimbledon experiences, was clinical in his 6-1, 6-1, 6-2 dismantling of Spain's Guillermo Garcia-Lopez.

"It was good," the Briton, who lost to Federer in the final here last year, said after the 82-minute contest.

"Obviously, it was a quick match. Served well. Hit the ball clean from the back. That was it."

Soderling's 6-3, 6-1, 6-4 trouncing of Czech qualifier Jan Hernych took longer but was equally comprehensive. Both he and Murray have yet to drop a set this week and the Swede thought Nadal and Federer were not necessarily shoe-ins for the final.

"I think there's many guys who can actually compete against them and have a chance to win the tournaments like this when they're playing well," he said.

Like Soderling and Murray, Vera Zvonareva is still seeking her first Grand Slam title and she was delighted with her form after a 6-3, 7-6 win over Lucie Safarova.

"If you would compare today's match to my first match, I think I was playing a different level already," said the second seeded Russian.

Big-serving Raonic played with a confidence that belied his ranking of 152nd and his victory over Russian Youzhny surprised everybody but himself.

Ukrainian Dolgopolov rated his victory over Tsonga as the best of his career but admitted Tsonga, who slipped out of the top 10 after missing three months of last year with a knee injury, had not been at the top of his game.

The French 13th seed was blunt in his own assessment of why he had lost.

"Because maybe he was better than me," said the 25-year-old, who lost to Novak Djokovic in the 2008 final and Federer in the semi-finals here last year.

There were fireworks on the Margaret Court Arena where last year's semi-finalist Marin Cilic beat marathon man John Isner 4-6, 6-2 ,6-7, 7-6 ,9-7 in a slug-fest that featured 58 aces to set up a meeting with Nadal or Tomic in the next round.

The Croatian mercifully sealed the victory after four hours, 33 minutes -- some seven hours short of Isner's record match against Nicolas Mahut last year at Wimbledon -- and the players embraced at the net.

Such respect was notably absent from a fiery doubles encounter that pitched Indians Mahesh Bhupathi and Leander Paes against Spaniards Feliciano Lopez and Juan Monaco.

The match ended with the players having to be separated by officials as a testy encounter boiled over, the Spaniard's unhappy at the Indians' use of the word "vamos" (Spanish for "let's go").

© Copyright 2022 Reuters Limited. All rights reserved. Republication or redistribution of Reuters content, including by framing or similar means, is expressly prohibited without the prior written consent of Reuters. Reuters shall not be liable for any errors or delays in the content, or for any actions taken in reliance thereon.
Related News: Andy Murray, Jo-Wilfried Tsonga, Alexandr Dolgopolov, Milos Raonic, Leander Paes
COMMENT
Print this article 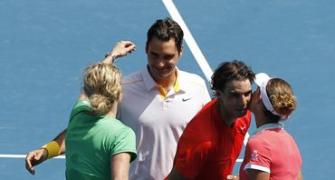 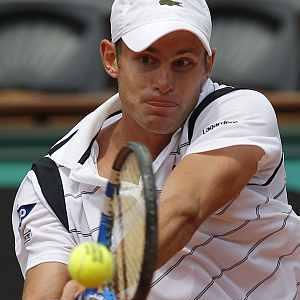