Images from Day 6 of the Australian Open played at Melbourne Park on Saturday.

Nadal sails into fourth round

Spain's Rafael Nadal was at his dominant best against Pablo Carreno Busta on Saturday, brushing aside his compatriot 6-1, 6-2, 6-4 to move into the fourth round at the Australian Open.

Top seed Nadal has not been beaten by a fellow countryman since losing to Fernando Verdasco at Melbourne Park in 2016, and extended his winning streak against Spanish players to 18 matches with his win over 30th-ranked Carreno Busta.

Nadal, bidding for a record-equalling 20th Grand Slam title, faced no break points and struck 42 winners to just seven unforced errors in the one hour and 38 minute contest on Rod Laver Arena.

Nadal sealed the victory after Carreno Busta sent a backhand return into the net, setting up a meeting with either Australian Nick Kyrgios or Russian 16th seed Karen Khachanov.

Nadal will remain at the pinnacle of the rankings if he reaches the semi-finals of the tournament.

Medvedev sets up Wawrinka clash in fourth round 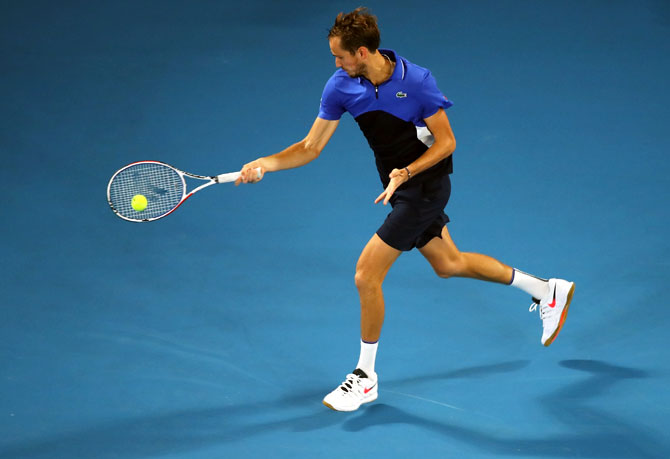 Fourth seed Daniil Medvedev of Russia put on a clinical performance to beat a suffering Alexei Popyrin 6-4, 6-3, 6-2 on Saturday and ease into the fourth round of the Australian Open.

Medvedev, a US Open finalist last year, was up by a set and a break when local hope Popyrin took a medical timeout for a problem with his left hip.

Popyrin, ranked 96 in the world, was unable to put up much of a challenge as Medvedev converted five of his eight breakpoints while facing just one on his own serve.

"(It) was a good match. I didn't lose my serve... That's the most important in matches in Grand Slams, to try to hold your serve easy, to make your job easier," said Medvedev, who reached the fourth round for a second consecutive year at Melbourne Park.

"I have some things I maybe could have done better in my mind. At the same time, won quite easy today. Really happy about it. Can save some energy for next round."

Coming off a season featuring four titles and a Tour-leading 59 match wins, Medvedev has continued his good work at the year's first Grand Slam and had 19 unforced errors on Saturday compared with the 44 committed by Popyrin.

The 23-year-old Russian also won 15 of his 16 net approaches, including the one he volleyed to finish the match.

Next up for him will be a clash with three-times Grand Slam winner Stan Wawrinka, who advanced after American John Isner retired with an injury while trailing 6-4, 4-1.

"Stan is a big hitter, great serves," Medvedev said of the Swiss 15th seed, the title winner at Melbourne Park in 2014.

"I'm going to work a little bit on return, maybe will work just to be aggressive myself, to not let him have all the time he wants because that's when he's the most dangerous." Angelique Kerber moved into the fourth round of the Australian Open on Saturday with a 6-2, 6-7(4), 6-3 win over Camila Giorgi, extending her unbeaten record against the Italian to 5-0.

The German 17th seed, who won the title in 2016, was barely troubled in the first set as the erratic Giorgi served up eight double faults and 20 unforced errors.

However, Giorgi cut out the misfires and dialled in her groundstrokes in the second set, striking a forehand winner in the tie-break to level the match.

Kerber upped her game in the third set against her 102nd-ranked opponent, breaking the Italian to go up 5-3 before serving out the victory in two hours and eight minutes. 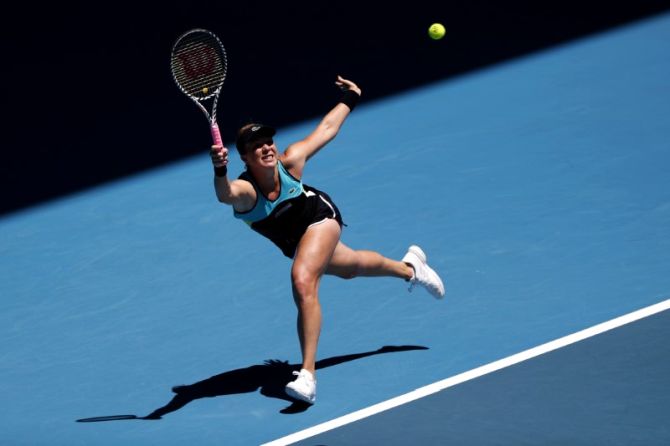 IMAGE: Russia’s Anastasia Pavlyuchenkova in action during her victory against World No 2 Czech Republic’s Karolina Pliskova in their 3rd round match. Photograph: Issei Kato/Reuters

Anastasia Pavlyuchenkova secured her first career victory in seven attempts over world number two Karolina Pliskova on Saturday as the Australian Open lost another high seed in the third round.

Pavlyuchenkova had a 4-1 lead in the first set and a 2-0 lead in the second before being taken to tiebreaks but won the key points to clinch victory in two hours, 25 minutes.

"It hasn't sunk in yet. I'm still in the match and focusing on the next point," Pavlyuchenkova said.

"I was thinking that if I take one or two games on her serve that would be amazing because she is the ace queen on the tour so that was my goal, so I was focusing on returning well.

"I also managed to hold on my serve too, so that helped."

She will next meet three-times Grand Slam champion Angelique Kerber in the fourth round.

Halep cruises into fourth round Romanian tennis player Simona Halep advanced to the fourth round of the Australian Open with a comprehensive win over Yulia Putintseva of Kazakhstan at the Rod Laver Arena on Saturday.

The second set saw Halep and Putintseva break one another before the former took control, sealing the match as a dropshot from the Kazakh fell into the net.

Halep will either face Elise Mertens or CiCi Bellis in the fourth round.

Zverev cruises past Verdasco into fourth round 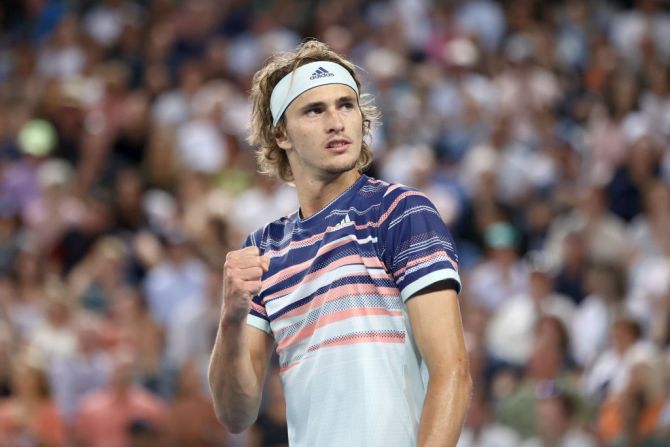 Seventh seed Alexander Zverev produced another power-packed performance in a 6-2, 6-2, 6-4 win over Spanish veteran Fernando Verdasco to march into the fourth round of the Australian Open on Saturday.

The German broke the 36-year-old Verdasco, who is ranked 51, twice in each of the first two sets at the Margaret Court Arena.

Verdasco, a former top-10 player, broke the 22-year-old in the third to go up 4-2 but Zverev got the set back on serve in the next game and then served out to complete his victory. Russian Andrey Rublev extended his winning streak to 11-0 for the season after coming back from a set and a break down to defeat 11th seed David Goffin of Belgium 2-6, 7-6(3), 6-4, 7-6(5) in the third round of the Australian Open on Saturday.

The lanky 22-year-old arrived in Melbourne having won titles in Doha and Adelaide at the start of the season while he also won all four singles matches he contested at the season-ending Davis Cup Finals in November.

Rublev, currently at his career-high ranking of 16, had not lost a Tour-level match since Frenchman Jo-Wilfried Tsonga beat him in the first round at the Paris Masters in October.

But that 14-match winning streak appeared set to meet its end with Goffin serving for the second set at 5-4.

Rublev, however, got the set back on serve and did not look back from there on to reach the fourth round of the Australian Open for the first time.

With compatriots Karen Khachanov and Daniil Medvedev also bidding to reach the fourth round in Melbourne, Rublev hoped they could revive tennis to the glorious days the sport enjoyed in Russia during Marat Safin and Yevgeny Kafelnikov.

Next up for Rublev will be a fourth-round clash against the winner of the match between German seventh seed Alexander Zverev and Fernando Verdasco of Spain.

"Now only focus is to recover as fast as I can for the next matches. Now it's more physical than mental," he said. "These kind of events like Grand Slams, you know how tough it is to play best-of-five sets."

Bencic bandwagon shudders to a halt in Kontaveit rout 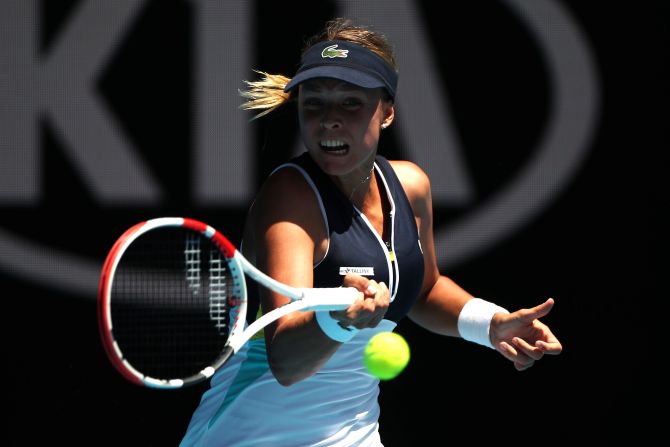 Sixth seed Belinda Bencic's hopes of exploiting a string of upsets at the Australian Open lasted exactly 49 minutes on Saturday, just long enough for a ruthless Anett Kontaveit to administer a 6-0, 6-1 third-round thrashing at Melbourne Park.

Bencic had been on a good run of form after years of battling injury, toppling defending champion Naomi Osaka to reach the semi-finals of the US Open last year and earning her highest seeding at a Grand Slam for Melbourne Park.

Kontaveit was supposed to play the Swiss in the third round at Flushing Meadows only to withdraw with a viral illness that cut short her 2019 season and sent the Estonian hurtling down the rankings to number 31 in the world.

On Saturday's evidence, Bencic would never have made it to the encounter with Osaka that revitalised her career as the powerful Estonian simply blew her off the court at the Margaret Court Arena.

"She played a great match. Really solid. I think I was a little bit overwhelmed," said Bencic, 22.

"There is not much you can do. You can just try and fight. Obviously it didn't work out for me today. I didn't feel my best on the court but she was playing really well.

"I was trying to hang in there, trying to fight." 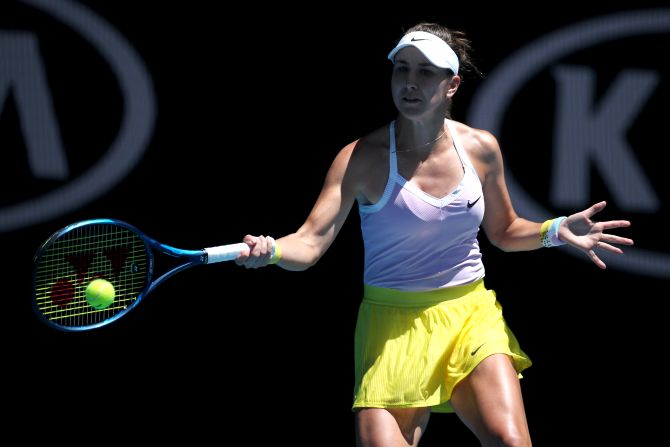 Kontaveit hit 21 winners in the short contest and Bencic made 18 unforced errors, including the wild swipe of a forehand return that sent her opponent into a fourth round meeting with Polish teenager Iga Swiatek.

"Didn't work out well for me today," Bencic added.

"But I'm really happy for her because last time we were supposed to play, something bad happened to her."

With the last three champions -- Osaka, Caroline Wosniaki and Serena Williams -- knocked out on Friday and second seed Karolina Pliskova upset on Saturday, the women's draw at Melbourne Park is wide open.

"It's the same at every Grand Slam. There are upsets and I think it's normal because it's tennis, and tennis is very unpredictable," said Bencic.

"I don't really care so much now who is going to win." 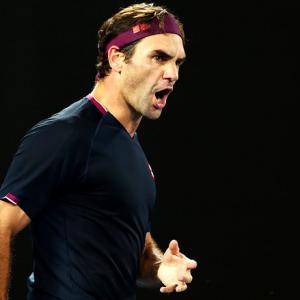