Divij Sharan and Purav Raja staged a spectacular comeback to shock third seeds Rajeev Ram and Benjamin Becker and storm into the semi-finals of the ATP Challenger in Guadalajara, Mexico, on Friday.

Divij-Purav were broken in the first game of the match and were down 0-3 but went on to win six of the next seven games to pocket the first set.

In the second set they were broken at 3-4 as the match was forced into the tie-breaker, which the Indians won.

Becker had got the better of Andre Agassi in his last match of his career at the US Open. His current ranking is 95 in singles, with a career best of 38.

Rajeev, who formed a team with India's Rohan Bopanna early this year before switching partners, is ranked 44 in doubles with a career-high ranking of 33 in 2010.

Divij and Purav next play Croats Marin Draganja and Mate Pavic, who knocked out the top seeded Thai pair of Sonchai Ratiwatana and Sonchat Ratiwatana in the 1st round. 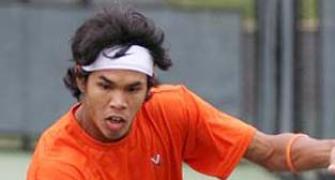