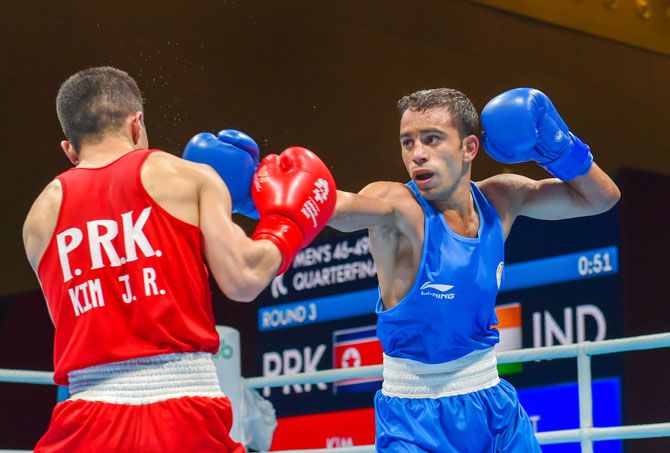 Vikas Krishan (75kg) overcame a bleeding left eye to assure himself of a third successive medal at the Asian Games, while Amit Panghal (49kg) produced a power-packed performance in his quarter-final bout to guarantee a maiden podium finish in Jakarta on Wednesday.

However, it was curtains for world silver-medallist Sarjubala Devi (51kg) after she lost her quarter-final bout 0-5 to up and coming Chinese Chang Yuan, a Youth Olympics gold-medallist and also a former youth worth champion.

Her loss means that Indian women boxers would be returning without a medal from the Asiad for the first time since the event was added to the Games in 2010. The celebrated M C Mary Kom had claimed a gold and L Sarita Devi and Pooja Rani fetched a bronze each in the 2014 edition.

Vikas, a gold medallist in 2010 and bronze winner in 2014, prevailed on a split 3-2 verdict against China's Tuoheta Erbieke Tanglatihan in the quarter-finals.

It was a tough bout for the seasoned boxer, who had to go on the defensive in the first round. He will square off against Kazakhstan's Abilkhan Amankul in the semi-finals.

"My performance was affected by the cut I suffered in the first round. I was a bit disturbed and that I was not able to block him that much. If it wasn't for the cut, I would have beaten him 5-0, like I did in the past. Having said that, he is a good boxer," said Vikas.

The Haryana-boxer, one of only four Indians with a world championships medal to his credit, launched very few attacks but managed to connect just enough straights to get the judges' nod.

He spent most of the bout fighting from a distance and closed in only when Tanglatihan tried to target his body.

Earlier, Amit advanced to the 49kg semifinals to assure himself of a maiden medal at the Games.

The Armyman, who is a Commonwealth Games silver-medallist, defeated South Korea's Kim Jang Ryong 5-0 with a thoroughly dominating performance to enter the last-four stage where he will take on  Filipino Carlo Paalam.

In the boxing competition, semifinalists are entitled to bronze medals.

The 22-year-old from Haryana, making his debut at the Games, intimidated his 20-year-old opponent, using his right straights to good effect.

On the other hand, the Korean, despite being a southpaw and the taller of the two, simply withdrew after a decent show in the opening three minutes.

Amit was brilliant with his footwork, moving around craftily to exhaust his rival, who looked unsure for most of the bout.

"He was good boxer so it was not easy at all. I always rely on counter-punches and against him it paid off. In third round, he got tired and I also played a bit safe. It was all about keeping the lead after winning the first two rounds," Amit said.

It has been a brilliant year for the Indian, who won back-to-back gold medals at the inaugural India Open and the prestigious Strandja Memorial Tournament in Bulgaria.

This was followed by a silver at the Gold Coast CWG in April.

India's assistant coach C A Kuttappa said he is a definite prospect for the gold medal.

"He is one of the best boxers we have," said Kuttappa.

In the evening session, national champion Dheeraj Rangi (64kg) fought his heart out against Mongolia's Baatarsukh Chinzorig but could not find favour with judges. The Indian came up with impressive right hooks but was done in by a weak defence.

With this, India equalled its 2014 performance in men's boxing in terms of number of medals assured. 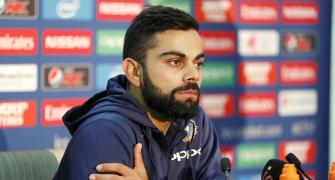 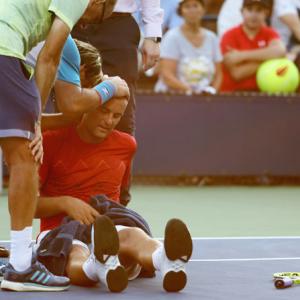 US OpeN: Players retire, fans collapse while heat rule in play at NYC 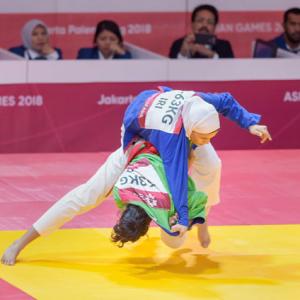 India@Asiad: Gritty Vikas makes as he is assured of another \medal