Argentina will return to Olympic football next year after sealing victory in the South American under-20 qualifying tournament in Uruguay on Saturday. 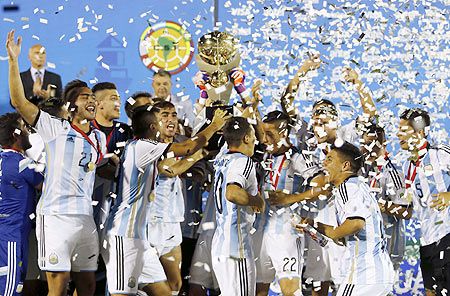 The Argentines, winners of the Olympic gold in 2004 and 2008, missed out on London but will be in Rio de Janeiro in 2016 after beating hosts Uruguay 2-1 in Montevideo.

Uruguay took the lead in the seventh minute with a goal from Gaston Pereiro, but Argentina levelled before half-time through Sebastian Driussi. Angel Correa got the winner for the visitors nine minutes from time.

The result means that Argentina are under-20 South American champions and grab the one guaranteed qualification spot for next year's Olympics.

Second-placed side Colombia will play off against a team from the Concacaf region for a place in the Games. The Colombians beat Brazil 3-0 on Saturday to secure second place in the competition.

Brazil, who finished fourth in the 10-team tournament behind Uruguay, qualify automatically as hosts.

The top four sides all qualified for the under-20 World Cup, which takes place in New Zealand in May.

The tournament threw up a number of noteworthy performances, especially from Argentina, the top-scoring team with 24 goals in 10 games.

Simeone was ably assisted by Correa, who plays for Simeone's father in Spain.

Correa's trickery in midfield was vital for Argentina and all the more satisfying given he recently returned to the game after undergoing surgery on a heart condition.

The team was managed by Humberto Grondona, the son of late Argentine FA and FIFA supremo, Julio Grondona.

Image: Argentina's players celebrate after winning the South American Under-20 Championship against Uruguay in Montevideo on Saturday

© Copyright 2021 Reuters Limited. All rights reserved. Republication or redistribution of Reuters content, including by framing or similar means, is expressly prohibited without the prior written consent of Reuters. Reuters shall not be liable for any errors or delays in the content, or for any actions taken in reliance thereon.
Related News: Correa, Argentina, Giovanni Simeone, FIFA, Uruguay
COMMENT
Print this article