No other football club -- big or small -- has an association with a global brand like Adidas in Indian football. IMAGE: Real Kashmir FC are the first football club from Jammu and Kashmir to qualify for the country's top tier I-League. Photograph: PTI

I-League debutants Real Kashmir Football Club on Monday pulled off a major sponsorship coup by signing up with sportswear giant Adidas for the upcoming national season.

For the two-year-old Srinagar-based side, which won the second division league to become the first club from Jammu and Kashmir to qualify for the top-tier I-League, the association with Adidas is significant.

No other football club -- big or small -- has an association with a global brand like Adidas in Indian football. 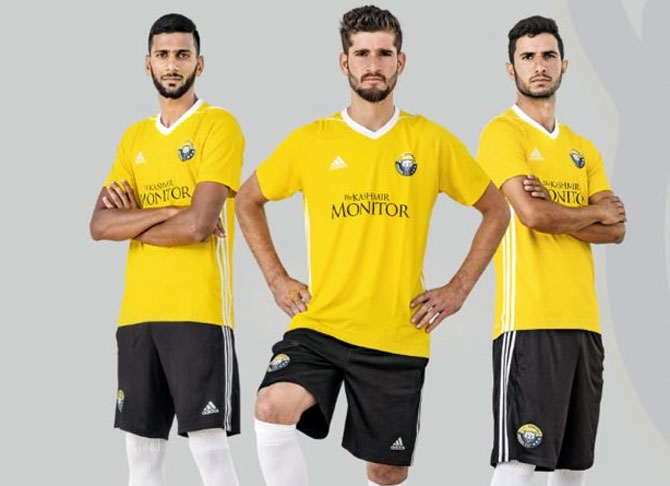 Though the financial nitty-gritty of the deal is not known, Adidas will be the official kit partners of Real Kashmir in the I-League which begins on October 26.

"It is a momentous day for Real Kashmir. Such a big brand coming to support us as official partner is an achievement in itself. No other club has Adidas as sponsor but we have got it," club co-owner Shamim Meraj said.

Asked how this association came through, he replied, "We wanted a big sponsor and they (Adidas) must have their reasons to be with us. It is not a case of one chasing the other or putting pressure on the other. I think things in a natural way conspire to happen this for a good cause."

"I hope we don't disappoint them. I hope my team does well in the I-League. The team has already created history for Kashmir and a good performance in the I-League will further strengthen the football revolution in the state. I can't wait for the first match in Kashmir," he added.

"With a global player like Adidas as our partner, Real Kashmir is being recognised as a potential winner. Adidas' winning ways will surely rub onto us," said the other co-owner Sandeep Chattoo. 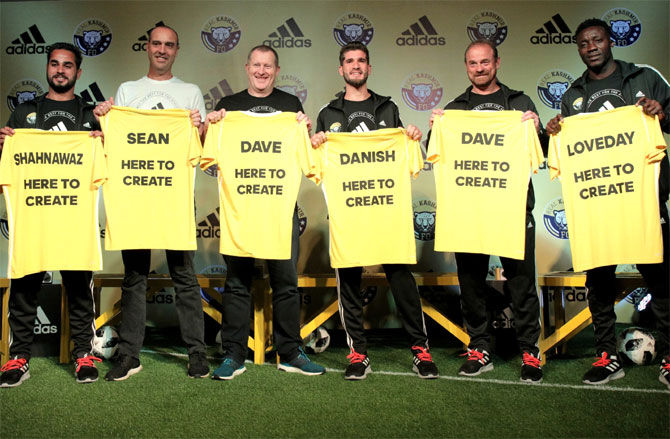 IMAGE: Real Kashmir FC's players during the event to announce the club's official partnership with Adidas.

Real Kashmir will open their I-League campaign against Minerva Punjab on October 31 in Panchkula while their first home match is on November 6 against Churchill Brothers.

"The match against Mohun Bagan in Srinagar on November 20 will be really huge and I am waiting for it," said Meraj.

Key player and mid-fielder Danish Farooq is overwhelmed by the development.

"I don't have any words, it is a dream come true. I never thought that Adidas will be our club's official partner," Farooq said.

"Now the responsibility is on us to perform well in the I-League and continue the craze for football in Kashmir," he added.

Head coach David Robertson from Scotland said the first two rounds will be crucial for his team and only then he will be able to say how well his side will fare in the I-League.

"I-League will be of a totally different standard than second division. There are big clubs like Mohun Bagan and East Bengal, besides other old and comparatively new clubs. As of now, I will not be able to say anything about my club," said the 49-year-old Robertson, who has played with some big clubs in Scotland besides representing his country on three occasions.

"The first match against defending champions Minerva Punjab will be a huge match, our debut. Then we play Churchill Brothers for the first time at home, that will be the first I-League match in Kashmir. These two matches will be historic. After these two matches, I will be able to know how good is my side and then I can plan for the remaining I-League."

Robertson played nearly 200 matches for the famous Scottish side Rangers, besides donning the jerseys of other top clubs like Aberdeen and Leeds United.

He played three matches for Scotland between 1992 and 1994. He joined Real Kashmir early last year after coaching a few lower level sides in Scotland and United States. 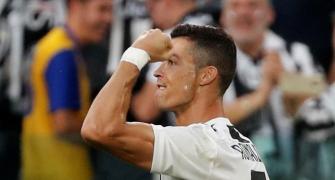