News
Business
Movies
Sports
Cricket
Get Ahead
Money Tips
Shopping
Sign in  |  Create a Rediffmail account
Rediff.com  » Sports » All you need to know about FIFA elections Crisis-hit world football governing body FIFA faces one of the most important days in its 112-year history when it elects a new leader on Friday hoping to usher in a fresh era after decades of tawdry controversy.

Delegates from more than 200 countries will vote for a new president to succeed Sepp Blatter, two days after the disgraced Swiss and European football chief Michel Platini lost their appeals against bans for ethics violations.

A wide-ranging set of reforms, which are designed to prevent corruption, will be voted on before the FIFA election and are expected to be passed. They include term limits for top officials and disclosure of their earnings.

Whoever takes over from Blatter, who ran FIFA for 17 years like a globe-trotting head of state, will inherit a very different job with the focus on crisis management, after dozens of international football officials were indicted in the United States last year for racketeering, money-laundering and bribery.

Jordanian Prince Ali Bin Al Hussein believes he is still firmly in the race however, while Frenchman Jerome Champagne and South African Tokyo Sexwale will hope to make an impact.

There was little indication on Thursday, though, that the vote would be anything other than a two-horse race between Sheikh Salman and Infantino.

"I am feeling good and very positive. The support I am receiving fills me with confidence,” Infantino said.

A spokesman for his Bahraini rival said: "Sheikh Salman is very confident about tomorrow’s vote."

The CONCACAF confederation for North and Central America and the Caribbean opted against endorsing a candidate and delegates suggested that support within the region was divided.

With no block vote from those 35 delegates, Africa's decision now looks set to be the decisive factor.

African countries make up more than a quarter of the 207 football associations eligible to vote. On the final day of campaigning, there were sharply conflicting versions of how they would cast their ballots.

While the vice-president of their continental federation said virtually all would back Sheikh Salman, several delegates told Reuters the African vote would be split.

Infantino has said he was confident of winning more than half of the African votes, while Liberian football chief Musa Bility predicted the possibly unlikely scenario of 27 of the region's votes going to Jordan's Prince Ali.

"The world is waiting and watching -- this is the biggest milestone in the history of FIFA. It will decide if FIFA goes ahead as we want or if it spirals down," Prince Ali told delegates.

Former anti-apartheid militant turned businessman and politician Sexwale described FIFA as broken and a damaged brand, though he also referred to some of those felled in the scandal as "friends we have lost".

Infantino repeated his promise to offer each of FIFA's members $5 million to invest in the sport over four years, more than doubling the $2.05 million each federation got from 2011-14. He said this could be achieved "easily" by tackling the cost structure of FIFA.

Bahrain's Salman was again more cautious, though, speaking of a 'realistic' increase in funding.

"For me, if the numbers are right, we can increase -- but I am not ready to mortgage FIFA’s future in winning an election."

French outsider Champagne took a shot at Infantino’s globe-trotting campaign by saying the election had been "unbalanced".

"I did not have a private jet to visit you, take a photo and then tweet and say I have got the endorsement," he said to laughter from delegates.

Prince Ali told UEFA delegates if he won the election he would appoint a European as his secretary general but did not offer up a name.

FIFA was plunged into turmoil by the corruption scandal that broke last year, beginning with a dawn raid to arrest delegates at a Swiss luxury hotel.

Criminal investigations led by the United States and Switzerland have spanned dozens of countries, focusing largely on the awarding of lucrative broadcast and marketing rights to the world's most popular sport.

They are also examining the process by which FIFA awarded the next two World Cups to Russia and Qatar.

Acting FIFA president Issa Hayatou appealed to FIFA members in what he called one of the most important weeks in the history of global football, calling on them to back the package of reforms on governance.

"I urge each of you to support the reforms in full here this week, and then to implement them to their entirety at home," Hayatou said in an address aimed at the six confederations that run football around the world.

"This will send a strong message that we have listened and that we are taking the action necessary to give football the foundation, and protection, it needs for the future."

© Copyright 2022 Reuters Limited. All rights reserved. Republication or redistribution of Reuters content, including by framing or similar means, is expressly prohibited without the prior written consent of Reuters. Reuters shall not be liable for any errors or delays in the content, or for any actions taken in reliance thereon.
Related News: FIFA congress, Gianni Infantino, Ali Bin Al Hussein, UEFA, Sheikh Salman bin Ebrahim Al Khalifa
COMMENT
Print this article 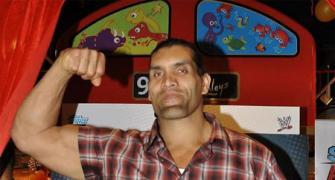 Pakistan team gets government nod to tour India for WT20 Watch out for this unknown teenager who rescued Man United