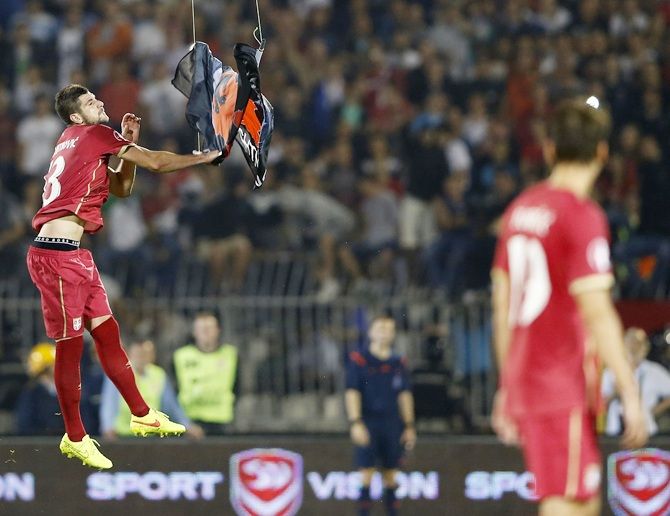 Stefan Mitrovic of Serbia grabs a flag depicting so-called Greater Albania, an area covering all parts of the Balkans where ethnic Albanians live, that was flown over the pitch during their Euro 2016 Group I qualifying match against Albania. Photograph: Marko Djurica/Reuters

The Serbian FA (FSS) blamed their Albanian rivals for incidents which forced Tuesday's Euro 2016 qualifier to be abandoned but will press for several dozen home fans who invaded the pitch to be charged, the governing body said.

The politically-sensitive Group I match was halted in the first half when a flag of so-called Greater Albania attached to a remote-controlled drone hovered over Partizan Belgrade's stadium before being grabbed by Serbia defender Stefan Mitrovic.

"It was a well-planned political diversion and, at the end of the day, it was the key factor which led to the match being abandoned,” the FSS said in a statement on Wednesday.

“All Mitrovic wanted to do was remove the flag so that the match could continue but the Albanian players attacked him. We also wish to point out that the home Serbia fans displayed no offensive banners at any point in time.

“However, there is no excuse for the pitch invasion by some individuals and after reviewing the footage the FSS will press charges against the offenders.”

A brawl between rival players broke out after several Albanian players snatched the flag from Mitrovic and then had to run for cover into the tunnel as the invading home fans attacked them while those on the terraces hurled flares.

After a delay of about half an hour, English referee Martin Atkinson abandoned the game, which stood at 0-0 in the 41st minute. Albania fans had been banned from attending the match.

Serbian media, and the country's foreign minister, put the blame on the brother of Albanian Prime Minister Edi Rama, with some media reporting that he had been arrested in the VIP stands of the stadium with the remote control in his hands. 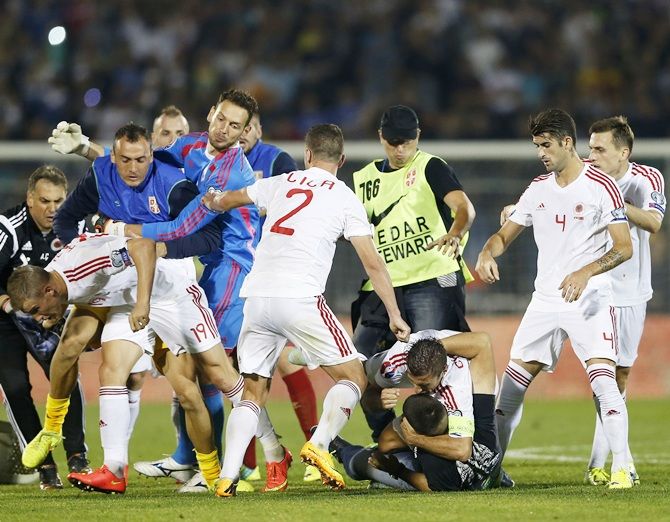 Olsi Rama, who is a US citizen, arrived in the Albanian capital Tirana on the Albania team plane and told Reuters he had been "taken aside" by Serbian police during the melee but not arrested.

"I've never used a drone in my life, only bought my son a toy helicopter," he said.

Albania's Litex Lovech winger Armando Vajushi, who was on the substitutes bench when the incident unfolded, told Bulgarian media on Wednesday: "It was like a war. You can't play football in a situation like the one in Belgrade. The whole stadium was filled with Serbian fans. "We only had a 50-man delegation that was in the VIP (stand). I can't say if our fan drove the unmanned airplane that waved the Albanian flag. "Fans invaded the field and started to hit us. Then we ran to the tunnel but nobody protected us. On the contrary, the policemen beat us! "Just before entering the tunnel I was hit by a police baton. He hit me in the knee, but it is nothing serious."

Vajushi, 22, criticised UEFA and said the governing body should have prevented the two nations being drawn in the same qualification group. "It’s UEFA's fault. How can they put us with the Serbs in a same group? They shouldn't allow such thing at all. Now they have to award us three points..." 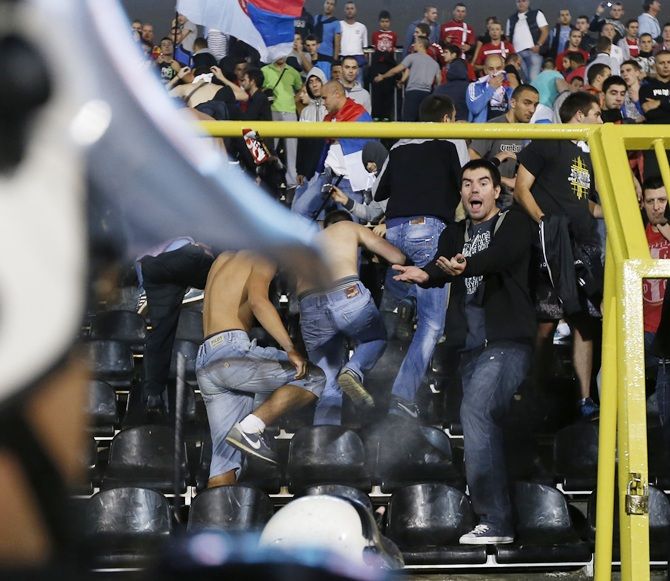 Fans of Serbia confront the riot police during the Euro 2016 Group I qualifying match between Serbia and Albania. Photograph: Marko Djurica/Reuters

On Wednesday, an Albanian fan group calling itself "The Smugglers" posted pictures on Facebook of a group of men posing with what appeared to be an identical drone, known as a quad-copter.

Under the caption "Deeds, not just words," one of the men, identified as Agron Sadiku, wrote: "This was not my idea, but that of my uncle's son, Egzon Feri. We never believed it would be done so successfully. I am very happy about it."

The stunt has further soured relations between the countries that hit their lowest point in the 1990s war in the former Serbian province of Kosovo, where ethnic Albanians are the majority.

The FSS slammed the Albania players and officials and accused them of being "accomplices to a plan whose sole aim was to force the game to be abandoned.

“The incident itself and the behaviour of the Albanian players, coach and staff leaves no room for doubt that they were part of a synchronised plan to stop the match,” the FSS said.

"Likewise, it is also scandalous that Albanians are gloating on social networks over a ‘job well done’ by individuals boasting of smuggling the drone into Belgrade.

“It is insulting not just to the FSS and the Serbian people but do we dare say to UEFA too.” 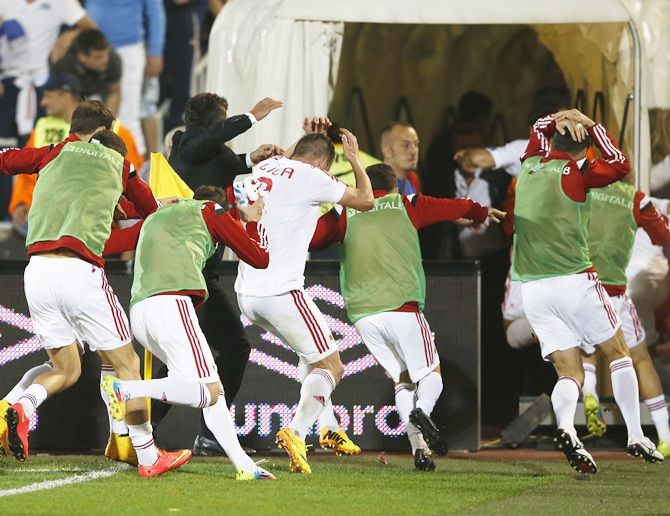 Albania's players retreat into the tunnel during their Euro 2016 Group I qualifying match against Serbia. Photograph: Marko Djurica/Reuters

UEFA have opened disciplinary proceedings against the Serbian and Albanian football associations following the violence that caused their Euro 2016 qualifier to be abandoned on Tuesday.

"Disciplinary proceedings have been opened against the Football Association of Serbia for the setting off/throwing of fireworks and missiles, crowd disturbance, field invasion by supporters, insufficient organisation and use of a laser pointer," UEFA said in a statement on Wednesday.

"Proceedings have also been opened against the Football Association of Albania for refusing to play and the display of an illicit banner."

The case will be heard by the UEFA Control, Ethics and Disciplinary Body on October 23.

"Football is supposed to bring people together and our game should not be mixed with politics of any kind," said the Frenchman.

His FIFA counterpart Sepp Blatter added: “Football should never be used for political messages. I strongly condemn what happened in Belgrade last night.”

© Copyright 2021 Reuters Limited. All rights reserved. Republication or redistribution of Reuters content, including by framing or similar means, is expressly prohibited without the prior written consent of Reuters. Reuters shall not be liable for any errors or delays in the content, or for any actions taken in reliance thereon.
Related News: UEFA Control, FSS, Football Association of Albania, Football Association of Serbia, Stefan Mitrovic
SHARE THIS STORYCOMMENT
Print this article 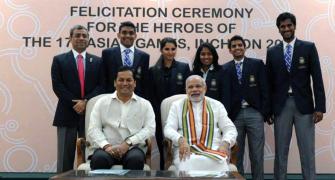 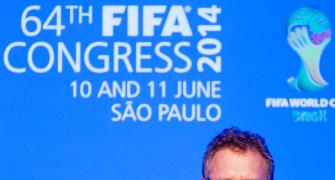 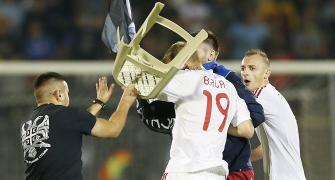 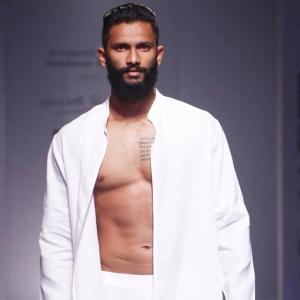 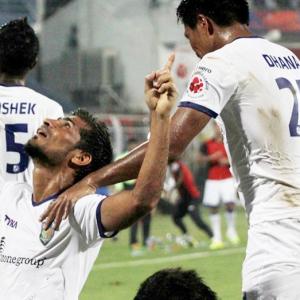