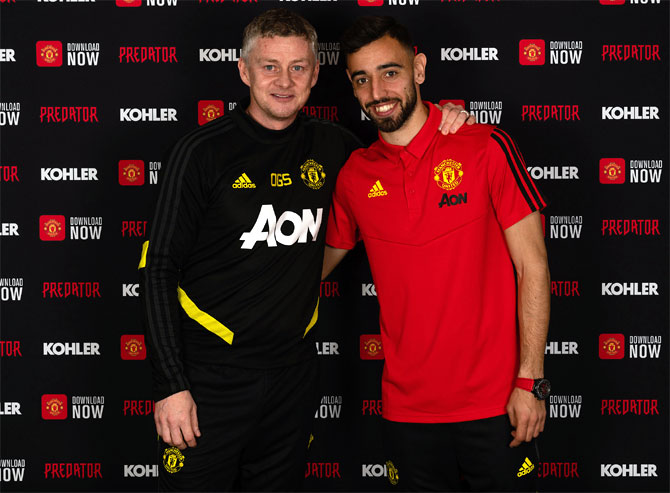 Manchester United completed the signing of Portuguese midfielder Bruno Fernandes from Sporting Lisbon on a 5-1/2 year contract, with an option to extend for a further year, the Premier League club said on Thursday.

Sporting had said on Wednesday that United will pay an initial fee of 55 million euros ($61 million) for the player, although the overall cost of the deal could increase with performance-related add-ons worth 25 million euros.

Fernandes recorded 63 goals and 52 assists in 137 appearances for Sporting, and had been linked with a move to Old Trafford over the last six months.

"We have been tracking Bruno for many months and everyone here has been tremendously impressed with all his attributes and what he will bring to this team," United manager Ole Gunnar Solskjaer said in a statement.

"Bruno's goals and assists stats speak for themselves, he will be a fantastic addition to our team and he will help us push on in the second part of the season.

"The winter break is coming at a perfect time for us to integrate Bruno into the squad and for him to get to know his team mates."

Fernandes has been capped 19 times by Portugal and was part of the squad that won the inaugural Nations League last year.

He becomes United's first signing of the transfer window and will strengthen the midfield in the absence of injured Paul Pogba and Scott McTominay.

"For me to now play for Manchester United feels incredible, I have worked hard to get to this moment and I can promise the fans that I will give everything for the badge to help bring us more success and trophies," Fernandes said.

PIX: City lose to United but hang on to reach final