Almost everyone in Gorakhpur has a story about an Adityanath intervention that helped push through a piece of work that would have been otherwise impossible.
Dhruv Munjal reports. 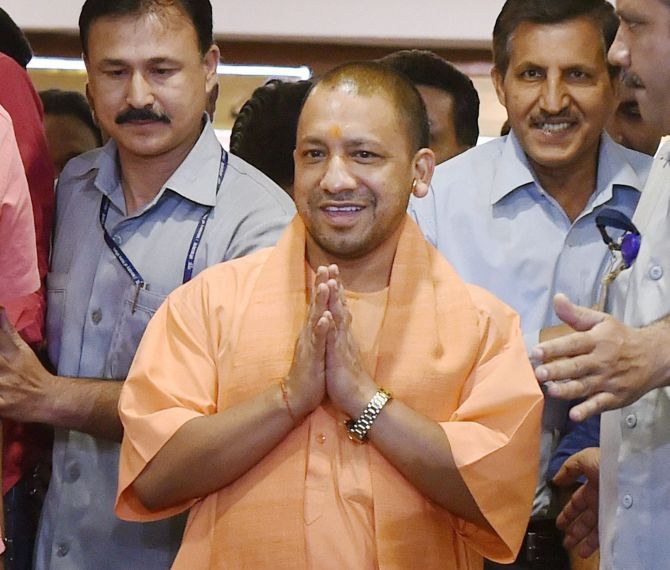 In the middle of a long rectangular room in the administrative block at Gorakhnath Math lies an empty chair. Its occupant now is a saffron towel draped over it.

The chair's master has gone missing for the first time in nearly 20 years, someone points out.

Some who make their way into the room after vaulting over the security ropes that surround the building show their veneration to the empty chair by bowing slightly, their right hand grazing their chest.

The city of Gorakhpur has messy traffic, derelict roads, unruly cattle that obstruct streets, and air thick with religiosity. But none of these is as ubiquitous as Yogi Adityanath, 44, the stocky, saffron-clad Hindutva icon and now Uttar Pradesh chief minister.

Ever since Adityanath was named chief minister, giant congratulatory billboards have swamped Gorakhpur.

Adityanath, despite being absent, is omnipresent.

Policemen guard the Gorakhnath temple, of which Adityanath has been head priest since 2014, round the clock. His rabble rousing has clearly fetched him enemies.

Inside the pink building that houses Adityanath's chair, Dwarika Tiwari has taken over his leader's responsibilities.

Tiwari, a genial man in his 60s, has been here for over four decades. He spent his early days serving Mahant Avaidyanath, Adiyanath's predecessor and political mentor, and is now a close aide of Adityanath.

From Adityanath's durbar, a gathering that is open to all locals at any time, Tiwari calls up city officials, and signs orders.

As one group leaves, another scrambles to take its place on the carpeted floor, where complaints -- ranging from medical bills to dowry harassment -- are heard.

Several landline phones lie strewn on the ground; a replica of the Ashoka Pillar in a glass case watches over the hassled audience.

Despite the open backwardness, there is reason why Adityanath is held in high acclaim in Gorakhpur: He is credited for turning around the city's healthcare with two hospitals that operate from within the temple complex.

The large crowd underscores how the government has failed to provide basic services to people here.

Dinesh Kumar Yadav wants Tiwari to speed up a police investigation. He, along with a few others, was duped of thousands of rupees by a man who had promised a new passport and visa for Dubai.

Asif Tauqir is here for his daughter's school admission. "The local school has been denying her admission for no reason. A letter from someone in Adityanath's office can change that," he says.

"Yogi ji has dedicated his whole life to the people. His sole motive of joining politics was serving them," says Tiwari.

Others fondly talk about his accessible nature.

"There are times when I've come to meet him late at night. Never have I been turned away," says Aditya Mishra, another visitor to the daily durbar.

It is clear that Adityanath's brand of politics is built around trust, more than religion.

'Maharaj', as Adityanath is affectionately called in these parts, is revered not so much for his staunch devotion to the cause of one religion but, as residents of Gorakhpur say, for his service to the people.

Almost everyone here has a story about an Adityanath intervention that helped push through a piece of work that would have been otherwise impossible.

Despite his incendiary speeches, Gorakhpur is a picture of inclusiveness.

Muslims in the city insist they adore Adityanath as much as Hindus. Many of his close associates are Muslims, women in burqas roam the temple complex freely, and several shopkeepers inside the premises are non-Hindus.

Perhaps the most telling example of this embracement is a biryani shop that operates from just outside the temple's entrance.

At first glimpse, there is little about Maan Mohammad that can convince you of his ability to do a job that involves strenuous labour. He is slight and walks with his shoulders hunched.

Mohammad is one of the caretakers at the temple complex's gaushaala, where he looks after more than 400 cows.

Dressed in a white embroidered shirt and black trousers, Mohammad says that despite being a Muslim, he has never faced any discrimination.

"There have been times when Maharaj has himself spent time with me here. That tells you something," he says.

Muslims in Gorakhpur acknowledge Adityanath's fanatical ways only reluctantly but hasten to add that his flagrant attempt at polarisation is merely electoral rhetoric.

Others describe the apparent friction between the two communities as a mythical creation of the media.

"Gorakhpur has a Hindu majority, and he is always trying to consolidate their votes. Yes, unpleasant things about Muslims are said, but he seldom means them," says Atiq-ur-Rehman, the owner of an electrical store in Dussheri Bagh.

In 2005, he carried out a purification drive, reportedly converting more than 1,000 Christians to Hinduism.

Two years later, he was arrested for disobeying police orders after an altercation between Hindu and Muslim men during a Muharram procession snowballed into a riot.

Tiwari feels that now as chief minister, Adityanath is likely to assuage his fiery instincts with a warm dose of togetherness.

"In his speech in Parliament after he became chief minister, he spoke about taking everyone along," he says, clinging on to hope.

Others say his words are often grossly misconstrued, and that his Muslim-bashing is selective.

"He has a problem with the kind of people who opposed the hanging of Afzal Guru, or those who celebrate a Pakistan win in cricket against India. What is wrong with that?" asks Ram Janm Singh, an Adityanath loyalist who is the principal of the Maharana Pratap Inter College, one of the over 40 institutions run by the Gorakhnath Mandir Trust.

Mustachioed and silver-haired, Singh has been associated with the temple for nearly 50 years. Since 2004, he has been doubling up as one of the few people who handle Adityanath's election campaigns.

A local Muslim cleric, however, says that Adityanath's schismatic approach may rear its ugly head on a dangerous scale one day.

"Muslims will not say this openly, but deep down, there is insecurity. He is not disliked because he keeps granting small favours to everyone, pushing his own greater agenda at the same time," he says.

"If you don't have a problem with any religion, then why say anything nasty about it at all?"

Adityanath's victory margins, much like his cult, have grown astronomically over the years.

The last general election was perhaps his only blip in recent times: the margin of victory stood at just over 140,000 votes. His win in 2014 was his fifth straight from the Gorakhpur Lok Sabha seat.

When he rose to prominence in the early 1990s, skillfully dislodging the local mafia, Adityanath, despite being a Rajput, made it a point to build relations with the Dalits and Other Backward Castes, thereby forming a potent winning combination in the years to come.

"If elections were to be considered as exams, then Adityanath has mastered the art of preparation. He just knows which books and what pages to read," says a Supreme Court lawyer who hails from nearby Khalilabad.

Adityanath's impassioned oratory, workaholic nature, hands-on approach and clean image have even spawned comparisons with Narendra Modi: He is talked about in the same breath as the prime minister in Gorakhpur.

Moreover, the absence of relatives who can leverage his position for undue benefits appeals immensely to people.

Sevaks at the temple say Adityanath sleeps only four hours a day, devoting all his time to meeting people.

"The other day, I got a call from him at 10 at night. Someone had left the college gate open and he was passing by. That's how involved he is," says Singh.

But any similarity with Modi can be quelled by the fact that little has changed in Gorakhpur ever since the people of the city elected Adityanath to represent them in Parliament in 1998.

His 50 acre temple complex is flourishing: The roads are slick, water fountains are aplenty, quality food is served in clean restaurants, and a general feeling of serenity prevails.

Outside, the picture is dismal.

Sewage drains languish in the open, garbage disposal seems like an alien concept, and the battered state of infrastructure shows no signs of improvement.

The local MLA, Radha Mohan Das Agarwal, handpicked by Adityanath, won the Gorakhpur Urban seat by almost 60,000 votes in the recent assembly elections. The Bharatiya Janata Party is also in power in the local municipal body. None of that has helped.

"Development here has been restricted to just the temple. Apart from that, there has been no progress in the last 20 years," says Rehman.

'Muslims will not say this openly, but deep down, there is insecurity.'
'He is not disliked because he keeps granting small favours to everyone, pushing his own greater agenda at the same time'

Most people rue the lack of employment, blaming Adityanath for neglecting industry.

Once upon a time, in the Muslim neighbourhoods of Zahidabad and Rasoolpur, a power loom could be found in almost every house. Now, with the textile business shrinking, most youngsters express a desire to migrate to West Asia in search of work.

The once-thriving sugar mills around Gorakhpur are in decline.

The plan to revive the sick fertiliser plant on the outskirts of the city -- an initiative engineered by Adityanath -- is moving at a tardy pace.

Modi laid the foundation stone at the plant in July last year, but workers here say demolition work began only two months ago and is expected to take at least a year to complete. Construction will start after that.

Despite the open backwardness, there is reason why Adityanath is held in high acclaim in Gorakhpur: he is credited for turning around the city's healthcare with two hospitals that operate from within the temple complex.

Perpetually teeming with patients, the super-specialty hospital at the far end of the complex is one of the best in the region.

A tiny door at the entrance opens into a spacious general ward, with nurses and doctors attending to hundreds of patients.

Opened in 2003, the hospital offers OPD visits for as little as Rs 30. Medicines are available at discounts of 5-50 per cent.

"Before he left for Lucknow, Maharaj used to meet each patient once every week," says Kameshwar Singh, additional director at the hospital.

Japanese encephalitis has crippled Gorakhpur's flood-prone plains for decades -- a major outbreak in 2005 saw over 1,000 perish -- but is now on the wane.

Adityanath's acolytes claim this is because of the hospital. As many as 438 cases of dengue were registered at the super-specialty hospital this past year, and Kameshwar Singh claims there were no deaths.

A branch of the All India Institute of Medical Sciences is also coming up along the highway that leads to Bihar.

To people cut off from rambunctious Gorakhpur, Adityanath is a maniacal proponent of Hindutva who wants to rid the world of all things anti-Hindu; for most locals, he is a do-gooder who raises religious passions once in a while only for political gains. 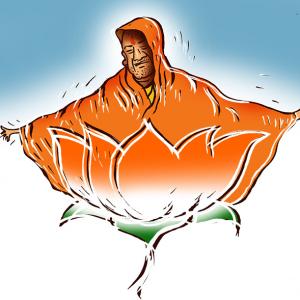