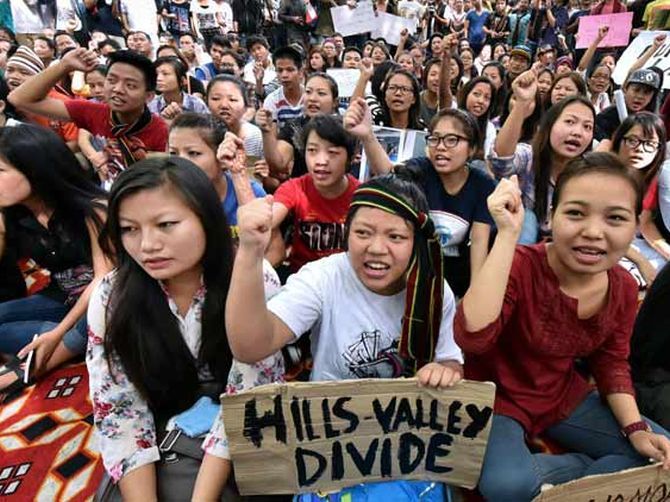 Nine tribal mothers in Manipur whose sons died as a result of police firing in August last year have dug in their heels and refused to bury them till such time as the government does not revoke three contentious bills.

The Congress government led by Chief Minister Okram Ibibi Singh has repeatedly expressed its inability to revoke the bills taking shelter under the garb that if it were to do so it would face 'major consequences' from Concom, the umbrella organisation of militant groups which operates out of Myanamar.

The genesis of the problem is that development in Manipur has taken place largely in the Imphal valley leaving the hilly regions out of its loop.

Benefits from educational institutions, health facilities and employment have been lapped up by the dominant Meiti community living in the Imphal valley while tribals belonging to the Kuki, Paite, Hmar Naga and Zomi tribes who live in the hill regions have not been able to prosper educationally or economically.

"We have serious reservations to these three bills which were passed," points out Mainio, coordinator of the Manipur Tribal Forum, Delhi. "They have been passed as a money bill without holding any prior consultations with the Hill Areas Committee. The drafting of these bills took place without any tribal representatives being present and that alone is a matter of serious concern for us."

"When we consulted former solicitor general Soli Sorabjee, he told us that these bills are completely unConstitutional," Mainio adds.

"The Protection of the Manipur Peoples Act states that those persons are of Manipuri origin whose names are in the National Register of Citizens, 1951, Census Report 1951 and Village Directory of 1951," explains Mainio. "Their descendants will on that basis classify to be called Manipuri."

"But the tribals are an uneducated lot and the majority at that time had not even heard of such a register. No village records were being maintained at that time nor was there any evolved systems of communication. Are all these people now going to lose their citizenship?" asks Mainio.

"That is a matter of tremendous concern for the tribals as this will not allow outsiders access to buy tribal land," Mainio adds.

The passage of the bills saw protests break out across the hilly areas. As tensions rose, protestors took to violence and arson and the police resorted to firing on August 31, 2015 in the Churachandpur district of Manipur.

Six boys died, one of them just 11 years old, while three other succumbed to their injuries the following day.

Nianglian, a friend of the nine mothers, whose boys have died, has come down from Churachandpur along with three other women to highlight what is happening in their state.

"The nine bodies of these boys have been kept on slabs of ice in a morgue located in the district hospital. We will not bury them till such time as these three acts have not been revoked," says Nianglian.

"These boys have become martyrs. Every day, members of the different tribes come together to sing hymns and shout slogans against the government. Earlier these tribals including the Kuki, Paite, Hmar and Zomis used to fight one another. The killings have succeeded in uniting all of them," says Nianglian.

"They now say that these boys died for a cause and they will be buried only when the demands are met," Ninaglian adds. "Churachandpur is in the centre of this agitation"

Buonozamawi, another Manipuri woman, says they have had to raise funds to travel to New Delhi especially since the local people are poor cultivators and were able only to give donations of Rs 10 to Rs 20.

These women along with members of the Manipur Tribal Forum, Delhi met Home Minister Rajnath Singh last week. The home minister has promised to do his best, but wants them to bury the dead.

They also met Congress President Sonia Gandhi who gave them a patient hearing. "Since Manipur is ruled by the Congress, we expected her to help us. She has sent for the chief minister to see how the situation can be resolved. But she asked us very specifically, 'Why was the Centre not helping us?" says Minzsial, one of the four Manipuri women who has traveled to the national capital from Manipur.

"We must provide better facilities for the people of Manipur," says Tarun Vijay, the Bharatiya Janata Party MP and president, Solidarity for the Youth of the Northeast. Vijay, who has been vocal in his support for the Manipuris, has raised the issue of the killings in Parliament.

Vijay also expresses concern about how "the entire North East is in the grip of unprecedented Christianisation with the help of foreign money."

The tribals are largely Christian while those living in the Imphal valley are mainly Hindus and Muslims. Culturally, the BJP has an affinity and sympathy for the Hindu population.

"With elections in 2017, it suits the BJP to allow this issue to simmer so that they can gain from the sympathy vote. That is the main reason why the central government is dragging its feet in the whole matter," alleges a senior member of the Manipur Tribal Forum, Delhi.

"We have met political leaders across all parties. And they all ask the same question: Why after eight months is the central government not moving to resolve this crisis? Civil society is crying out demanding a solution, yet nothing is happening," says another Manipur Tribal Forum, Delhi member.

"When we went to meet the chief minister he said he could do not anything as he was under pressure from the underground (militants) Meitie community who are living in Myanmar," the MTFD member adds.

The other equally crucial issue relates to the long history of subjugation and discrimination being faced by the tribals in Manipur.

Despite the fact that tribals across the country are covered by both the Fifth and Sixth Schedule of the Constitution, the Manipuri tribals are the only ones in India who are not protected by either Schedules.

"Initially, we were not covered because both Manipur and Tripura were princely states, but when the tribals of Tripura were covered by the Fifth Schedule, we Manipuris demanded we must also be included," he adds.

"Then prime minister P V Narasimha Rao had declared publicly that Manipuri tribals must also be protected by the Sixth Schedule, but this has not happened," says Romeo. "Are we any less Indians than the others? When we posed this question to Minister of State for Home Kiran Rijiju, he said this issue was linked with the Naga peace accord."

"But when we spoke to Naga leader T H Muivah, he told us, 'This is your Constitutional right, why should we object to it?" Romeo adds.

On December 9, a coffin rally was organised at Jantar Mantar in Delhi to mark 100 days of the Churachandpur killings. A similar, long-term, protest will be held at Jantar Mantar to highlight the Congress government's discriminatory practices in Manipur.

Protests in Churachandpur will continue till such time as the state government accedes to their demands. The four Manipur women who travelled to Delhi echo the sentiments of the public in their state.

"We will not bury our sons for another four years if need be," says Buonozamawi speaking for the aggrieved tribals of her state. "Let the world know the cruelty being practised against our young boys." 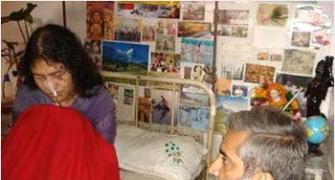 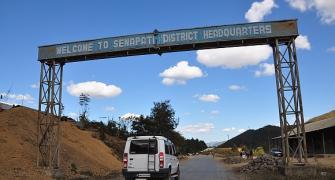 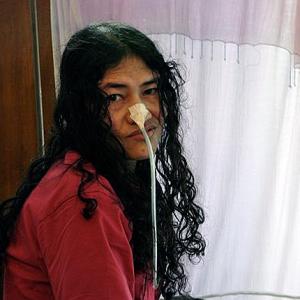