What the election demonstrated is that the BJP has a stranglehold on most of the Hindu votes in the Union territory, observes David Devadas. IMAGE: Top and below: Victorious candidates in Kashmir celebrate their triumph in the district and local bodies elections in Jammu and Kashmir. Photographs: Umar Ganie for Rediff.com

The results of the district and local bodies elections in Jammu and Kashmir have done nothing to push the basic demand of the People's Alliance for Gupkar Declaration (PAGD) -- the restoration of a state and special status. It was by and large not the issue on which the alliance partners contested, or voters responded.

On the other hand, the Bharatiya Janata Party election campaign did slightly more to make the election a referendum on its August 5, 2019 Constitutional changes -- and it too was not endorsed beyond the areas of its core base.

The seven constituent parties of the PAGD fared quite well, but the largest of them, the National Conference, would most likely have fared well even if it had contested the election alone.

That just continues the trend of the 2019 Lok Sabha election, when the BJP swept the Jammu division, the National Conference won all three seats in the Kashmir valley, and the Peoples Democraic Party fared poorly even though PDP chief Mehbooba Mufti herself was a candidate. A little-known retired judge fielded by the National Conference defeated her.

The politics of the former state would seem to be back on even keel, then, except for the emergence this time of the Apni Party, formed by businessman and former minister Altaf Bukhari after he broke away from the PDP.

The new party, which some in Kashmir think is soft on the BJP, not only won a dozen seats, including three in the Jammu division, it gave a tough fight in many districts, coming in second in an impressive number of constituencies.

The chief lesson of the election is that there is great enthusiasm for the as-yet-unfulfilled promise of development.

Ironically, among those elected are some who have in the past been vocal about a separate identity, even some who have condemned elections. A couple of them were even elected to represent established parties.

They have evidently had a rethink, which is all to the good.

The large voter turnouts (even in terror-affected south Kashmir, except for Pulwama district) indicate an increased awareness of the possibilities available, and eagerness to get improved local-level development. Contesting a limited number of seats as part of the alliance, the NC won most of the seats it contested in the valley, plus 25 out of the total 140 in the Jammu division, including one each in the Hindu-dominated Samba and Jammu districts.

Along with the Congress then, the NC is the closest thing to a pan-J&K party even today.

On the other hand, the BJP won two seats in the valley, and with convincing margins. It put a great deal of effort and money into its campaign in the valley.

The presumption among some BJP backers that the Jammu division was overall delighted with the constitutional changes of August 5, 2019 is clearly not well-founded. What the election demonstrated is that the BJP has a stranglehold on most of the Hindu votes in the Union territory.

Geographically, that vote is concentrated mainly in four of the 20 districts, in each of which the BJP won thumping majorities -- 13 out of 14 seats in two, and 11 out of 14 in the other two.

Its margins of victory were often huge in this belt -- sometimes more than twice the runner-up's votes. On the other hand, the few who defeated BJP candidates in these areas often won by slender margins.

That it has not been able to reach out sufficiently beyond that core base means that the BJP may find if tough to gerrymander whenever assembly constituencies are delimited.

The electorate was evidently polarised on communal lines in Doda district, which has a roughly equal population of Hindus and Muslims.

The election in the district were close fought; margins of victory were occasionally very small.

The BJP took eight of the 14 seats in the district, the Congress won four -- including former chief minister Ghulam Nabi Azad's native Bhales -- and the NC and an independent got one seat each.

The BJP's stranglehold on Hindu votes is further evidenced by the fact that the Panthers Party won just two seats in its bastion, Udhampur district, and rebel former minister Lal Singh drew a blank. Both Lal Singh and the Panthers Party have at certain times cultivated a pro-Hindu image.

The BJP expelled Lal Singh after he openly campaigned in defence of the accused in the rape and murder of a Muslim child in Kathua in early 2017. The Bahujan Samaj Party did better than his nominees, winning a seat in Kathua district.

The BJP's success at holding on tightly to Hindu votes indicates that its decision to ally with the PDP in 2015 to form a state government was strategically successful. By contrast, the PDP stumbled into a chasm between contrasting ideological stools.

The Apni Party made its mark after spending a great deal of money during the campaign. It will surely try its best to get its men elected to chair district councils wherever it can.

According to the grapevine, Bukhari is trying to win over other members even in districts where his party has just a couple of members.

If the Apni Party continues on this trajectory, it could replace the PDP as the valley's second party, which no doubt is his intention.

The Congress, which won nine seats in the Valley and 17 in the Jammu division, has shown that it retains chunks of votes in different parts of the state. It is likely to ally with the National Conference to elect a president in Poonch, Rajouri, Ramban, Kishtwar, and some districts in the valley. 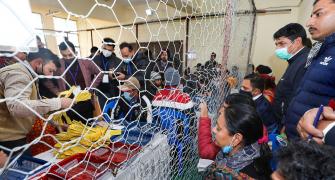 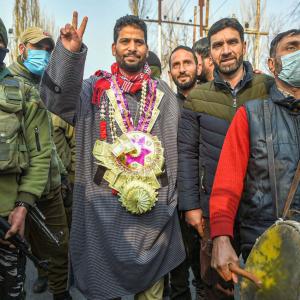