News
Business
Movies
Sports
Cricket
Get Ahead
Money Tips
Shopping
Sign in  |  Create a Rediffmail account
Rediff.com  » News » We are the Godses! 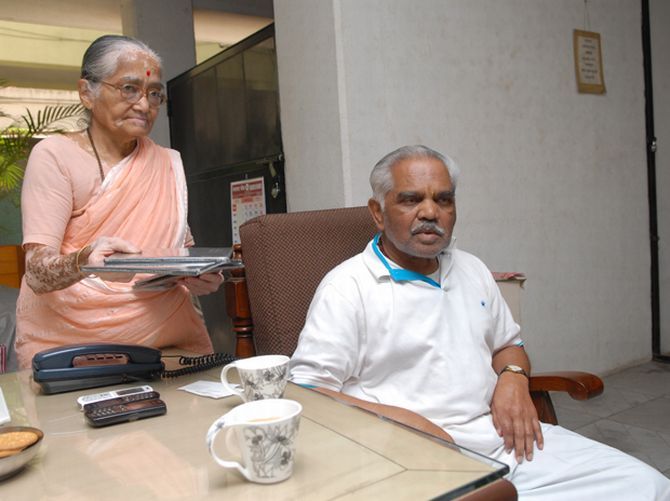 Nathuram Godse's nephew and niece in Pune see him as a devout nationalist, not a contract killer. Ranjita Ganesan finds a proud family that doesn't want to make God out of Godse.

Not many modern-day real estate offices require visitors to leave their footwear outside. Fewer still sell dreams of an “undivided India” as enthusiastically as they do 2BHKs.

Ajinkya Developers in Shivajinagar, Pune, is further unique in that its workspace doubles up as a home for the ashes and ideas of Nathuram Godse, Mahatma Gandhi’s assassin and the uncle of the firm’s founder, Nana Godse.

Hindu right-wing groups have recently expressed interest in building a temple and installing statues in honour of the man they project as “patriot” and “martyr”.

Despite this burgeoning support, members of the proud extended family maintain they do not want to make God out of Godse.

The devotion of Godse’s relatives, however, is revealed in the pristine white room set aside for the urn holding his ashes, which is encased in a glass dome and topped with a single orange hibiscus. The room is bare but for the overpowering fragrance of incense.

On one side are shelves lined with books by Godse’s brother, Gopal, and Hindutva proponent, VD Savarkar all for sale. A framed photo of the assassin also finds place next to blown-up images of the front pages of Dainik Agrani, later renamed the Hindu Rashtra, a newspaper Godse had founded.

A cabinet holds the clothes he wore on the day of the shooting in 1948 in New Delhi, bearing brown blood stains where he was stabbed by an angry bystander.

There is also the Bhagvad Gita he held when he was hanged. In a manner that suggests it is routine, the office help, Rajendra, brings out old plastic folders with fluorescent zips that clash with the historic documents inside them: papers related to the Mahatma Gandhi murder case. At the end of the visit, he opens a register to be signed by guests.

This private memorial has drawn people from the United States, Japan and France on occasion, says 82-year-old Nana, who has been preserving the objects for years.

Born to Gopal and Sindhu Godse, the former builder -- stocky with wide-set eyes -- first started working in a workshop fabricating iron grills and gates. It was a business his mother began when his father was imprisoned from 1948 to 1965 for helping plot Gandhi’s killing.

Over the years, he went into the construction business, but has now handed over the reins to his son, Ajinkya. Financial stability, he observes, has allowed the family to actively take up telling Godse’s version of history: that he was not a lunatic or contract killer, but a devout nationalist. Nana’s sister, Himani Savarkar, a leader of the Hindu Mahasabha and the extreme right-wing Abhinav Bharat, is a fellow custodian of Godse’s creed. Nana’s family helps too.

Nana typically meets reporters in the lobby of the two-storeyed Anandivilas, a building he developed and has been living in for five years. There is a makeshift office here with table, chairs and a telephone. His 75-year old wife, Advaita, sits next to him, serving tea and supplying names and dates when he forgets them. A paralytic stroke has affected his memory, says the mild-mannered woman, who retired as principal of a nursing institute.

Each year on November 15, the day Godse was hanged in 1949, the family gathers at their residence to read his final speech. The centrepiece at these congregations is an outline of “Akhand Bharat” that includes modern-day Pakistan and Bangladesh, fashioned out of glowing bulbs with a garlanded picture of Godse set inside.

In 1997, the Godses also formed a trust to give awards -- Rs 5,000, a memento and certificate -- to those who “work for the cause of Hindutva”. The awardees include Sri Ram Sene’s Pramod Muthalik, actor Sharad Ponkshe who played Godse in Mi Nathuram Godse Boltoy and, most recently, Aparna Ramtirthankar for “creating awareness about Love Jihad”.

Their last initiative was the release of May it Please Your Honour, an audio book of Godse’s final court address available for Rs 99. In two years, it has sold 25,000 copies, says Nana, adding that a group in the US recently sought permission to replicate and distribute the CDs.

He has also started a website that gives details of the urn, old photographs and offers access to “underlying truths”.

Interestingly, the site makes no overt mention of the crime, which is instead referred to as “patriotism” and “upholding Hindutva principles”. Further, while the family says Godse studied and had respect for all faiths, the site refers to Islam as “the other religion”.

In silent archival footage from the 1948 court trial at Red Fort, preserved by documentary company British Pathé, where others including close friend and aide Narayan Apte are seen laughing and chatting, Godse appears unsmiling, reflective, even sullen in a shirt buttoned all the way to the top.

Called Ramchandra at birth, Godse had to wear a nose-ring as a baby in the belief that this would ward off a curse that caused the death of three sons before him. This led to the name Nathuram (nath is Marathi for nose-ring). His family’s account paints Godse as a calm man who had no personal enmity with Gandhi but was driven by the leader’s “visionless politics” to commit murder.

As a boy, they say Godse wore a Gandhi cap and shouted satyagrah slogans. In his teens, after his postmaster father was transferred to Ratnagiri, Godse came in contact with Vinayak Savarkar and soon joined the Rashtriya Swayamsevak Sangh, and Hindu Mahasabha.

Godse, a Chitpavan Brahmin and high-school dropout, later ran a tailoring shop in Sadashiv Peth in Pune, mainly stitching shorts for RSS members. He enjoyed playing chess and the harmonium. When asked if Godse had any flaws or vices, Himani speaks only of indulgences like a love for coffee, using fork and spoon, and eating on a glass plate at the table, instead of sitting on the floor.

While running the Agrani and Hindu Rashtra from 1943 to 1948 out of a press in Narayan Peth, Godse criticised Gandhi’s methods.

To show that Godse’s recourse to violence was reluctant, Nana recounts how he pushed Gandhi’s attendants out of harm’s way before shooting him.

He cites another story of his uncle stopping his four-wheeler, a luxury in those times, and offering to drive a man and his injured child to the hospital. “He requested them to sit in the backseat because the sight of blood made him nauseous.” If the family is to be believed, Godse had no hatred for Muslims but was against appeasement of any religion. In his own court address, Godse condemned Gandhi’s increased influence in the Congress “since the year 1920 after the demise of Lokmanya Tilak” and accused him of anti-Hindu propaganda.

In his view, the practice of absolute non-violence would result in Hindu emasculation and lead to further division of the country.

The years following the assassination were not easy, says Himani. At school, parents urged children to not mingle, eat or speak with the young Godses. “We were treated like untouchables,” she says. For years, marriage proposals did not come her way. So when it was suggested that she marry Savarkar’s nephew, Himani agreed. Today, they are no longer ostracised, says the family, pointing out that its annual commemorative event is attended by 300 to 400 people, many of them uninvited. Formerly an architect, Himani says she switched to politics out of a sense of duty to follow in the footsteps of Savarkar and Godse.

Her stand on the Bharatiya Janata Party, which she had labelled “another Congress” in an interview once, has softened now because Narendra Modi is impartial to any religious community, says Himani, who is at the Shaniwar Peth home because it is a day off for the 67-year-old politician.

Godse’s ashes were reportedly salvaged from the banks of the Ghaggar by a Hindu Mahasabha volunteer who sent them to the family through one LV Paranjape in Nashik.

“Homage in the true sense of the term to Nathuram’s restless soul can only be paid if these ashes are immersed in the Sindhu nadi after India regains its sovereignty as an undivided nation,” says Nana and adds that his descendents will continue to pursue Godse’s last desire “no matter how long it takes”. 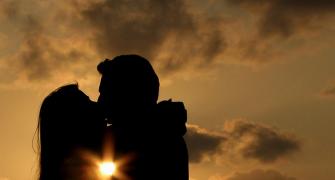 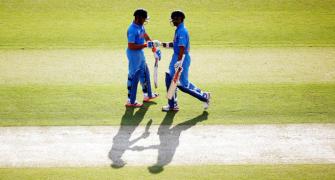 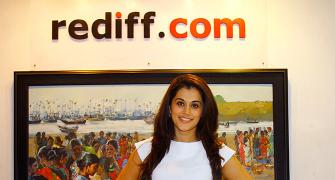 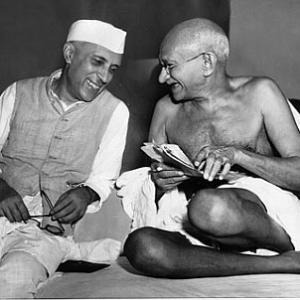 RSS denies link with journal report that said Godse should have killed Nehru, not Gandhi