'It all runs on sugar-coated lies.'
'If I like something, I will want to believe it.'
Ranjita Ganesan finds out how some organisations are separating fact from fiction to fight the ravages of the post-truth age. 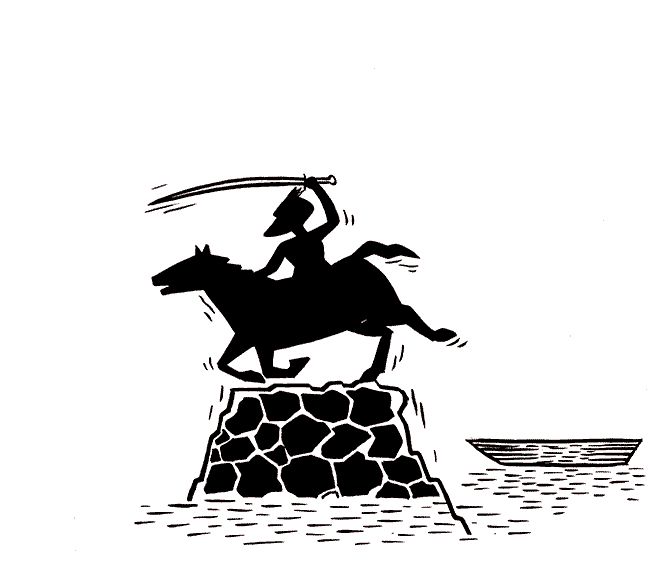 When a statue costs ₹3,600 crore to build, you want it to do more than just stand there.

So, citizens were relieved to learn when the Shivaji sea memorial was launched in December that it would be able to track movements of suspicious boats.

With the help of a renowned Finnish scientist, it would also tap enough solar energy to power all government offices in Mumbai.

The only problem, it would emerge later, was that all of these details -- listed in a WhatsApp message -- were entirely fabricated.

The news was first cooked up for a mocking piece on a Reddit forum, replete with the 'thumbs up' emojis that define messages forwarded on instant chatting apps, but it went on to be shared widely by unsuspecting people.

That is the tragedy of well-written satire -- its intentions can be gauged by very few.

In the last two years, such spurious news has gained momentum globally and in India, and its motives can range from mere mischief to well-oiled propaganda and financial gain.

In the past, satirical articles by Faking News have been taken to be true, including one about a man suing Axe deodorant after failing to woo girls like its ad promised.

It was revealed thereafter that Rawal's anger had been fuelled by comments falsely attributed to the writer in a report by a Web site, Times of Islamabad.

A more serious consequence of fake n,ews has been panic.

One woman was reported to have died in Kanpur after rumours of salt shortage during demonetisation led to chaotic buying sprees, and back in 2012, Northeast Indians fled Bengaluru based on messages inducing fears of violence against them.

Although rumours and dubious reports have existed for long, social media makes it possible to spread these across vast distances at real-time speeds.

"That velocity gives a feeling of veracity," says Govindraj Ethiraj, founder of FactChecker.in, which began in 2013 to scrutinise statements made by individuals in public life.

The fresh catch-all term for this is "fake news", which Harvard professor Jonathan Zittrain describes as information "that the person saying or repeating knows to be untrue, or is indifferent to whether it is true or false."

The wilful circulation of pro-Trump tales was said to have helped him win the US presidential election in November.

The unique thing about India is fake news here spreads primarily through a dark channel, WhatsApp, where messages are encrypted and cannot be read by a third party.

The country is its biggest market, with 200 million active users (that is roughly 15 per cent of the total population, or three times the population of France).

From viral messages on this platform, it would seem UNESCO's main objective is to foster national pride among Indians.

The organisation is falsely credited with having declared Narendra Modi the best prime minister, named Jana Gana Mana the best national anthem, and picked the Rs 2,000 note as the best currency in the world.

As incidents of misinformation online grow, some local services have popped up, starting from 2015 to as recently as four months ago, to debunk false claims.

To help friends and elderly relatives, in 2015 he began replying to spurious texts with detailed factual analysis.

He has gained 48,000 fans on Facebook and gets some 200 source-checking requests each day, although several are for the same material.

Recently, he warned followers there was no authentic data on the makers of Baahubali having donated first-day earnings of Rs 115 crore to soldiers.

It is usually the handiwork of enthusiastic fans, says Jain, or people drawn to particular religious organisations or political parties.

"It all runs on sugar-coated lies. If I like something, I will want to believe it."

He worries that "common sense is extinct" in the country.

Three weeks ago, he received a video claiming to show the beheading of Indian soldiers with chainsaws in Pakistan.

Through a search for just "beheading", he traced the video back to a Mexico gang war from 2011.

Jain's office is his Xiaomi smartphone, through which he reverse searches images on Google and does a frame-by-frame study of suspicious videos for two hours every night. Seeking the truth involves watching a lot of gory content but he "is used to it now".

The businessman has a counterpart in Bengaluru's Check4Spam, started by techie Shammas Oliyath and tech investor Bal Krishna Birla.

They point out that disturbing visuals can be shared without any trigger warnings here.

To rid themselves of the guilt of propagating something unconfirmed, people preface messages with "forwarded as received", says Birla.

Oliyath started the service two years ago and invited Birla last year for his expertise in handling the Web site and server.

The former spends his lunch hour and post-work hours going as far as page 15 or 20 of Google search to find posts from which material for new spam is lifted.

Volumes are high enough for him to seek an employee.

"Those who join Facebook, LinkedIn or Twitter are tech savvy to an extent. That's not the case with WhatsApp."

He notes how the recent lynching of seven people in Jharkhand was sparked by rumours of prowling child-lifting that villagers received on their phones.

While the app is available in 10 Indian languages, debunkers of dubious news deal only in English.

Pratik Sinha had been busting fake claims online for years, but co-founded AltNews some four months ago to move away from Facebook's "filter bubble".

The networking site employs algorithms that show users what they tend to like or click on, limiting the ex-software engineer's audience to people who already agreed with him.

Sinha makes no bones about his politics: He is not a fan of the right wing, but wants to engage with readers on that side.

A recent article of his -- debunking a fatwa that was supposedly laid on news anchor Rohit Sardana -- was shared by people across ideologies, Ahmedabad-based Sinha says.

"I put out a story only when I am confident that no one can refute it."

He exposed inaccuracies in their claims and wrote exhaustively on a few including Postcard.news, Hindutva.info, and Dainikbharat.org. Some posts took him 12 to 14 hours to investigate.

These sites, which are cheap and easy to create, see heavy traffic and make money, Sinha observes. 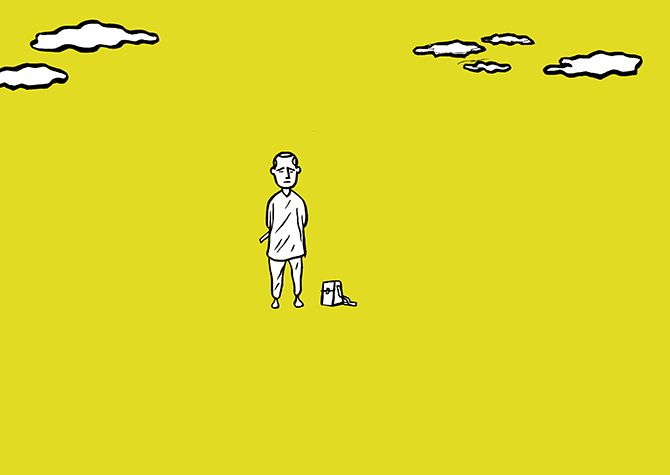 When contacted, Postcard.news denied the allegations, saying it appears to be "a premotivated target against Web sites speaking against Lutyens' establishment".

OpIndia, a site that purports to debunk lies of the mainstream media, did not respond to an e-mail seeking participation.

Sridhar Ponnada, a 42-year-old IT professional, says links from Postcard.news routinely appear on family WhatsApp groups. It even led to a disagreement with his cousin who did not like being told to verify facts.

"They build a story in such a way that it looks plausible. Initially, people with clear bias would share them, but off late it comes from educated, highly literate people too."

They are willing to suspend critical thinking, he says, and by the time a claim is contested, the damage is already done.

This reminds of political theorist Hannah Arendt's observation that movements 'conjure up a lying world of consistency, which is more adequate to the needs of the human mind than reality itself.'

In a bid to be neutral, hoax slayer Jain asks his readers to send fake news of various biases.

Jency Jacob, managing editor of Boom Live, cites the telling example of a photo of two young men covered in flames. "It has been shared by Hindus, Christians and Muslims in India, claiming they were members of their community."

But the picture is from a 2008 lynching of robbers in Pakistan.

With mastheads, photographs and bylines, sites purveying fake news wear a professional look. But it is journalism seemingly bereft of its greatest obligation -- journalism. The information-gathering process is unclear.

Pages often include sensational images and colourful adjectives. Still, many rank within the top 5,000 domains in India, based on Sinha's research using traffic statistics site Alexa.

A Google spokesperson says fighting scammers online is essential for the long-term sustainability of its business.

Some Web sites with phony content rely on Google's AdSense platform to show ads and make money, but advertisers do not want their brands to appear next to dubious content.

In November 2016, the company widened its policy to take action against deceptive sites and removed 200 publishers from its network.

Facebook says it is working with fact-checking organisations so that false news can be flagged as 'disputed' and will appear lower in the news feed.

Wikipedia is coming up with a service where journalists will collaborate with volunteers to fact-check news.

His team debunked various claims during the recent ransomware cyber attacks, including rumours that ATMs would be shut and that there were additional risks of a virus named 'Dance of the Hillary' destroying data.

Under extraordinary circumstances such as epidemics or disasters, the government should require networks like Facebook to send public service announcements, suggests Sunil Abraham, founder of Bengaluru-based think-tank Centre for Internet and Society.

Regulation and punishment is difficult, he says, because attribution is always a challenge on the Internet.

Citing Chinese communications Professor Lokman Tsui's prediction, he expects that the problem will go away on its own in a decade.

One step towards that would be if consumers educated themselves on the matter.

An international school in Mumbai has already started alerting students.

Its ready-reckoner on spotting fake news would be useful for adults too: Consider the source, read beyond headlines, check the author, date and supporting sources, and finally, check your bias.

Some schools in Bengaluru are set to follow suit, according to Check4Spam.

Also crucial will be the news receiver's ability to engage with people across ideologies before buying into anything.

This need was perhaps best summed up in a recent panel discussion by Armando Iannucci, British creator of satire-based television and radio.

On the lines of dating app Tinder, he wants to make an app that can match people with diametrically opposite views so they can have thoughtful dialogue. 'I would call it Ponder.' 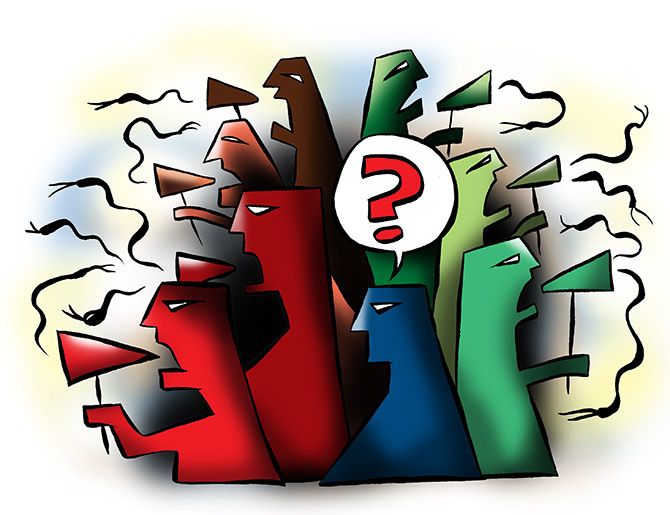 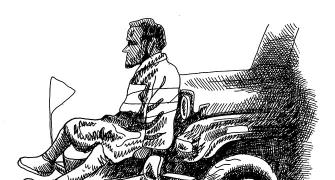 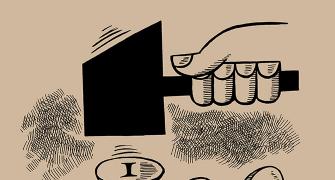