News
Business
Movies
Sports
Cricket
Get Ahead
Money Tips
Shopping
Sign in  |  Create a Rediffmail account
Rediff.com  » News » The faces that made Nitish the Vikas Purush

The faces that made Nitish the Vikas Purush 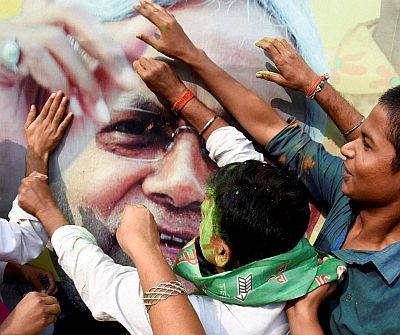 'I am a labourer's wife, the mother of labourers. But I won't be a labourer's grandmother for sure,' she says in the hope that her grandchildren will have a bright future in the Bihar that will unfold in the next decade.

Prasanna D Zore/Rediff.com catches up with Nitish Kumar's supporters who share their expectations from the Mahagathbandhan Sarkar. Chhatiyan Devi from Patna is a firebrand lady. She engages in a verbal scuffle with one of the photographers assembled outside the chief minister's residence for some reason. The photographer tries to pacify her, but she will have none of it. She stops her verbal fusillade only after the photographer apologises.

Ask her if she has come to meet Nitish Kumar and she is unstoppable.

"I am here to tell Nitish babu to pay attention to voters like us. He does help the destitute and women, but I would rather suggest that the next time when there is such a rush of people to meet him, he should ask his officials to have a separate line for women," she says, complaining how the affluent always get entry first.

She worked with the Bharatiya Janata Party till 2005. After that she has worked assiduously for the Janata Dal-United in her neighbourhood.

"We are also working hard for the party and we should be treated with respect," she says.

When the security guard manning the entrance to the cream and blue gate ask her to enter the chief minister's house amid the rush, she refuses.

"Main toh aaraam se jaoongi. Mujhe bheed pasand nahi (I will go after some time; I don't like crowds)," she says. When the crowd thinned, Chhatiyan Devi entered the main gate.

Later, as she emerged from Nitish Kumar's home, Chhatiyan Devi looks elated and tells me: "I told him his topmost priority should be development of the state and protection and employment for women. He shook hands with me."

A mother to two married daughters and two sons -- both labourers like their father -- Chhatiyan Devi is confident that Nitish Kumar will now be unstoppable when it comes to development in Bihar.

"I am a labourer's wife, the mother of labourers. But I won't be a labourer's grandmother for sure," she says in the hope that her grandchildren will have a bright future in the Bihar that will unfold in the next decade. Unlike Chhatiyan Devi, Sweta Biswas did not struggle much to get an audience with Nitish Kumar.

A general secretary of the JD-U's Bihar unit, Biswas says women overwhelmingly voted for Nitish Kumar because he is perceived as someone who will never compromise on women's security and upliftment.

"Women, whether they be upper caste Hindus, Muslim, backward castes or OBC (Other Backward Classes) or EBCs (Extremely Backward Castes), they know that only Nitish will fulfil their dreams."

The secret behind the Mahagathabandan's grand performance, she adds, was Nitish Kumar's leadership, honesty and style of functioning.

The chief minister, Biswas says, has never shown an iota of arrogance in his entire career in public life. He is their 'Vikas Purush' and that is why Bihari women -- who were perceived to be supporting Narendra Modi -- helped him stich up a commendable victory.

"Mahilayen khamosh rehti hai aur aaj BJP ne us khamoshi ki taakat dekh li hai (Women prefer to keep quiet and they have shown the strength of their silence to the BJP)." 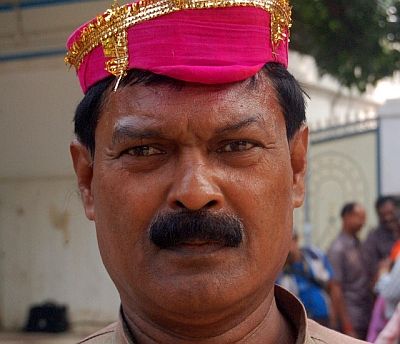 A resident of 40 Laukaha village in Madhubani district, Mandal knew the chief minister meets well-wishers after every election victory and has travelled almost 200 km to meet his hero.

"Nitishji had come to my house in Laukaha on February 20, 2014. He knows me and my family very well. He inquired about my father's health when I met him for a couple of minutes," he says. 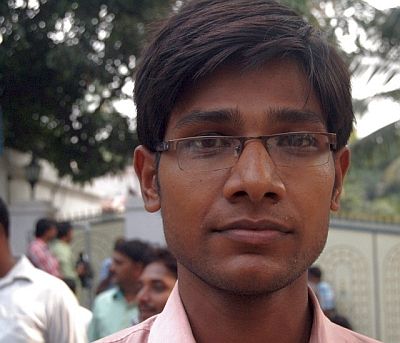 A first-time voter from Masaurhi, Patna, he says the chief minister's programmes that helped rural Bihar get good educational facilities, encouragement for girls to enrol in schools and rewarding them with bicycles for doing so and implementing corruption-free mid-day meal programmes in schools impressed him very much to vote for the JD-U.

His vote, he says, could have gone to the BJP too as he hero worships Narendra Modi.

"But Modi can't come and rule Bihar, can he?" he asks.

Nitish Kumar who met his namesake for two minutes asked the chief minister to ensure that incidents of rapes be erased from the state.

"Women should feel free to go out to work and lead an independent and fearless life like the men do in the state under Nitish's rule," the teenage Nitish Kumar says. 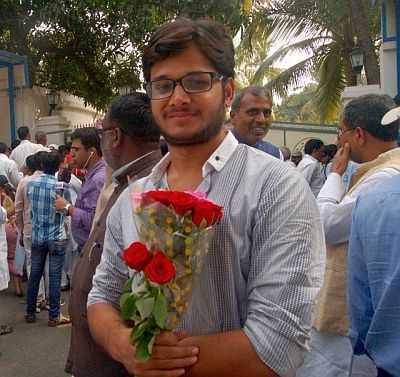 He is not overwhelmed by the large crowd that has assembled outside 7, Circular Road to meet the man of the hour.

He doesn't feel insecure that given these large numbers he won't get a chance to meet the Vikas Purush.

He has travelled 250 km from Bhahua to meet Nitish Kumar.

Khan had started a 20-team BPO in Bhahua, but could not sustain it for various economic reasons.

He now plans to shift to Patna and once again try to set up a voice-based BPO for domestic corporates.

"Now that Nitish has a very strong mandate," he says, "I am hoping that Bihar will see a huge jump in investments." Sunita Varma from Naubatpur, Patna, has come with her son, daughter-in-law, grandchildren and friends to meet Nitish Kumar.

She has come at a time when a large number of supporters were streaming out after meeting the CM. That gave the Varma entourage comfortable entry inside the bluish and cream coloured gates.

She emerges 30 minutes later, having had her share of handshaking with Nitish Kumar.

"Please mention that I am the chief of the Kushwaha Samaj in Naubatpur village," she says.

Ask her why she is not a supporter of Upendra Kushwaha's Rashtriya Lok Samata Party, she says, "Woh toh baar-baar dal badala karte hai (he keeps changing his political loyalties) and such people are not good for Bihar';s politics." 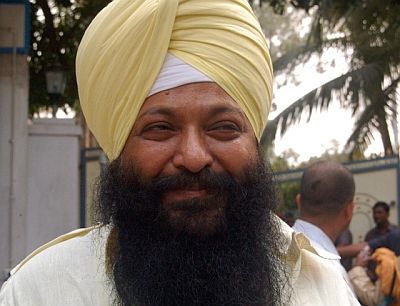 Jagjivan Singh, a businessman from Patna's Bankapur neighbourhood, has always been a Nitish Kumar supporter.

"There is nobody like him in Bihar today. He is the only one capable of taking Bihar to the pinnacle of development," Singh says as he comes out after meeting Nitish Kumar.

Ask him about the chief minister's mood after an unprecedented victory, Singh says, "Khil rahe hai; chehre per raunaq hai; chunav ki thakavat utar chuki thi (Nitish Kumar looked fresh and radiant. There were no signs of election fatigue on his face)." 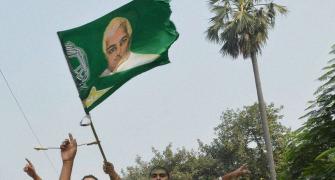 If Nitish wasn't chief minister, could the Mahagathbandhan have won? 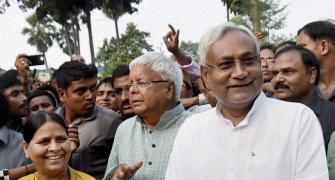 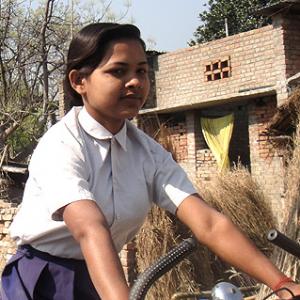 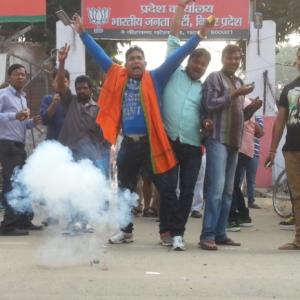