The essential guide to Scotland's vote on independence

On September 18, the Scots will vote on whether the nation should become an independent country.

The vote assumes significance as it could end Scotland's 307-year union with England and Wales as Great Britain -- and see it launch into the world as an independent nation of some 5.3 million people.

Here’s what you need to know about the landmark referendum. 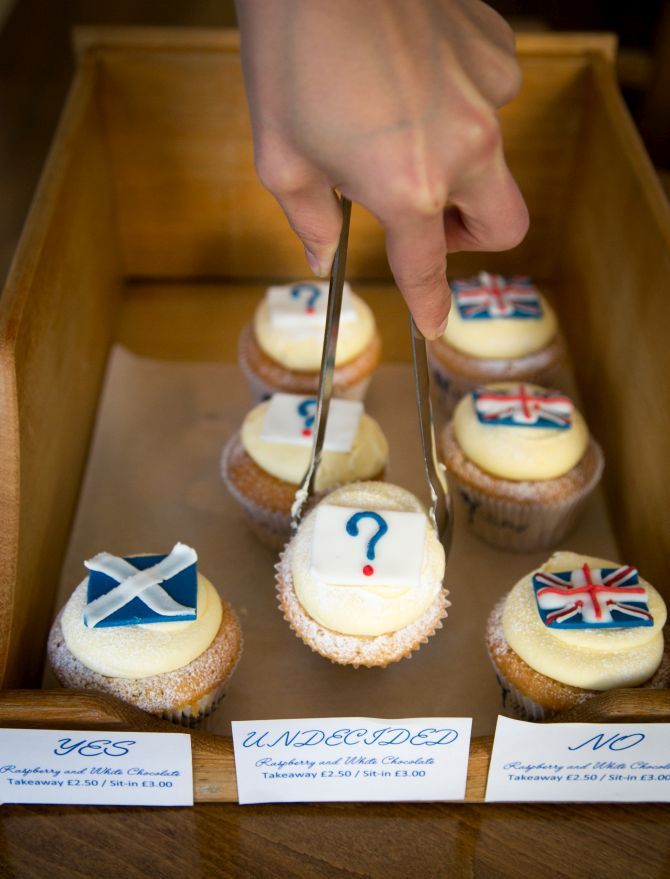 Cupcakes showing, yes, no and undecided are displayed in Cuckoo’s Bakery on Dundas Street on in Edinburgh, Scotland. Voters will go to the polls a week today to decide whether Scotland should become an independent country and leave the United Kingdom. Photograph: Matt Cardy/Getty Images

1) What are the Scottish voting on?

Scotland has been a part of the UK for over 300 years. Last year, Scotland reached an agreement with the UK to hold a referendum on Scottish independence. The Scotland National Party has an outright majority in the Scottish parliament and a referendum has been a longstanding pledge.

Basicall,y any Scot who is 16 or older on the day of the referendum will be able to vote. This means English or Welsh citizens who reside in Scotland can take part. But Scots who are living elsewhere in the United Kingdom or overseas will not be entitled to cast a ballot. It also means that the residents of England, Wales and Northern Ireland get no say on a historic change to the makeup of the United Kingdom.

3) What’s the history behind the vote?

Scotland has long had a testy relationship with its more populous neighbor. The Act of Union in 1707 joined the kingdom of Scotland with England and Wales, but many Scots were unhappy at being yoked to their longtime rival south of the border.

In the 1800s, Scotland’s economy strengthened, its cities boomed and its citizens took a leading role in the British empire. But proposals to give Scotland some form of ‘home rule’ within the UK have been live since William Gladstone’s era as Liberal leader in the 1880s. After several failed attempts at Westminster, notably in 1913 and 1979, a Scottish parliament was finally reestablished in 1999 in Edinburgh with wide-ranging policy making and legal powers but dependent on a direct grant from London.

Since 1999, Scotland has had a devolved government-- meaning many, but not all, decisions are made at the Scottish Parliament in Holyrood, Edinburgh. In May 2011, the nationalist Scottish National Party, which had campaigned on a promise to hold an independence referendum, surprised many by winning an outright majority in the Scottish Parliament. In October 2012, the UK and Scottish governments agreed that the referendum would be held, and the question to be put to voters was agreed on early last year. 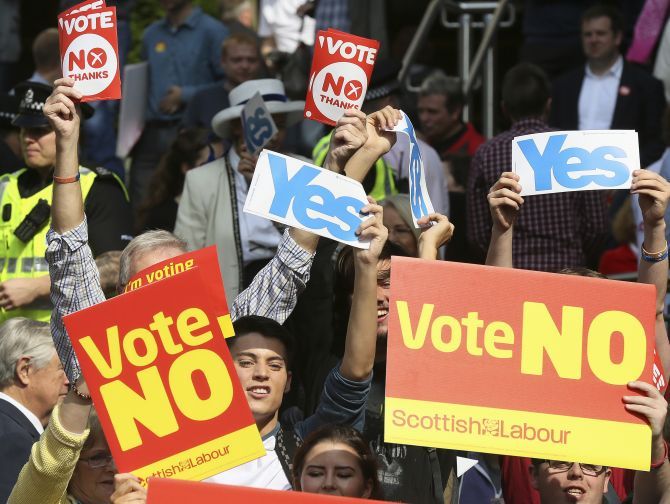 4) Who are the main players?

David Cameron has also spoken strongly in favor of Scotland remaining part of the United Kingdom.

And it’s not just politicians. Singer David Bowie, in a Brit Awards acceptance speech delivered by supermodel Kate Moss, pleaded, "Scotland, stay with us." Former Manchester United football club manager Alex Ferguson also opposes a split and has backed the ‘Better Together’ campaign. “800,000 Scots, like me, live and work in other parts of the United Kingdom. We don’t live in a foreign country; we are just in another part of the family of the UK,” he is quoted as saying.

Even US President Barack Obama has gotten in on the act. He acknowledged it was a decision for the people of Scotland, but added: “We obviously have a deep interest in making sure that one of the closest allies we will ever have remains a strong, robust, united and effective partner.”

5) Why is this vote significant for the rest of the world?

The question mark over Scotland’s future is already having an impact on domestic and international business. Some worry that the breakup of the United Kingdom could undermine London’s standing as an international financial capital.

Last month, 130 business leaders published an open letter in which they warned of the impact of uncertainty over issues including currency, regulation, tax, pensions, EU membership and support for Scottish exports.

A day later, more than 200 other business leaders signed an open letter backing an independent Scotland.

United Kingdom’s defence capability could be affected. The Scottish government says it wants to remove nuclear weapons from Scotland as soon as possible -- namely, the UK Trident nuclear submarine fleet based at Faslane. The Scottish government says, “It is our firm position that an independent Scotland should not host nuclear weapons and we would only join NATO on that basis.”

If Scotland chooses to split from Britain, it could give other people ideas. Spain’s Catalonia province, Canada’s Quebec province and France's Mediterranean island of Corsica would be empowered in their demand for independence too.

Further, if Scotland votes to leave, the British prime minister will likely come under pressure to resign -- although he has told UK media "emphatically" he will not do so. The major Westminster parties have promised to devolve more powers to Scotland if it chooses to stay in the union.

Alex Salmond wants to declare ‘Independence Day’ in March 2016, with the first elections to an independent parliament in May.

A ‘No’ result in the referendum could spell the end for the SNP as a mainstream political force.

8) What will happen to the Queen?

Alex Salmond has stressed that the Queen would still be "Queen of Scots" if the country votes ‘Yes’ on September 18. He maintained that the union of the crowns predates the union of the parliaments which he wishes to end. he said the Queen "would be proud" to be the monarch of an independent Scotland. 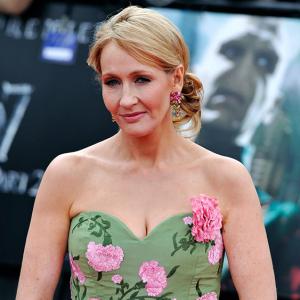