Religion can be a sticky subject in any part of the world.

Particularly so in India where it often also becomes a political hot potato.

Anil Couto, the archbishop of Delhi, would know, having recently found himself in the eye of one such storm.

In a letter, Couto had asked the priests in his parish and religious institutions under the Delhi archdiocese to 'pray for the nation' every Friday, especially given that the general elections were a year away.

It would have passed as a harmless call for prayer had Couto not gone forward and described the 'political atmosphere' in the country as 'turbulent', which, according to him, posed a 'threat to the democratic principles enshrined in our Constitution and the secular fabric of our nation'.

The reaction to the letter was not surprising.

Expressing their displeasure, ministers from the Bharatiya Janata Party-led government at the Centre termed Couto an isolated voice from the Indian Catholic community.

'I have not seen the archbishop's letter, but I want to say India is one of those countries where minorities are safe and no one is allowed to discriminate on the basis of caste and religion,' he said.

The letter was 'not appropriate', added BJP President Amit A Shah.

'Godmen are supposed to stay away from politics,' he said.

Ironically, it was the vehement response to Couto's edict that gave his letter unusual fame.

While the letter was written and issued to the parish on May 8 and was read out during Sunday Mass on May 13, it catapulted into mainstream news only after BJP heavyweights took it upon themselves to register their disapproval.

Though the letter steered clear of naming any political party or leader, it said it 'looked forward' to a 'new government'.

That is perhaps what irked the government.

Couto has since clarified his stance, and his letter.

'What I said is, spend time once a week for our nation and especially because elections are coming and government concerns all of us. So it is not in any way pertaining to the government of Narendra Modi,' Couto was quoted in a Press Trust of India report.

The 63-year-old archbishop has since refused to speak on the matter. An e-mail requesting an interaction with Couto remains unanswered.

Goan by birth, Couto was ordained as a priest for the Roman Catholic archdiocese in Delhi in 1981. He served as the bishop of Jalandhar in Punjab and the rector of the Delhi archdiocesan minor seminary in Gurugram, Haryana.

He was appointed archbishop of Delhi in 2012, a position he continues to hold.

Couto's instructions, though politically charged, are not unusual or unprecedented.

There have often been instances of priests speaking about politics in pockets with a substantial Christian population, especially in Kerala, Goa and the north east, particularly during election season.

Couto's, too, would have remained a community-specific voice had it not been for the outrage that ensued. 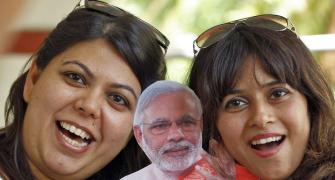