'Nothing differentiated us, neither religion nor money.'
'We were all in a crisis together and we survived together.'
'We plan to assemble on the bridge every year on the same day, to thank for giving us a second life.' 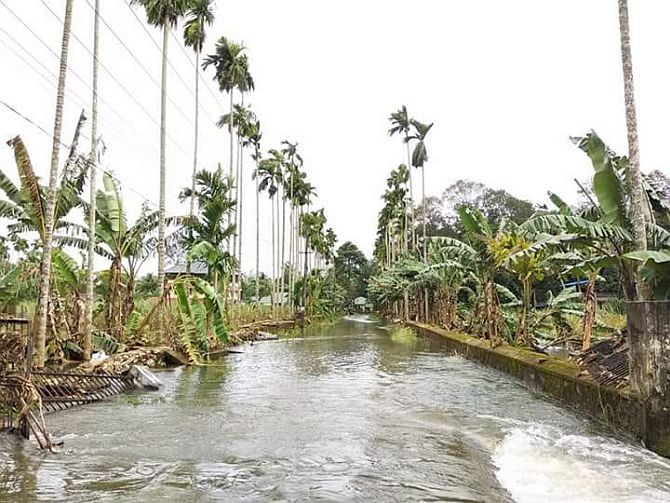 The story of how Annie Mol Jacob and 99 others survived inside a tent on the Tiruvalla-Podiyadi-Kallungal bridge, above the Pamba river for four days, seems like a thriller.

But then life presents situations that are stranger than fiction.

Podiyadi in Pathanamthitta district, bordering Alleppey and Tiruvalla, has two rivers, the Manimala and Pamba, flowing on two sides.

Annie Mol tells Rediff.com's Shobha Warrier how a bridge saved 100 people who sought refuge on it for four days.

On the 14th night, I got a call from a relative that there was a massive landslide at Konni and there were chances of flooding in our area.

After my husband passed away ten years ago, I have been staying alone in an independent house with a small dog giving me company.

So, news like that rattled me a bit. Fearing the flood waters would reach my house, I started keeping all my stuff in higher places.

By 4 in the morning, we started hearing announcements from the panchayat on loudspeakers asking us to be alert.

When I got up in the morning, I could see water almost reaching the front gate. That sight did not worry me much.

Whenever we had floods -- which used to happen often during the monsoon -- water used to come up till the front gate.

By the afternoon, I knew it was going to be very grave. The water was rising alarmingly and had reached the steps. It had never happened all these years.

By then, my 76-year-old mother-in-law had waded through more than knee deep water to fetch me. She was worried about me staying alone in such a conditions.

Both of us went to her house which is only slightly higher than my house. She wanted me with the others and not alone in case the water rose even more alarmingly.

It rained incessantly the entire night. We heard about the Pamba river overflowing dangerously.

When we got up in the morning, we saw water all around our house. We could not step out.

The water was dangerously close to entering the house. By then, we knew we had to call for help.

There was no way we could wade through, and even if we tried to swim, we had no idea where the strong currents would take us.

We could see nothing but water all around us. My mother-in-law's house is located in the middle of a huge expanse of land and there is no other house close to ours.

A small canoe came by 3 pm and all five of us were taken to the Kallungal bridge nearby.

By the time we reached, there were already 70 or 80 people, rescued from nearby areas, stationed on the bridge. 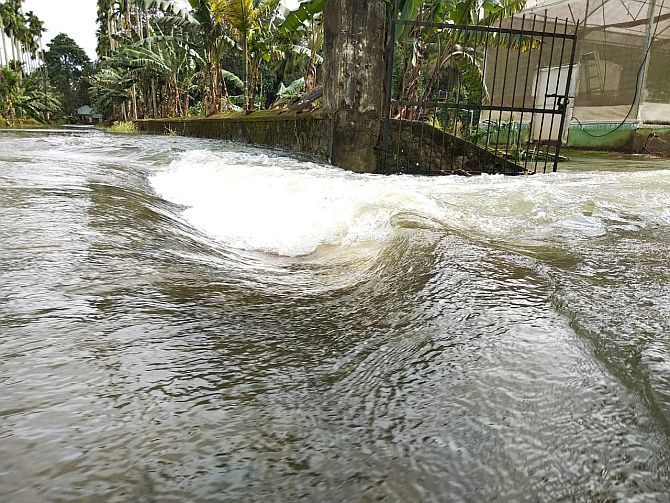 This bridge, which became a shelter for 100 people, was constructed at a huge height over the Pamba river. There was much criticism in the area about its height when the bridge was being built. Many people asked: Why does a bridge have to be so high?

Now, we know why it was built so high -- to save the people of this area one day.

The bridge has not been opened to the public yet and even before its opening, it has served as a shelter for so many people.

Because of the height, people were sure that water would never enter the bridge even if the situation worsened. The bridge is at least 15 feet above the river.

At night, many people parked their cars and scooters on the bridge so that they would not be washed away.

When we arrived at the bridge, we found young men in the process of building a shelter using the bricks, rods and sheets left over from the construction of the bridge.

I have nothing but love and respect for these youngsters. They may not be educated, but look at the way their innovative mind worked!

The innovation did not stop with the tent. Because so many people had parked their cars on the bridge, these young men used the car batteries to charge mobile phones.

Unless we had working phones, there was no way we could communicate with the world outside the bridge.

This tent became a refugee camp for all of us for four days, saving us from the rain and the floods. 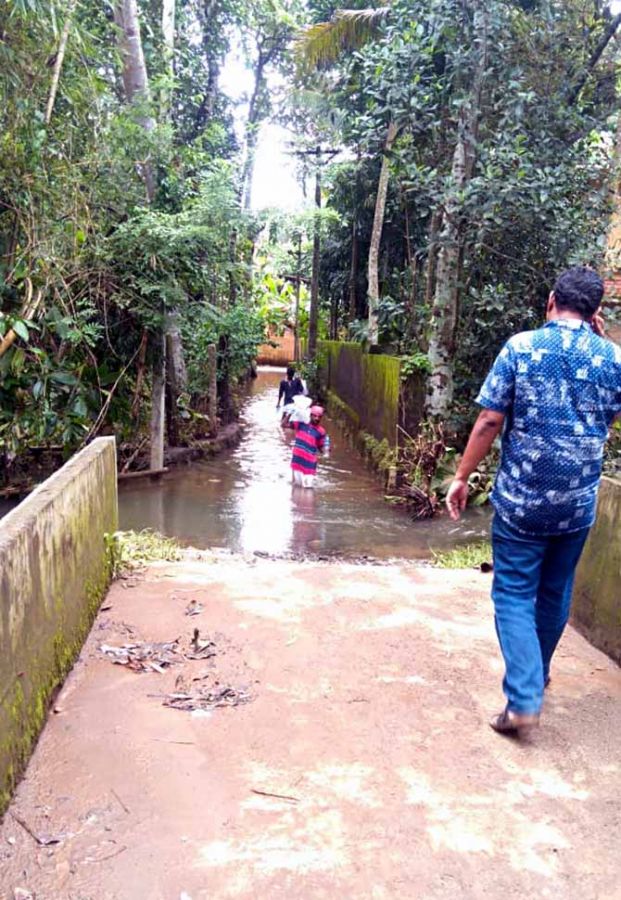 Once the tent was ready, the young men paddled in a canoe to houses close to the bridge. All these houses were totally under water, but people had kept their belongings on the loft.

The youth made several such trips to these houses and brought gas cylinders, stoves and whatever food they could gather from the houses.

The young women cooked and we had rice at night.

We survived the night though it rained heavily.

The winds were so strong that we thought the tent would fly away.

We hardly slept that night. We just prayed. We realised that when we were praying, we forgot everything, all the fears and anxiety.

I knew the water would not rise another 15 feet to reach us on the bridge, still scary thoughts came to mind.

I thought if we were washed away, nobody would get our bodies. In such a scenario, we would not even have a good funeral. I was not scared, but these thoughts haunted me.

On the second morning (August 17) I can't say we woke up; we hardly slept. They had cooked upma for all of us.

What I ate on the bridge was the tastiest food I have eaten in my entire life.

We spent the entire day talking and praying. When we saw that the water was not rising, all of us felt a little relieved.

By this time, so many people, including my children, were sending messages to various helplines and also posting about our plight on the Internet. 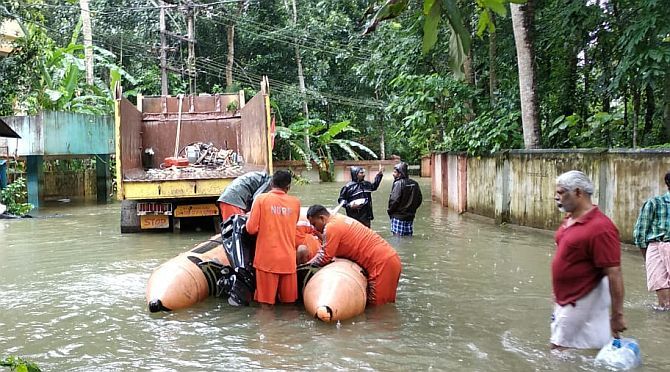 On the third morning (August 18) four boats came to rescue us. They were experienced fishermen from Kollam, but the flow on the Pamba was so strong that they could not bring the boat close to us.

Finally, when one boat was able to come near the bridge, 20 of us somehow got into it. But the way the boat behaved uncontrollably in the strong currents scared us and we got out.

We didn't want to drown in the river. We preferred to remain in the tent. At least we were safe there.

That day, the Indian Air Force dropped food packets for us. Somehow, the day passed with us talking and praying again.

The fourth morning (August 19) dawned. From the food packets we had bread and the wait for a rescue team continued.

By the afternoon, we saw an army boat coming to fetch us. Because the boat was big, it could move through the fiercely flowing water without difficulty.

The soldiers assured us that they would drop us to a safer place and that we need not worry at all. Except those who had their animals in their houses, the others got into the boat. 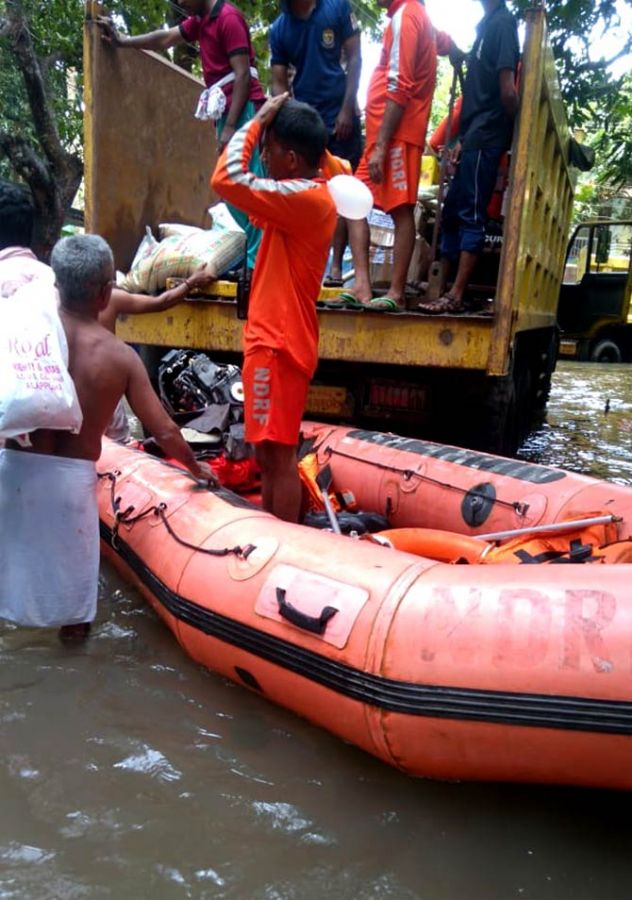 After three nights and three days, we started moving from our temporary home on the bridge. On the way, the soldiers rescued people trapped on the second floors of their houses.

We were dropped near the Sri Vallabha temple at Tiruvalla which is around 4 kilometres away from the bridge. There was water there too, but it was manageable.

We waded through the less than knee deep water and entered a home awaiting our relatives.

My nephew soon arrived to fetch us and by the evening, we were home. Our ordeal had ended.

Was I relieved? I don't know.

I know I was not that excited to be back where it was safe. There was a kind of numbness inside which made me quite calm.

WATCH the VIDEO: Life on the Bridge

I thank God for giving me such an experience and teaching me some lessons which will hereafter guide me.

We are nothing in front of the Supreme Being and Nature.

Inside the tent, there was no Hindu or Christian, rich or poor, we were all human beings.

Nothing differentiated us, neither religion nor money.

We were all in a crisis together and survived together.

We cooked together and ate together. We slept together.

And we prayed for the safety of everyone.

For us, the bridge is like God, our saviour, and we want to remember it till we die.

We plan to assemble on the bridge every year on the same day, to thank for giving us a second life.