News
Business
Movies
Sports
Cricket
Get Ahead
Money Tips
Shopping
Sign in  |  Create a Rediffmail account
Rediff.com  » News » Terror attacks: 'India can be restrained for only so long'

'Pakistan has to take responsibility and start cracking down on terrorists.' 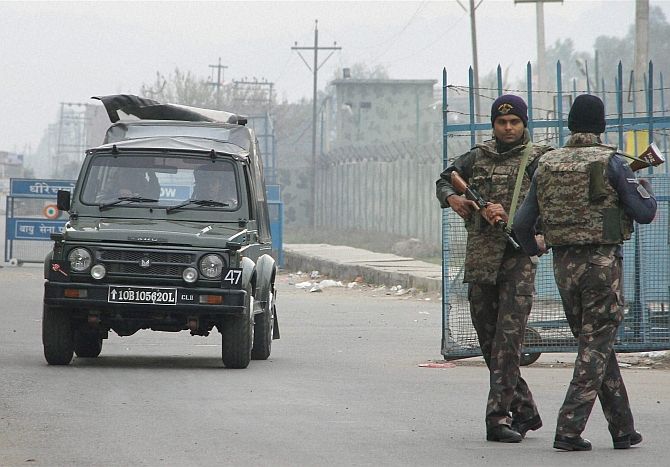 "India can only exhibit restraint for only so long after these repeated terrorist attacks emanating from Pakistan," United States Congressman Dr Amerish 'Ami' Bera told Rediff.com in an exclusive interview.

"Pakistan -- its government -- has to take responsibility and ownership that they have all these home-grown terrorist groups that in some ways they can't distinguish from good terrorists versus bad terrorists," Dr Bera, the only Indian-American Congressman in the US Congress, asserted.

"They have to take responsibility and start cracking down on those terrorists," he added.

Dr Bera, who is co-chair of the Congressional Caucus on India and Indian Americans, said the thrust of the CODEL's discussions in New Delhi centered around US-India security and counter-terrorism.

US lawmakers and the US Congress, he said, were in total sync with the Government of India's contention on this issue and that the restraint India has shown through the years, from 26/11 to the Pathankot attack, can only last so long.

The CODEL's discussions, which took place a few days after the Pathankot attack, also centered "a little bit about the prime minister's surprise visit to Pakistan on Christmas Day, and again, we'd like to see decreased tensions between India and Pakistan."

"We applaud the prime minister's initiative," Dr Bera (below, left, at an India Abroad Person of the Year event) said, showering kudos on India for the "restraint India has demonstrated post the air force base attack."

The US lawmakers who accompanied Bera were Representatives Brendan Boyle of Pennsylvania, Derek Kilmer of Washington state, Juan Vargas of California -- all Democrats -- and Billy Long, Missouri Republican.

"We were guests of the Indian government. They originally reached out to me and Congressman (George) Holding (North Carolina Republican and co-chair of the India Caucus) to try to put together a group of Democrats and Republicans focusing particularly on members who had never been to India," Dr Bera said.

Holding, he said, "had to cancel at the last moment. So the four members who went, it was their first trip (to India) and the focus was on national security and counter-terrorism." 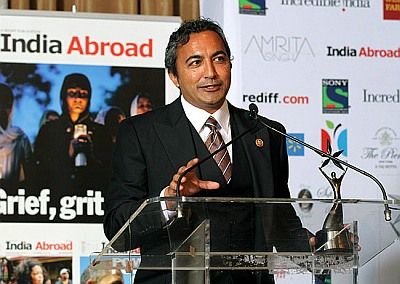 "Both Congressmen Kilmar and Vargas have large naval presences and we talked a lot about joint naval exercises," Dr Bera explained, "and, of course, obviously there was a lot of discussion about Pakistan as well."

"And, of course, economic cooperation also figured a lot in our discussions," he added, particularly during the CODEL's visits to Bangalore and Mumbai.

What "came up a lot on the Indian side was that the prime minister is really focused on making India an easier place to do business and improving the ease of doing business in India, and that came up a number of times in our conversations and just checking with our companies, it does seem like things are getting a little bit easier in India," Dr Bera noted.

For the members of the CODEL who had never visited India before, Dr Bera acknowledged it was clearly a learning and educational experience and "part of the goal was for them to get to know India a bit better -- the opportunities for partnership, both economically and strategically."

"And," he added, "in going to Bangalore, they got a sense of the Silicon Valley of India from the technology companies, and then in Mumbai, a sense of the financial services sector and the big multinational corporations."

Asked if he and Holding selected the members for the visit or if it was done by the Government of India, Dr Bera said, "It was largely the Indian government -- we were guests of the government, but we made some suggestions on the types of members."

"We suggested that given the real growing strategic relationship between our navy and India's navy, it would be interesting maybe to reach out to some members that had in their district, large naval presences and bases, just so that those members would get a sense of how much we were doing with India."

"(But) It was the Indian government's decision -- they wanted to focus on members who also had never been to India, and again, unanimously, the members really enjoyed their experience."

In Delhi the CODEL was hosted by US Ambassador to India Richard Rahul Verma who accompanied them to all the meetings but also provided them with extensive updates and briefings on the status of the US-India strategic partnership, particularly following the high-level meetings between Prime Minister Narendra Modi and President Barack Obama and other senior American and Indian officials.

"Rich is doing a great job," Dr Bera said. Asked about the status of the US-India civilian nuclear deal, which has been in limbo for seven years in terms of implementation, and Verma's prediction that it would be done this year, the Congressman was optimistic.

"At this juncture it seems like Westinghouse is exploring and moving forward, but GE, I think, is sitting back a little bit."

"In the context of the liability issue" -- which approved by the Indian Parliament which had put the brakes on the commercialization of the deal and given US companies not just to pause but have much concern -- "there's now a framework by which some of our companies may be satisfied with."

"The progress is slow," Dr Bera acknowledged, "but I believe it's in the right direction." He was hopeful that as Ambassador Verma had predicted, the implementation of the deal could become a reality by the year's end. 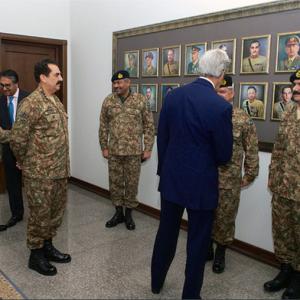