Menon-Rao behind soft line on Karmapa?

The government's sudden decision to go easy on the Karmapa and allow him to stay and to allocate one piece of land in Himachal Pradesh for him to build his own monastery, is the result of the SS Menon-Nirupama Rao line prevailing over the more hardliner view, top sources in the establishment have told rediff.com.

At a high level meeting held a fortnight ago, the NSA and Rao overruled past and present evidence and government reports terming the Karmapa's presence in India as "prejudicial to national security interests,' saying that one last effort should be made to win him over.

Given the pre-eminence that Menon enjoys in this government, this view has been grudgingly accepted as the official line but officials in the home ministry, Intelligence Bureau and the Research and Analysis Wing point towards two past reports that had elaborated why the Karmapa should not be allowed to stay in India.

In 2003, an inter-ministerial group under the then joint secretary, ministry of external affairs, Nalin Surie (India's current high commissioner to London) and comprising officials of the MEA, ministry of home affairs, ministry of defence, IB, RA&W, concluded: 'The Karmapa's presence (in India) is prejudicial to India's national security interests.' The committee had studied all gamuts of the issue, looked at the historical precedents and all available evidence before coming to that conclusion. When the report was presented to the cabinet committee on security under the National Democratic Alliance regime, it was asked to once again review it.

Another year-long study, however, once again reiterated its findings and told the government in end-2004, now led by Prime Minister Manmohan Singh, that all efforts should be made to send the Karmapa back since he had definite links with the Chinese establishment.

The government, however, sat on the report. But in 2009, the National Security Council Secretariat decided to undertake a separate study on the Karmapa under the then deputy NSA, Leela Ponnapa. After an eight-month effort, the NSCS said: 'His presence is not in India's national interest and the Karmapa has to be viewed as a pro-China asset bent on promoting China's interests...'

Given overwhelming evidence against the Karmapa, the then External Affairs Minister Pranab Mukherjee convened a review meeting on the Karmapa case. The meeting found that all efforts to win the Karmapa over between 2001 and 2008 (for instance, by giving him Z plus category security, meeting all his expenditure and allowing him to expand his monastery) had failed and therefore his activities needed to be curbed.

And, yet, the UPA government decided to do nothing on the Karmapa until the recent controversy. Sources in the security establishment point out that there is no truth in the argument put forward by Karmapa apologists that all his monetary transactions are handled by his devotees and officials and he has no role to play in the day to day administration of the Kargyu sect that he heads.

Sources say Karmapa Ugyen Trinley Dorjee's own affidavit to the Supreme Court in 2003, taking responsibility for all the activities of Tsurphu Labarang (a form of Tibetan administration) under which this sect functions is "deemed to have been done by me", gives a lie to the claim that the Karmapa is a simple, religious leader who does not know what his followers do with the donations and money coming to him. 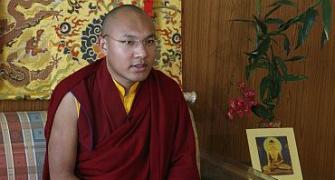 'India is Karmapa's second home, he is happy here'