Bihar polls: How will the Muslims vote?

By Mohammad Sajjad
October 25, 2010 19:55 IST
Dr Mohammad Sajjad, assistant professor at the Aligarh Muslim University, conducts a status check of politics in contemporary Bihar, which will have its third round of polls on Thursday.

Even as the people of Bihar vote in the assembly election, the question is how the Muslims will vote.

The community constitutes about 16.5 percent of the total electorate. Bihar Chief Minister Nitish Kumar, aware of this figure, has been vocal in his opposition to Gujarat Chief Minister Narendra Modi campaigning in the state.

For all its backward mien, Bihar has a very high political consciousness and a reason for the paradox is politics is the sole arbiter of fate in this state. And Muslims are no exception.

During the 15 years (1990 to 2005) rule of Rashtriya Janata Dal leader Lalu Yadav and his wife Rabri Devi, the Muslims in Bihar were unflinchingly loyal to Lalu.

But in July 1994, Syed Shahabuddin, the diplomat turned politician, exploded this myth.

Shahabuddin catalogued a long list of grievances, supported by statistics and facts, in his English monthly Muslim India, and lambasted Lalu for treating Muslims like 'political hostages' who 'must accept humiliation and terror'.

He said there 'never has been a discussion in the assembly on the conditions of the religious minorities of Bihar' and 'no separate budgetary allocation' for the 'much trumpeted Department of Minorities Welfare'.

Shahabuddin added that the State Minorities Commission had never been given any functions and followed it up with figures -- just 2 percent Muslims were recruited as constables. He added that the commission of inquiry into the Bhagalpur riots of 1989 had been shut down.

As for the backward classes, Shahabuddin said the Bhatiyas had not been included in the list of backward castes and in fact, Lalu had reduced the budget for the Minorities Finance and Development Corporation from Rs 30 lakh (Rs 3 million) to Rs 5 lakh (Rs 500,000).

Finally, the budget for minorities was scrapped altogether. According to Shahabuddin, no loans had been granted to Muslim youth, the posts of Urdu teachers, translators, typists sanctioned over a decade ago, were also not filled in.

'For Lalu Yadav, who swears by the Mandal Commission -- social justice means the substitution of Bhumihar-Rajput Raj by Yadav Raj. Moreover, college teachers from the minority community were deprived of pension and gratuity available to their counterparts and the government did not even pay the basic salary component,' he wrote.

Dr Jagannath Mishra became popular among Muslims, ever since he legislated the Bihar Official Language Act 1980, granting Urdu as the second official language of Bihar. The Act opened up avenues for employment in government offices and schools.

Dr Mishra was brought back as Congress chief minister after the Bhagalpur riots of 1989, to assuage the aggrieved Muslim electorate.

The Mishra-led cabinet took favourable decisions, while going to the assembly polls in 1990, but Lalu undid all of them, immediately after coming to power in the same year.

The rioters of Riga and Sitamarhi in October 1992 were never tried, and in July 1996, Muslim Pasmanda Dalits were raped and killed at Baithani Tola (Bhojpur). The aggressors were never tried.

Yet, all these grievances remained largely unarticulated by most leaders -- the Muslim electorate was more concerned with keeping the Bharatiya Janata Party out of power and Lalu appeared to be the only political force, who could keep the BJP at bay.

Lalu also popularised the electoral alliance of Muslims and Yadavs as an invincible equation.

The Muslims who mattered

Meanwhile, some events unfolded which had far reaching implications. In 1992, the All India Milli Council was formed by the Deoband Ulema in which the Bihari Muslim clergy played an important role.

Maulana Asrarul Haque Qasmi, one of the important leaders contested elections, but lost.

In the 2009 Lok Sabha election, he won from Kishanganj, as a Congress candidate. In 1993, Dr Ejaz Ali formed the All India Backward Muslim Morcha and later merged with the Deoband clergy group to rename it as the All India United Muslim Morcha, and included Arzal Muslims in the scheduled caste list.

Besides a few provincial legislators and ministers, some big assignments (like chairman of the University Service Commission, Minorities Commission, education councils etc), were given to the Ashrafs, who constitute 35 percent of Bihar's Muslims.

Nitish Kumar, the man who waited and watched

All the while, Nitish Kumar kept a close watch on developments. He enlisted the support of the emerging leaders of non-Ashraf Muslims, a section of which voted for him in 2005.

Nitish then sent the two leaders to the Rajya Sabha. In 2009, on the eve of the Lok Sabha election, these leaders mobilised people on the National Commission for Religious and Linguistic Minorities (the Rangnath Mishra Commission), which recommended reservations for all Muslims.

This posed a threat to the benefits augured by the Pasmanda-Dalits (Ajlaf and Arzal) castes of Muslims. These leaders called both Lalu and Nitish to oppose it -- Lalu 'treaded cautiously and was circumspect', while Nitish was 'forthright in committing to stand by them'. This stand yielded Nitish electoral dividends.

In fact, being in alliance with the BJP meant the Muslim votes were a bonus to Nitish.

The most popular step Nitish took was reserving seats for lower backward castes in the rural and urban local body elections (Panchayati Raj Institutions) of 2006, which spent huge amounts on the social sector and infrastructure development.

As many as 27 castes of Muslims (Ajlaf and Arzal) fall in the category of lower backward (which is known as Annexure-I, since 1978, when Karpoori Thakur was the socialist, non-Congress chief minister of Bihar. And the reservation benefit was only confined to provincial government jobs).

The Congress steps in

Does this mean Muslim votes will remain divided along the coalitions led by Nitish and Lalu?

No. The Congress is also trying to woo Muslims. It hopes that Nitish's alliance with the BJP will negatively impact Muslims as many are disenchanted with Lalu.

The Congress, therefore, will be the obvious choice of a considerable proportion of the Muslim electorate.

The Congress has therefore made Mahboob Ali Qaiser president of the Bihar unit of the Congress. It also hopes that its MP from Kishanganj, a Deoband Maulana, Asrarul Haque Qasmi, will help attract enough Muslim votes for the Congress.

While Qaiser has been consistently with the Congress for two generations, he belongs to a landed feudal family of Simri Bakhteyarpur (Saharsa in eastern Bihar).

Till the early 1980s, since India's Independence, Congress leaders with feudal backgrounds in Bihar and elsewhere, founded schools and colleges, recruited their caste fellows in these educational institutions and had them taken over by the provincial government.

Through such exercises, a brilliant practice of patronage was perfected, with these employees acting as vote mobilisers and booth managers (an euphemism for poll rigging).

But Muslim Congressmen like the Raja of Parsauni (Sitamarhi-Muzaffarpur in north Bihar) and Qaiser's family of Saharsa did not do so. Now, the growing Muslim middle-class backed by a remittance economy from the Gulf, have a greater urge for modern education, and lament such leaders for failing to establish educational institutions.

The Article also says the State would not discriminate in sanctioning grants to such institutions.

In the face of such voices, Maulana Asrarul Haque Qasmi said the Aligarh Muslim University would open its off-campus university in Kishanganj and the Congress-led government at the Centre would make budgetary allocation for it.

Nitish Kumar has also been saying that his government has provided the required land.

The BJP's Akhil Bharatiya Vidya Parishad is opposing it tooth and nail and has taken to the streets insisting that Nitish give the land to the AMU. It could therefore have benefited Nitish in terms of Muslim votes.

But there are some disconcerting questions. On the one hand, the AMU Act 1981, section 12 (2), does not permit it to go beyond 25 km of its present campus in Aligarh, UP, and therefore AMU alumni has opposed the decision.

Moreover, the AMU, unlike other universities, neither offers reservations for Muslims nor for OBCs. So, the moot question is, how will this venture help Muslims?

They are also raising questions against former RJD MP M A A Fatmi, who as the Union minister of state for human resource development during 2004-2009, did not bother to recruit Urdu teachers or introduce Urdu literature in various Kendriya Vidayalayas and Navodaya Vidyalayas in Urdu-speaking areas.

The long spell of the Congress rule and then the Lalu-Rabri Raj in Bihar is alleged to have overtly or covertly allowed and perpetuated the loot of Waqf properties like those of the Soghra Waqf Estate in Nalanda and the Tasawwur Ali Waqf Estate in Muzaffarpur.

Nitish has entered into another innovative 'social engineering'. Muslims are not only divided along caste lines, they are divided along sub-sectarian lines also.

The Barelvi-Deobandi divide among the Sunni Muslims, sharply polarised, is being wooed by Nitish by showing favourable overtures to the Idara-e-Sharia.

The Sharia is an an institution of Barelvi Muslims in Patna to guide them on personal laws.

One of the strongest indictments against Nitish is that his government has neglected the sanctioned posts of teachers in schools, colleges and universities.

Lalu supporters have been saying that the RJD rule recruited lecturers in 1996 and 2003. They also say that in 1996, out of 1,400 vacancies, more than 300 lecturers recruited, were Muslims because Chairman Professor Wahab Ashrafi did not let anti-Muslim prejudice prevail.

But Ashrafi's recently published Urdu autobiography, Qissa Be Samt Ziondagi Ka (Story of a Disoriented Life), says something else.

Ashrafi had to serve a prison term on charges of indulging in irregularities related to those recruitments. He complained against Lalu saying he conspired against him and became vindictive as Ashrafi had resisted anti-Muslim discrimination.

The Congress is trying to attribute it to then chancellor A R Kidwai.

Development takes a back seat

While the eastern part of the state has the largest concentration of Muslims, it suffers from recurrent floods, mostly by ferocious rivers like the Baghmati and the Kosi.

The Congress, in its five-year plans, neglected agriculture and did not pay serious attention to flood problems, reducing the state to an 'internal colony', supplying cheap labour to the developed and developing parts of India.

The principle of balanced regional development became the obvious casualty. With rising consciousness due to education and migration, the people of Bihar resent this, holding the Congress responsible.

Lalu's politics always disregarded the issue of development and those concerning the middle class.

Nitish is also indicted for having neglected the dilapidated embankment of the river Kosi, which resulted in terrible floods two years ago. The Nitish government was also found wanting in relief measures. Yet, people have hope that Nitish will pay attention to such issues.

And that is probably the reason behind Nitish's 'anger' against Modi. In fact, it is this 'social engineering', and 'inclusive development' that seems to be the strongest planks for Nitish to clamber on to in the assembly election campaign. 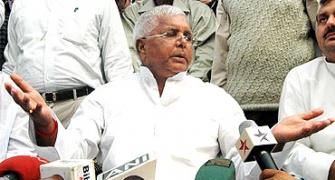 Ahead of big match, Lalu pads up cricketer-son