Why Modi is pleased with Vajpayee's attack 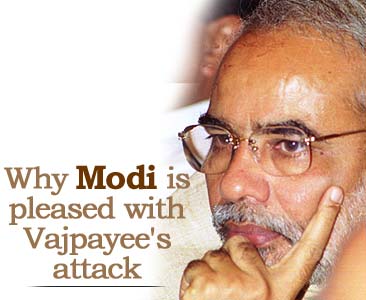 Fact #1: Believe it or not, Chief Minister Narendra Modi felt relieved on June 13 when he saw former prime minister Atal Bihari Vajpayee on Zee News creating a controversy while giving an interview from his retreat in Manali.

Vajpayee said the Gujarat riots could have been one of the reasons for the Bharatiya Janata Party's defeat in the Lok Sabha election. He also confirmed that he personally favoured Modi's removal, but was persuaded otherwise by the hawks in the Sangh Parivar.

Creating a vertical divide in the Sangh Parivar, Vajpayee said Modi's removal as Gujarat chief minister would be discussed at the Bharatiya Janata Party national executive meeting to be held in Mumbai from June 22 to 24.

If anything, Vajpayee's remarks have reduced the pressure on Modi. "The anti-Modi campaign was on and we were sure of success," said a former BJP minister in Gujarat. "Now, the issue has got diverted. Vajpayee has made our task difficult."

The dissident camp in Gujarat does not agree with Vajpayee's contention that the BJP lost the Lok Sabha election because of 'Gujarat.' Many BJP leaders claim that Vajpayee is trying to re-establish his position in the party at Gujarat's cost.

"There was no way Modi could have withstood the pressure from the cadre, which is feeling disillusioned," said one BJP politician who is an aspirant for Modi's chair. "He is opposed by half the party MLAs and ministers. But Vajpayeeji's wrong timing to air his flawed analysis has helped Modi."

This politician, who refused to be named, said, "In my state you can't remove any chief minister by blaming him for riots! Let me tell you, these days even the Congress can't do it. Vajpayeeji has made a political blunder to clear his record."

The fact is the BJP is unable to diagnose its illness. Vajpayee's confusion is a glaring example. Another BJP politician argued that in Tamil Nadu and Andhra Pradesh, Gujarat was never an issue. Even in Gujarat, he claimed, the Congress won 12 Lok Sabha seats only because it scrupulously avoided the riots issue.

Modi, whose ego was bruised by the BJP's performance in the general election, has got a lifeline now, the Gujarat BJP leader complained. No one is crying over Modi's botched up tenure. His leaving the scene will not be an issue, but the how and why are crucial. BJP leaders in Delhi and the state are worried about the message that will go to the cadre if Modi is removed. If he is sacked in the future because he could not stop anti-Muslim riots, then even his staunch opponents in the party will not be able to rejoice.

"We won the assembly election because of the Gujarat issue!" the second politician said. "Now how can Vajpayee ask him to go citing the same issue?"

Fact #2: Before Vajpayee made his heartburn public, there was a demand in the party to make Modi accountable for its poor performance in the election. Keshubhai Patel, former chief minister, was removed with indecent haste in October 2001 because the BJP had lost a by-election in Sabarmati, an assembly constituency in Ahmedabad, the heart of the BJP's bastion in the state and a segment of L K Advani's Lok Sabha constituency.

Under Modi's leadership, the BJP won only 14 of the 26 Lok Sabha seats from the state this election. So local politicians are asking why Modi should not be removed. After all, they say, the BJP lost its status of single largest party in the Lok Sabha to the Congress by a mere seven seats, and Modi lost six 'certain' seats.

Fact #3: Modi is getting unpopular in the party because of his behaviour, a former Union Cabinet minister claimed. Meet ministers, MLAs, and party politicians from Gujarat in private and they all have stories to tell about Modi's haughty behaviour. Because of his Z-category security, he has also become inaccessible. The extraordinary security cover gives him a handle to play hide and seek with party leaders.

"He suffers from a superiority complex," said a state BJP leader who knows Modi personally. "He is a die-hard believer in himself."

Before Vajpayee threw a spanner in the works, the anti-Modi camp wanted the chief minister out for four reasons.

First, as long as he remains in power, the issue of the Gujarat riots will remain. Many BJP leaders have veered around to the view that the issue has damaged the state's image considerably. Gujarat has become synonymous with 'anti-Muslim.' If Modi goes, the issue will lose political relevance.

Second, Modi is arrogant in his behaviour with his Cabinet colleagues, MLAs, and the media. He is ever ready to put them down.

Third, he promotes only himself. Party colleagues allege he is a narcissist. State-level party propaganda material invariably carries his picture. Even the Republic Day was celebrated "with Narendra Modi." All state transport buses have his picture on the rear. In all announcements of the government and the party, Modi comes first, then the event. He skilfully crafts his image for public consumption and spends a lot of time managing it.

Last -- and the most crucial reason for the divide in the BJP -- is the Modi's administration's economic policies. His liberalisation and economic thought are not in sync with the Rashtriya Swayamsevak Sangh, the parent organisation. Of course, here too he behaves like a one-man army and not a team leader. He hates taking people into confidence, said a confidant of former chief minister Keshubhai Patel.

Modi wanted the state's coffers to be filled by checking the leaks in the system. Not only has that displeased vested interests, but also poor farmers who are habituated to stealing electricity.

One of the main reasons for the BJP's bad showing in the Lok Sabha election was Modi's anti-farmer image. He got a bad name because he zealously ran a huge and successful campaign against people who have been stealing electricity for decades.

A former BJP Lok Sabha member remarked, "Forget [Chandrababu] Naidu or [S M] Krishna, Modi can put even Manmohan Singh to shame in the implementation of a market economy."

Most of the RSS leaders in Gujarat, surprisingly, are from Maharashtra. Two decades ago, when Modi was a mere pracharak (preacher) in the RSS, he was different from them. He used to like variety in things he used, like sandals, watches, and pens. But the conservative Maharashtrian RSS leaders did not approve of it. Their bias against Modi has grown manifold since.

So when Modi launched a campaign against electricity thefts and raised tariffs, RSS leaders took the lead in opposing him. One of them even went on a fast. The mass agitation threatened his position, but he did not budge, giving just a marginal reprieve in the tariffs.

Naturally, the RSS conservatives are opposing Modi. They find an eerie resemblance in his style of administration to that of the late Sanjay Gandhi, and they believe his thinking is no different from the market-savvy Chandrababu Naidu. They find it a dangerous combination.

Fact #4: A well-wisher of the chief minister in the BJP has a point of view. Before the party sacks him, the leaders will have to decide which way the BJP should go next. After the defeat, how is the party going to rejuvenate itself? What will be its next mantra? If, he argued, the BJP decides to underplay its core value of 'cultural nationalism', only then can Modi be dumped.