Ever since Mekhail had first entered the courtroom, he had, it would seem, never once looked at his mother, though they were a few metres away from each other.
Curiosity, residual regard, memories, anger, none of it, could make him even look at the woman who gave birth to him.
Was his hatred so overpowering?
Vaihayasi Pande Daniel reports from the Sheena Bora murder trial.
Illustration: Dominic Xavier/Rediff.com 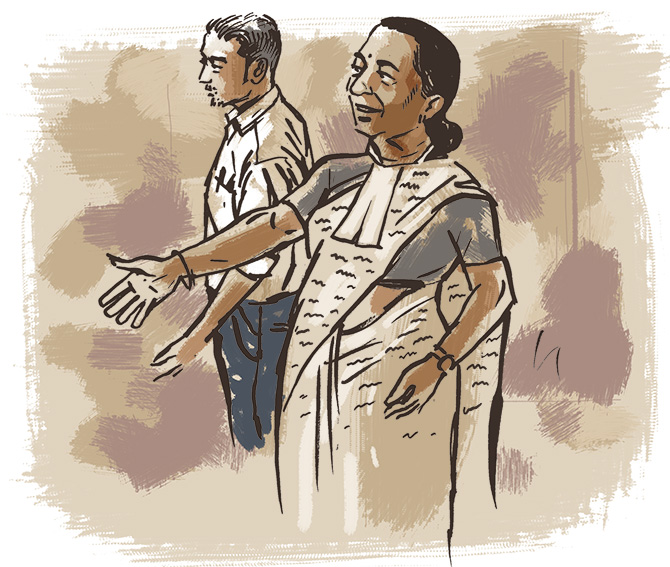 How powerful can human hatred be?

Does time sometimes lack the authority to lessen it?

Could the belief that Time heals all wounds be a bunch of twaddle.

Maybe Hate truly is the most dominant of man's range of emotions, its powers outstripping any of the clout love mawkishly claims to flaunt.

When you forgive you in no way change the past, it is said, but forgiveness is supposed to be still always possible and the way forward.

A trip to court on Thursday, July 26, altered some of these long-held notions.

Every trip to court is a lesson on life -- specifically about its mystifying greys, that are so much more essential than the vapid blacks and whites -- one has discovered.

The lawyers and Prosecution Witness No 15 Mekhail Bora, Indrani Mukerjea's son from her first relationship, were there. CBI Special Public Prosecutor Bharat Badami had already shown up.

So were the accused, well in time, from the Arthur Road and Byculla jails, central Mumbai.

Accused No 2 Sanjeev Khanna, a Kolkata businessman and Indrani's former husband and father of her teenager daughter Vidhie Mukerjea, was in a jaunty black and red checked shirt and black jeans.

Indrani looked especially feminine and young, nothing close to her 48 years, in a pale green floral kurta outfit and a light green bindi.

It was CBI Special Public Prosecutor Kavita Patil who was delayed.

She was finishing up a 2011 corruption case, two doors down, in Judge M G Deshpande's Courtroom 52 against a commissioner of income tax (appeals) who had been caught allegedly demanding a bribe of Rs 25 lakhs.

When she bustled in about 15 or 20 minutes later, wearing a sophisticated cream silk sari with a black and grey pattern, Patil was happy. She had just won a four-year sentence of rigorous imprisonment and a Rs 25,000 fine for the IT officer and it was an important victory for her.

Unlike the American thrillers you have read, where the district attorneys are the big stars in court, in India it is skewed oddly the other way. The money and fame goes to the muscular defence lawyers.

A triumph by a government public prosecutor is rather hard won, since s/he is pitted against the power of batteries of well-paid defence advocates and Patil is one of the few or perhaps only woman CBI prosecutors in this court.

Mekhail, 28, took the stand, wearing a white shirt and dark trousers, a pen poking out of his left shirt pocket. He was calm and composed, fully recovered from Wednesday's meltdown, even if the scars on his heart may never be obliterated.

He said he had been called to the CBI office in Mumbai at the end of October in 2015 to give his statement in the murder investigation.

At the CBI office they had asked to look at his cellphone.

"Mere cellphone mein woh e-mails the Indrani (Mukerjea), Peter (Mukerjea, his stepfather) and Sheena. USB mein laga ke computer par lagaya. (On my cellphone were those e-mails between Indrani, Peter and Sheena. Using a USB cord they downloaded them to a computer)."

His cellphone offered access to some of the e-mails that had circulated between his elder sister, their mother and Peter, because Sheena had probably forwarded them to him, since she told him about the non-stop troubles and squabbles she was having with her mother and stepfather.

In 2012, in the months before she was killed, Mekhail had said in his revealing testimony on Tuesday to the court, that Sheena had been fighting battles with them over her relationship with Rahul Mukerjea, Peter's son from his first marriage.

Indrani and Peter did not approve of her dating and living with him in a small flat in Marol, north west Mumbai, probably because they felt she and Rahul were too young and not yet established in their careers.

It is not clear what Rahul was doing at the time. But Sheena was working at Mumbai Metro One, a job Indrani had helped her get.

What was unsaid was that though Indrani and Peter disapproved, they appeared to be still supporting both Rahul and Sheena at the time, and in testimonies of other days or other witnesses it had already emerged that Sheena had been given a car and a television had been sent to their rented home.

Patil: "Kitne SIM the aapke paas? (How many SIMs did you have?)""

Patil: "Number yaad hai? (Do you remember the numbers?)"

He said he knew the last few digits. "Mobile toh nahin hai mere paas (I don't have the mobile with me)."

Patil asked about the e-mail and SMS record: "Dekhoge toh pahchanoge? (If you see it, will you remember it?)"

The court clerks pulled out an orange file that Patil said contained 42 pages of e-mails and SMSes.

Gunjan Mangla, Indrani's lawyer got up to object.

"My lord, there is no mention of the e-mails (on the record). These printouts were taken from what source? It only talks about SMS."

Judge Jagdale immediately tetchily told her: "You can raise that point later."

Mangla persisted, even in the face of the judge's irritation: "They say printouts, but where are they taken from?"

It was a valid point because -mails can be easily conjured, as has been discovered in an earlier testimony.

Anoop Pandey, Peter's lawyer, added his weight behind Mangla'S objection. He has a louder voice and the judge took more notice of the issue brought up when Pandey raised his volume.

The judge, after considering Pandey's take, finally impatiently told Mangla: "Your objection to the document cannot be decided now. Cannot decide if it is a piece of evidence now and it be rejected. It is premature."

Mangla, not to be defeated: "The document has not been received from proper custody."

Patil then asked if Mekhail remembered Sanjeev Khanna from the two not very happy meetings he had with him, the last in 2012.

Mekhail had met Sanjeev at Indrani's INX office after which he took him to an unnamed Mumbai disco and then later they met in 2012 at Marlow, the Mukerjeas' flat in Worli, south central Mumbai on the night of Sheena's murder.

It is unlikely that Mekhail could have forgotten him.

Patil: "Yeh sab ko pahchanoge? (Will you recognise all of them?)"

Without actually looking at the accused box, his eyes firmly averted, his face had a blank or maybe slightly distasteful expression pasted on it, he identified: "Sanjeev Khanna, Peter and Indrani."

That moment said a lot. Volumes.

It was the most significant and insightful few seconds of the hearing.

Ever since Mekhail had first entered this courtroom on Monday, he had, it would seem, never once looked at his mother. Never actually seen her though they were a few metres away from each other, sharing breathing space.

Curiosity, residual regard, memories, anger, none of it, could make him even look at the woman who gave birth to him when she was probably 19, 28 years ago.

Was his hatred so overpowering?

It seems there are no mixed emotions for Mekhail perhaps because, Indrani, he believed had taken away his closest relative, his Didi.

Mothers, even if they are mothers, are not always forgiven.

Mangla told the judge that she would set the cross-examination ball rolling with just one question and, with special emphasis, very formally addressed her client's son: "Mr Mekhail Bora, when did you receive summons to appear in this court?"

Switching to Hindi she added, "Kab mila is court mein aane ke liye? (When did you receive the summons to appear in this court?)"

It seemed clear why Gunjan chose to ask this question even as the next questions there on would be asked by Indrani's trial lawyer, the tough Sudeep Ratnamberdutt Pasbola, who handles the most tricky examinations.

The defence and the prosecution have been in a continuous disagreement over the time given for them to prepare for the cross examination of Mekhail.

It would seem possibly that Mekhail knew earlier than the defence when he was expected in court.

Badami was trying to sort out Mekhail's scheduling issues given he needed leave from a new job and the judge said he needed a day off too.

Kaushal Kishore Singh, the CBI investigating officer, always an enigmatic look on his face, said solemnly: "I already gave him his fare."

Badami joked; "By 'I' he means the CBI!" A round of laughter.

The judge also offered with a smile that the court would pay expenses up to August 1 and if the defence causes any delays after that it would be on their dime.

Anoop Pandey said he needed to put in an application for his client about a food request and passport renewal. Apparently, Peter needed to renew his passport.

These were papers that had been drawn up towards Peter and Indrani's divorce filing.

After Indrani left, Judge Jagdale curiously asked Dey what the status of that case was and wondered how continuous changes could be made once it had been filed. He said he only asked because he saw the number of trips Dey made to court to meet Indrani.

Dey clarified that it had not been filed yet and something about the division of assets, if one heard right. She added that before they filed it they would take permission from him too. And then Indrani and Peter would have to undergo counselling.

Judge Jagdale, his eyes widening comically: "Counselling? At their age?! No!"

There was plenty of laughter this time, while Dey explained it was a court-directed formality. 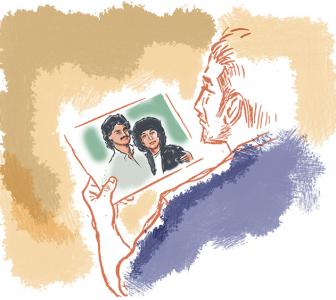 Sheena Bora Trial: The Mother Who'd Never Been A Mother 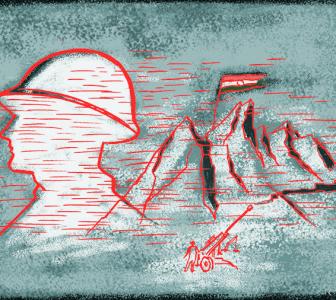 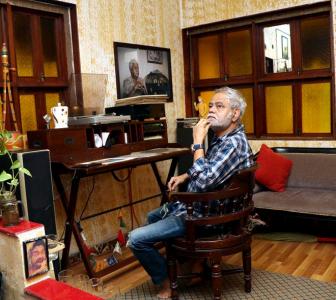 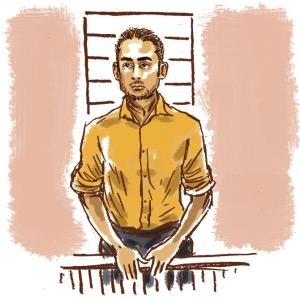 Sheena Bora Trial: Like Indrani, Mekhail is a fighter