News
Business
Movies
Sports
Cricket
Get Ahead
Money Tips
Shopping
Sign in  |  Create a Rediffmail account
Rediff.com  » News » Rahul: The man who does not want to be a politician

On such a historic day in the 127-year-old Congress party's history, Rahul Gandhi presented himself as a dreamy-eyed idealist who is trying to be a visionary instead of an Indian leader keen to be a man of steel to take on the hard realities of India.

Rahul Gandhi, delivering his first speech as Congress vice-president, struck an emotional chord with party leaders present at the Chintan Shivir in Jaipur on Sunday.

Being nominated to the post by the virtue of his family's position in the Congress party, Rahul won hearts when he declared, "The people of India are now my life."

It is a pledge one can never make unless one believes in it.

On such a historic day in the 127-year-old Congress party's history, Rahul Gandhi presented himself as a dreamy-eyed idealist who is trying to be a visionary instead of an Indian leader keen to be a man of steel to take on the hard realities of India.

Through his speech, Rahul was supposed to ensure that his family's loyalists, his to-be-followers, his party cadres and senior Congress leaders accept him as their leader, not because he is a Gandhi-Nehru, but because of what he stands for and on the basis of his understanding of what the Congress leadership means to him.

Rahul was quite successful in touching the hearts of his party leaders; he moved senior party leaders by his speech, which had elements of surprise.

His speech received a standing ovation not just from party leaders present at the Chintan Shivir in Jaipur, but also from Prime Minister Manmohan Singh and his mother, Congress President Sonia Gandhi.

Rahul Gandhi on Sunday was very different from what one saw during the election campaign in Uttar Pradesh last year. Then, he appeared brash, angry, stubborn and autocratic.

On Sunday, he presented a new side of a man who does not want to be a politician, but a statesman. He tried to be humble, soft and a bit dramatic. He was emotionally charged and took the audience along with him when he revealed how Sonia Gandhi came to his room on Saturday night and wept.

"Last night everyone congratulated me," Rahul said. "But last night, my mother came to my room. She sat with me and she cried. She cried because she can see that power can be a poison. And she can see it because she is not attached to it. Don't chase power for the attributes of power, but use it to empower the world."

"It is my mother's lifetime experience and my experience in eight years. We must not forget the negative aspects of power," he said.

Rahul went down memory lane as he spoke about his grandmother Indira Gandhi's assassination in October 1984. "I saw my father (Rajiv Gandhi) crying for the first time, but on the same day I saw him address the nation. There I saw a gleam of hope," he recalled.

"The Congress is made out of the DNA of Hindustan. The leaders of the Opposition don't understand it."

Rahul spoke against rebels standing in elections; he spoke against non-Congressmen who are given party tickets on eve of elections. He spoke about discipline and the rules to be followed by the party.

No longer, he said, would he look after only youth affairs, but also look at all other sections and other issues faced by the party.

He spoke against party managers in New Delhi who give election tickets without informing bloc and district-level party leaders. "Why do a handful of people control the entire political stage?" he asked. 'Why are decisions only made in New Delhi?"

"In the Congress if you don't have a position, you mean nothing," he said.

Rahul Gandhi promised to change the Congress party. But for that, one will have to wait and watch. For now, the Gandhi family and its loyalists can relax as the magic of the sound bytes worked among a large number of Congressmen and how!

Rahul's speech was more in the mould of his father Rajiv Gandhi's December 27, 1985 speech. But it fell short of that impressive speech 27 years ago because the emotional quotient was a bit too high and the ground realities facing the Congress a bit too harsh and brutal.

That was the mismatch too visible to ignore.

Rahul gave hope that the Congress organisation will improve. He promised that he would take India forward with a vision of inclusive growth.

Through a sensitively delivered speech, Rahul Gandhi, for a little while at least, took his party men to the land of hope and dreams. 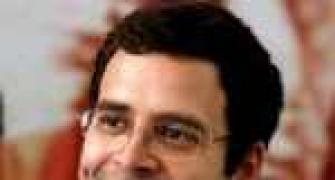