Why Indians are angry with Obama's stand on Pakistan

By Krishnakumar P
November 08, 2010 11:12 IST
Why do Indians get so angry with the US stand on Pakistan, as emphasised in the reactions to President Obama's comments in Mumbai this past weekend?

Consider this: Last month the United States announced it would give more than $2 billion in military aid to Pakistan.

This is the first time the US has made a multi-year commitment of military education and training.

Pakistani newspapers added that 'a better understanding of Pakistan's defence needs' may lead to a further $400 million in military assistance.

Three months ago, US Secretary of State Hillary Clinton announced a new fund for Pakistan's flood victims and contributed $150 million towards flood relief.

While no one could have quibbled over the humanitarian aid being extended to Pakistan in its hour of need, the US has otherwise been very magnanimous to Pakistan -- earlier this year, Clinton announced $7.5 billion in aid.

Krishnakumar Padmanabhan lists previous instances of American generosity to its ally in the War on Terror.

Assistance to Pakistan has always been tied to America's security and strategic goals.

Over the decades, US has pumped in close to $26 billion into Pakistan, an amount that would ordinarily turn the recipient into a paragon of prosperity.

Here's a look at what happened to most of those billions of dollars.

Starting with 1950, when the Cold War was warming up, the US provided about $3.2 billion to Pakistan, $2.5 billion of which was in economic aid. But after 1965, on the back of India-Pakistan hostilities, the US checked its aid inflow.

1979 changed everything between the two countries, when after discovering a clandestine uranium enrichment facility in Pakistan the Jimmy Carter administration shut off the tap.

In fact, when Carter sanctioned a paltry $400 million that combined both economic and military aid, then Pakistan president General Zia-ul Haq turned down the 'peanuts', a double whammy since Carter had been a millionaire peanut farmer before turning to politics.

With ties between the US and Pakistan strained over aid, an external factor acted as a catalyst that would bring it back on track.

This was also the period when the Inter Services Intelligence became the primary inlet through which aid was poured into Pakistan. The main focus of US aid to Pakistan was to support covert military assistance to the Afghan mujahideen.

In the decade from 1980 to 1990, the US ramped up military and developmental aid to a massive $5.5 billion. This was also the time when the US turned a blind eye to the export of jihadis -- the target, after all, was the bastion of Communism, the Soviet Union.

After the Afghan war, despite Pakistan fulfilling the US's strategic aims, there always was the shadow cast by Islamabad wanting to go nuclear.

With the Soviet Union also having imploded, the US did not see much reason in pumping billions of dollars into Pakistan.

Using Pakistan's nuclear ambitions as a pretext, President George H W Bush cut aid flow back to the meagre millions it was. In these 10 years, the US sent only about $435 million in aid, of which a paltry $5.2 million was marked for military assistance.

As with the previous instance when the aid flow had dried up, this time, too, an external act gave the impetus to the ties between the two countries.

When planes flown by jihadis crashed into the World Trade Centre and elsewhere in America, Pakistan's geography once again scored over history as the US entered Afghanistan.

Washington increased its aid to about $9 billion solely for Pakistan to beef up its military and for operations along its border with Afghanistan. The US gave another $3.6 million for economic and developmental efforts in the troubled region.

This period is also when concerns about how the money is spent started growing, especially as unrest festered unabated on Pakistan's western borders.

But as a new administration under Barack Obama came in, its policy on Afghanistan also underwent a change. Obama has sanctioned another $7.5 billion in aid for Pakistan over this five-year period.

Unlike the George W Bush administration, he put checks and balances in place -- at least on paper -- to ensure that the money was properly spent. It also comes with explicit instructions that the money should not be used to fund militants or attacks on neighbouring countries (read India).

A clause also said the US can stop aid if it unearths any discrepancy in the disbursement of aid.

It is as part of this decision that Hillary Clinton unveiled the latest installment of US aid during a recent visit to Pakistan. The latest largesse also emphasises the developmental part and less the military part. How Pakistan utilises it is another question.

Where the money has actually gone

While it is difficult to say how Pakistan spent the money in the early years, studies have clearly documented what Pakistan has done with the aid since the beginning of the millennium. And there are no surprises there.

Studies revealed that while 96 percent of all aid in the first decade of the 2000s have gone into military operations in the federally administered areas, only 1 percent has gone into developmental work.

In fact, only two per cent of all American developmental aid has gone into education.

So where has the money disappeared?

Two places. The first is to buy peace. Instead of launching military operations against militants in the restive Federally Administered Tribal Areas, Pakistan has simply been buying out the militants. But experts say in a region where allegiance is constantly shifting, this doesn't amount to much.

The second is in militarising its border with India. Though India has always maintained that most of the money the US sends to Pakistan is used to bolster Pakistan's defences along the Indian border, this belief got conclusive proof when former Pakistan president General Pervez Musharraf admitted that Islamabad has indeed been using aid money from the US on its eastern border.

Will the flood relief fall into the hands of the terrorists?

The Pakistan government has dismissed such concern, but it remains to be seen if it will walk the talk on this.

ALSO READ: 'Despite US funds, things have got worse in Pakistan'
'The US has not shut terror havens in Pakistan'
US Senator backs India's fear on Pak aid 'misuse'
Obama's controversial Pakistan remarks 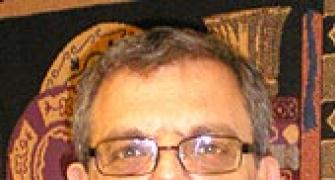 'Despite US funds, things have got worse in Pakistan' 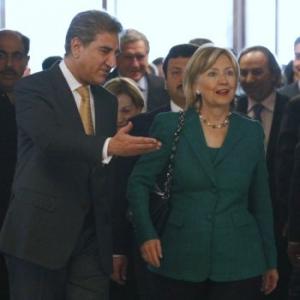