News
Business
Movies
Sports
Cricket
Get Ahead
Money Tips
Shopping
Sign in  |  Create a Rediffmail account
Rediff.com  » News » 'They were determined to strangle Pakistan at birth'

'Patel was more in tune with the popular mood than Jawaharlal Nehru. While the principle that Hindus and Muslims should be able to live together remained central to Nehru's vision for India, the Sardar was less sentimental.'

'Nehru would angrily face down mobs himself, rushing from trouble spot to trouble spot. A veritable tent city, filled with Muslim refugees, sprouted on the lawns of his bungalow... Mountbatten feared Nehru's impulsiveness would get him killed, and assigned soldiers to watch over him.'

Nisid Hajari's Midnight's Furies: The Deadly Legacy of India's Partition -- which won the 2016 William E Colby Award, January 27 -- casts fresh light on the events and personalities behind the horrific division of the subcontinent which haunts India and Pakistan to this day.

Upon the Partition of the former British Indian empire in August 1947, terrible sectarian massacres swept across the divided Punjab province. As millions fled in both directions across the new border seeking safety, the Indian capital of Delhi swelled with tens of thousands of angry and traumatised Hindu and Sikh refugees. The riots spread to Delhi in early September, paralysing the government for several days and raising real fears that both India and Pakistan were devolving into chaos:

Initially none of the Indian leaders doubted that Sikhs, who had played a central role in the Punjab violence, had spearheaded the Delhi attacks, too. Over 200,000 non-Muslim refugees from the Punjab had squeezed into the capital, and plenty of them thirsted for revenge.

Home Minister Sardar Vallabhbhai Patel called in local Sikh leaders and threatened to toss their followers into concentration camps if the violence did not cease. He also gave the Army a 'free hand' to go after Sikh troublemakers. Commanders ordered their troops to shoot rioters on sight. Though the military could not admit openly to targeting any particular community, Governor-General Lord Louis Mountbatten joked grimly, 'The object would have been achieved if in 48 hours' time the local graves and concentration camps were occupied more fully by men with long beards than those without.' 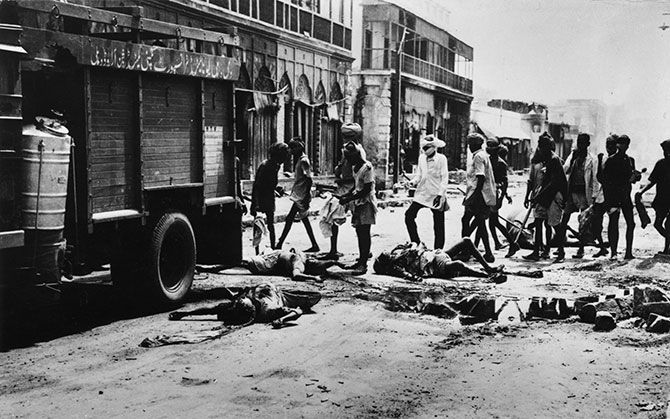 IMAGE: Victims of the Partition riots in Delhi are taken away. Photograph: Keystone/Getty Images

Very quickly, however, Patel's assessment of the threat changed. The problem was not just the Sikhs. Earlier police reports had also warned of a brewing Muslim uprising in the capital. Most of the city's ammunition dealers were Muslim, as were most of its blacksmiths. The latter had supposedly converted their workshops to churn out bombs, mortars and bullets. Patel had been worried enough about the threat to issue licenses to several new Hindu arms dealers in Delhi. He had 'been giving arms liberally to non-Muslim applicants' for self-defence, he reassured a colleague.

Some Delhi Muslims were indeed armed. They fought back against the police as well as the Hindu and Sikh gangs; among reported gunshot victims non-Muslims actually outnumbered Muslims 45 to 20. Though evidence of any conspiracy is scant, quite a few Delhi-ites seemed to believe that the city's Muslims posed as great a threat as the death squads, if not greater.

During the riots, officials trying to rescue Muslims often found the public less than eager to help. Owners of private cars and trucks removed key parts so that the authorities couldn't requisition the vehicles. Volunteer drivers pretended to get lost or to develop engine trouble when asked to deliver aid to Muslim areas. (Eventually the government enlisted idealistic students to ride along and watch over them.) Even four days into the rioting, the American military attache witnessed Army troops standing by as Muslim women and children were clubbed to death at Delhi's railway station.

Patel was more in tune with the popular mood than India's Prime Minister Jawaharlal Nehru. While the principle that Hindus and Muslims should be able to live together remained central to Nehru's vision for India, the Sardar was less sentimental. He did not trust that all of India's Muslims, many of whom had until recently supported Jinnah, had switched loyalties. If they did not think of themselves as Indians, he believed, then they belonged in Pakistan.

Nehru would almost certainly have lost an open fight with his deputy. Horrified by the casualty reports, the prime minister tried to ban Sikhs from wearing their ceremonial knives, known as kirpans. Patel pushed back, saying the decree discriminated against the Sikh faith.

'Murder is not to be justified in the name of religion,' Nehru protested. Yet after a 'violent disagreement' between the two men, the Sardar triumphed. Sikhs regained the right to carry their daggers after a 48-hour pause.

Nehru seemed to believe he had a better chance of quelling the unrest singlehandedly than by working through his own administration. He went 'on the prowl whenever he could escape from the (Cabinet) table, and took appalling personal risks,' Mountbatten's chief of staff Lord Hastings 'Pug' Ismay recalled.

Nehru would angrily face down mobs himself, rushing from trouble spot to trouble spot. A veritable tent city, filled with Muslim refugees, sprouted on the lawns of his York Road bungalow.

One night a Muslim friend named Badruddin Tyabji showed up at Nehru's door to alert him to an especially troubled area -- the Minto Bridge, which Muslims fleeing their Old Delhi neighbourhoods had to cross to reach the safety of refugee camps in New Delhi. Each night, Tyabji said, gangs of Sikhs and Hindus lurked nearby and sprung upon the defenceless Muslims as they trudged past.

Nehru immediately bolted from his seat and dashed upstairs. He returned a few minutes later holding a dusty, ungainly revolver. The gun had once belonged to his father Motilal and hadn't been fired in years. He had a plan, he told Tyabji. They would don soiled and torn kurtas and drive up to Minto Bridge themselves that night.

Disguised as refugees, they'd cross the bridge, and when the thugs tried to waylay them 'we would shoot them down!'

The stunned Tyabji was able to persuade the leader of the world's second-biggest nation 'only with great difficulty' that 'some less hazardous and more effective method for putting an end to this kind of crime should not be too difficult to devise.' Mountbatten feared Nehru's impulsiveness would get him killed, and assigned soldiers to watch over him. 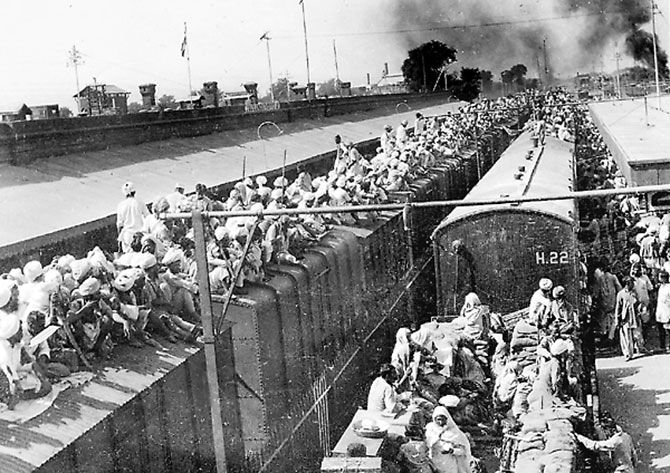 IMAGE: Sikhs flock aboard a train to India to escape the violence of the Partition riots after the bifurcation of Punjab. Photograph: Wikimedia Commons

Nehru's individual heroics evoked great admiration in men like Ismay and Mountbatten. But they did little for Delhi's Muslims. After the initial wave of attacks, thousands had fled their homes. Authorities almost immediately started evacuating the rest, claiming they could not guarantee the safety of residents if they remained where they were.

Muslims were dumped in guarded sites by the truckload -- places which it would be generous to describe as refugee camps. Within a week, over 50,000 were crammed into the Purana Qila, a ruined fort. They huddled pitifully on the muddy ground with no lights, no latrines, and hardly any water or food. The Pakistan government flew in shipments of cooked rice and chapatis all the way from Lahore to feed them.

Ismay melodramatically compared the scene at the Purana Qila to 'Belsen' without the gas chambers. Dignified Muslim professors and lawyers were squashed next to cooks and mechanics, longtime Gandhians next to stranded, would-be Pakistan bureaucrats. Wounded and sick moaned without medical attention; babies were born in the open. Armed Sikhs patrolled the one choked entrance, taking down the license plate numbers of Europeans driving in to deliver food and supplies to their friends and former servants.

With the help of Gurkha and South Indian troops -- who were less vulnerable to the sectarian passions roiling their northern counterparts -- authorities managed to control the worst of the violence within a week.

Volunteers began to clean up the streets, and ration shops reopened. Nehru asked the governors of other Indian provinces to take in tens of thousands of Punjab refugees, to get them out of the capital.

But the riots fatally undermined any trust Pakistani leaders may have had in their Indian counterparts. Nehru's estimate that 1,000 victims had died in the rioting was generally considered 'ridiculous,' according to US Ambassador Henry Grady. He figured the true toll to be at least five times higher; others said 20 times.

At the height of the violence, Pakistan's founder Mohammad Ali Jinnah was inundated with hysterical reports from his ambassador in Delhi, Zakir Hussain. Hundreds of Muslim refugees had carpeted the grounds of his house, Hussain reported, and the embassy's food supplies were running out. He described the Indian government as either intent upon eliminating the capital's Muslim population, or indifferent to their fate. Army troops were openly gunning down innocent Muslims. In one particularly florid cable Hussain warned, 'The entire Muslim population of India is facing total extermination.'

A conviction was taking hold among Jinnah and his lieutenants that India had launched an 'undeclared war' on the weaker Pakistan. The Indian leaders seemed incapable of transferring Pakistan government servants to the new capital Karachi, or of protecting them in their Delhi homes. Cargo trains full of equipment and supplies meant for Pakistan were being derailed and torched in the Punjab. At least some members of the Indian Cabinet appeared to be winking at the Sikhs' murderous activities. 'It is obvious that their orders are not carried out,' one of Hussain's cables said of the Indian leaders, 'or at least different members of the government are following conflicting policies.'

In mid-September, Ismay spent three days in Karachi trying to convince Jinnah that the Indian government bore Pakistan nothing but goodwill. Jinnah was dismissive. He was convinced that Sikh and Hindu militia leaders had planned the violence in the Punjab as well as Delhi. Though intelligence had given some inkling of their plans over the summer, they had been allowed to walk free.

With her vast resources and powerful military, Jinnah believed, India could even now have suppressed the Sikhs if only Nehru had had the necessary 'will and guts.' Instead he could not even guarantee the safety of Muslims in his own capital.

Ismay returned to Delhi profoundly depressed. In a secret codicil to his report, meant for Mountbatten's eyes only, he warned that Jinnah had begun speaking in dangerously warlike tones. In the very first hour of their talks the Pakistani leader had struck Ismay 'as a man who had given up all hope of further cooperation with the Government of India.'

All that had happened in the month since Independence just 'went to prove that they were determined to strangle Pakistan at birth,' Jinnah had told Ismay grimly. 'There is nothing for it but to fight it out.'

Nisid Hajari is a member of the Bloomberg View editorial board and the author of Midnight's Furies: The Deadly Legacy of India's Partition, from which this is excerpted. 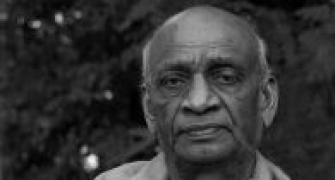 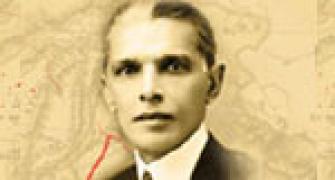 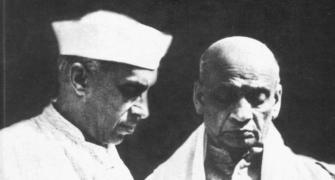 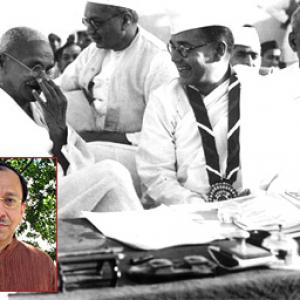