'Chinese leaders rarely receive their foreign guests in cities other than Beijing. Such respect for India!'

'Does it mean that Modi could replicate "the warmth and unconventional way" by sending Indian troops into Tibet, as Xi did in Chumur (Ladakh) when he arrived in India? Of course, Indians are far too polite to do so,' says Claude Arpi.

'Hello China,' Prime Minister Narendra Modi tweeted in Chinese as his first message on the Chinese microblog Weibo: 'Looking forward to interacting with Chinese friends through Weibo.' Will a few tweets help Modi, the third-most followed world leader on Twitter, to tackle the issues facing Sino-Indian relations? No!

Immediately after Modi's 'hello,' a Chinese Weibo shot back: 'The southern part of Tibet belongs to China, and Kashmir belongs to Pakistan. Mr PM please return the lands of other countries first before we start talking about how to get along well.'

The relations between Delhi and Beijing are too complicated for a few slogans to make the difference, while at every level, the balance of power tilts in favour of China.

In fact, all bilateral issues, whether it is the border dispute, the trade imbalance, the stapled visas for Kashmiris and Arunachalis, the opening of new consulates, the Tibet issue; none of these problems can be solved easily due to the economic imbalance, as well the difference in border infrastructure and military power.

But there is an imbalance of 'vision' too.

A few weeks ago, a Press Information Bureau communique announced that the prime minister will visit Xian, Beijing and Shanghai from May 14 to 16, 2015. That was the 'normal' pattern for the prime minister's visit; the problem is that China is not a normal country. The Middle Kingdom dreams of dominating Asia and the World; India is only incidental to the Chinese Dream.

Further, India and China live in different worlds, with often-opposite mindsets and while ad hocism is the hallmark of the Elephant, the Dragon thinks far, far ahead. China watcher, Francesco Sisci recently wrote in The Asia Times: 'China works with long terms plans, its way of thinking and its political organization is all geared for the long term -- and, of course, they do not have elections every two or four years to press politicians into daily routines.'

Sisci cites China's New Silk Road, an extremely long term scheme: 'China now wants to make some progress on the development of the Silk Road and it can do it with Russia and Pakistan, the safest bets.'

And Beijing acts fast, China and Russia have just conducted a joint naval drill in the Mediterranean; a move which extends greatly the Middle Kingdom's sphere of influence. Though Chinese defence ministry spokesperson Geng Yansheng said: 'The aim of the drills is to deepen both countries' friendly and practical cooperation and increase our navies' ability to jointly deal with maritime security threats,' Sina Military Network explained the rationale: 'There is no doubt that joint military drills will always send a signal,' further admitting: 'The target of the maritime exercise is obviously the US, which China feels has been interfering in China's expansion activities in the East and South China Seas by strengthening ties with Japan and the Philippines.' It also mentions the economic sanctions against the Russian Federation for annexing Crimea from Ukraine.

It is clear that China will first defend its interests. 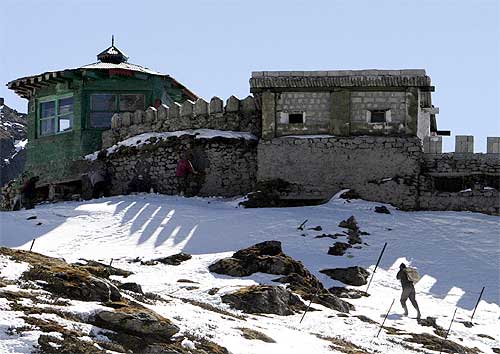 Now the question comes: How should India deal with China?

There are no simple answers, though it would be useful if the prime minister's team starts thinking ahead (a few years to start with) and find schemes on which India's friends and partners can rely.

In this perspective, the recently-held Varuna Indo-French naval exercises, which saw the Indian and French Carrier Strike Groups interact in the most sophisticated naval training so far, were interesting. It is vital for Delhi to engage with 'friendly' navies and learn from those who have the required experience, ships and armament and there are very few!

This too will not stop China's rise.

While several American 'experts' have started talking of the 'cracking up' of the Middle Kingdom, Beijing does not bother much and continues with its initiative to build a 'parallel' new world order, centered on China and Asia.

WantChinaTimes, a Taiwanese publication, mentions a 'new political, economic and security systems that China is setting up around the world in an attempt to realign the established international order dominated by the United States.'

During the Boao Forum for Asia, the Asian 'Davos', President Xi Jinping went on about his favorite topic, the 'One Belt, One Road' initiative. Xi asserted that the scheme would ultimately benefit 'all nations'.

The scheme has different rationales, though the main objectives are clearly for China to take the leadership of Asia and re-energise its economy.

The Silk Road Economic Belt will eventually link China, Central Asia, Russia and Europe, while the 21st-Century Maritime Silk Road will stretch China's influence to Europe through the South China Sea and the Indian Ocean in the West and to the South Pacific in the East.

The Silk Road projects would add more than 60,000 kilometres of road, including 4,070 km expressways, and improve the connectivity of the existing transportation network.

Both new 'silk roads' would involve 65 countries from three continents and 4.4 billion people. Xi spoke of an annual trade volume exceeding $2.5 trillion in a decade: 'Cooperation and coordination of policies will be win-win for all involved,' he affirmed.

Another much-talked about initiative is the Asian Infrastructure Investment Bank. Beijing no longer wants to be subjected to US financial controlling or monitoring.

The Chinese initiative is already considered as a success if one looks at the number of countries and territories from five continents who have applied to join the Beijing-led bank as founding members.

Though Japan will not join immediately, many Western capitals, including London, have declared their intention to jump into the boat. Washington, completely taken on the wrong foot, seemed to have lost a battle. In the US, former US secretary of state Madeleine Albright noted that the United State has 'screwed up' on the way it dealt with the AIIB.

Now take Xi's trip to Islamabad. The enormity of the 'gifts' that Chinese president brought in his luggage as he landed in Pakistan is flabbergasting.

Beijing has decided to help Pakistan to develop a China-Pakistan Economic Corridor which will eventually link up the One Belt and One Road.

In other words, the Chinese-sponsored port of Gwadar on the Arabian Sea will be connected through the Karakoram Highway to the Xinjiang province in China's Far West and Central Asia and later the Middle East, Africa and Europe.

Observers marveled at Beijing's kindness (and wealth), but one should not be fooled by Chinese generosity: Beijing is investing for China! With the country facing financial difficulties at home, with a slowdown of the economic engine, the leadership has devised the double Roads scheme to rebalance its own economy and perhaps more importantly, to become the sole leader of Asia.

Where is India in this scheme? Nowhere!

Does Delhi have such a grand project? No!

It was announced (in India) that Xi and his wife Peng Liyuan wanted to replicate 'the warm and unconventional welcome extended to him (Xi) by the Indian prime minister on his visit to India' by taking Modi for a trip to the ancient city of Xian, the capital of Xi's home province Shaanxi.

It will probably be enough to melt the soft hearts of the Indian delegation; Chinese leaders rarely receive their foreign guests in cities other than Beijing. Such respect for India!

Does it mean that Modi could replicate 'the warmth and unconventional way' by sending Indian troops into Tibet, as Xi did in Chumur (Ladakh) when he arrived in India? Of course, Indians are far too polite to do so. Once again, the gap in mindsets is too wide.

Analyst Brahma Chellaney believes: 'Indian diplomacy has long been shaped by personalities at the helm. Their propensity to act in haste and repent at leisure has been legendary, as India has ignored the sound advice of Talleyrand, Napoleon's famous foreign minister: "By no means show too much zeal".'

Without showing too much 'zeal' Modi could perhaps:

It is doubtful if the guest wants to embarrass the host.

In which case, India will have to wait for the 'cracking up' of the Communist Dynasty. It may take some time. 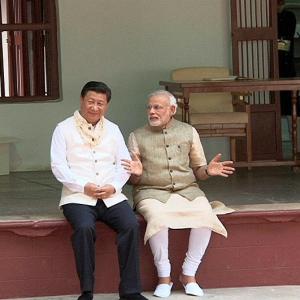