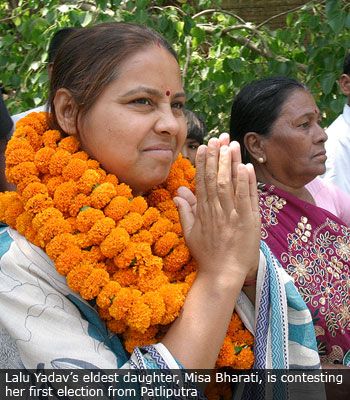 Dr Misa Bharati is fighting to win back Patliputra, the seat her father lost in 2009, in a contest that is a do-or-die battle for Lalu Yadav and the RJD.

Not a single home in Chakdula village has a toilet.

"Didi, we go to the fields. I can't tell you how difficult it is in the rainy season," says Gudiya Kumari, a teenaged girl who walks an hour to get to the government middle school.

The only school in the village is up to Class 5. It has one room, with two doors. Both the doors are locked. The school master who has the key did not show up today neither did the other teachers, say the villagers.

"They hardly come -- maybe 12 days in a month. Even when they are here, they are mostly listening to songs on the mobile. The school toilet that you see is also locked, it is only opened when the teacher wants to use it," says Niranjan Prasad, a farmer.

The village is an hour-long walk from the highway that joins Patna to Bodh Gaya. A mud road leading to the village is incomplete. Tar and stone chips are yet to be laid on the levelled mud track.

In the sizzling 40 degree heat, people wrap their heads with a gamcha (turban) and walk to the main road, where a ride to Patna costs Rs 40 one way.

"Patawan (irrigation) is the main problem. To get loans from the bank, we have to give a percentage as bribe. There is no college or hospital, for everything we have to run to Patna or Masauhri," says Shyam Prasad Chandravanshi, who works as a driver in Patna and is an ardent supporter of the Rashtriya Janata Dal's leader Lalu Yadav.

On prodding if there is anyone in the large group gathered there who has paid a bribe, the villagers clamp up. "If we tell you the names, whatever hope we have of getting a loan will also vanish," says a man in the group.

"Why did you not ask Misa all this when she came here to campaign?" we ask. 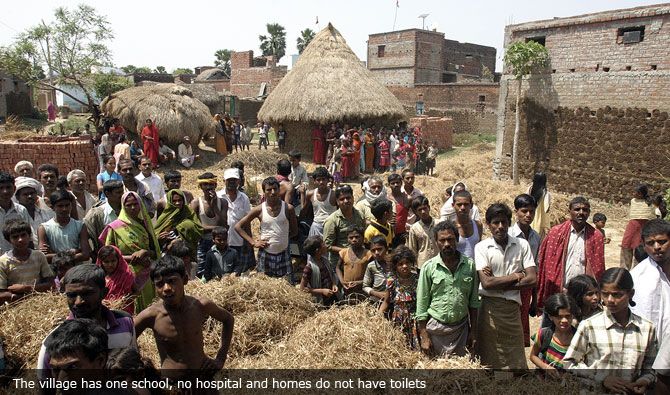 Misa Bharati, 39, Lalu Yadav's eldest daughter, is the Rashtriya Janata Dal candidate from Patliputra, the seat where her father lost to Ranjan Prasad Yadav of the Janata Dal-United in the 2009 election.

This is as much Lalu's fight as his daughter's. The stakes are perilously high for Lalu, with friend-turned-foe Ramkripal Yadav, who left the RJD for the Bharatiya Janata Party last month, pitted against his eldest child.

Lalu has pulled out all stops and campaigned the hardest for his daughter -- who was named Misa because her father was jailed under the Maintenance of Internal Security Act during the Emergency in 1975 -- holding rallies, road shows and public meetings.

The RJD was reduced to 4 Lok Sabha seats in 2009. Lalu lost Patliputra, but had a face-saver in Saran, the other seat he contested. In the grand dynastic tradition of India's political landscape, after his conviction in the fodder scam, his wife Rabri Devi will contest the election from Saran, and Misa from Pataliputra.

Misa had come to the village and asked for votes with folded hands. It was the first time she had visited these villages and told Rediff.com that she had discovered how hollow Chief Minister Nitish Kumar's claims of development were.

"I too had come with big dreams, but I can't bring myself to articulating them. In a place where there is no drinking water, how can I tell them I'll bring IT or make an educational hub?" asks Misa, the mother of two girls, who trained as a doctor but did not practise medicine. 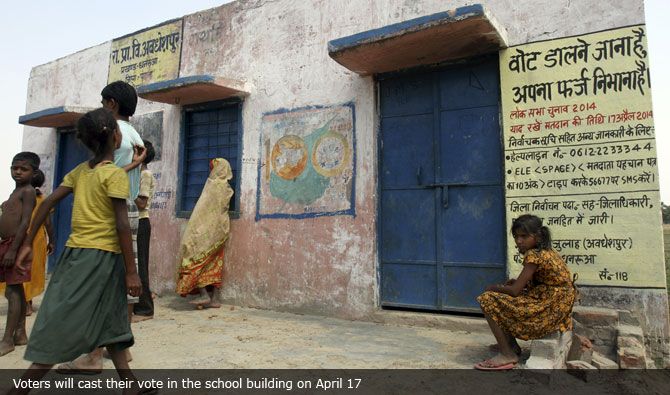 Travelling in an SUV with a pile of marigold flowers on the roof, she is accompanied by Amit Gaurav, who calls her didi and is a friend of her brother Tej Prakash. At the wheel is Lalu's trusted driver Dinesh.

"So many years after Independence, it is the misfortune of this country that we still haven't got these basics. God knows how long it will continue like this," she says. "This is true for the whole country, not only Bihar."

Calling herself the daughter of the JP (Jayaprakash Narayan) revolution, Misa says she can relate to the hardships of the people in her chhetra (constituency) because of her hard childhood.

"I have lived in a peon's quarters. I have passed my 10th from there. I know what struggle is," she says, giving an impassioned response to criticism about dynasties in politics with rehearsed accuracy.

"There are dynasties in politics, but there is also politics without dynasty in India. Political dynasties are prevalent from Kashmir to Kanyakumari. Someone who has interest and is in a political family, should s/he not join?"

"We are not living in a monarchy where you can inherit the throne. Finally, you have to win the people's vote. Yes, I have inherited a political legacy -- but it's a legacy of struggle and service, not of power." 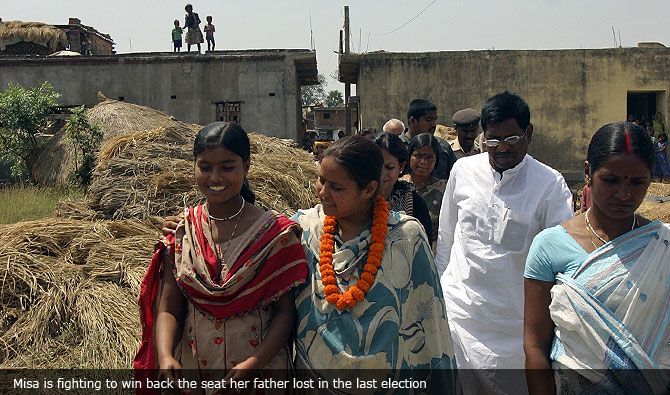 The twin villages of Awdhespur-Chakdula are inhabited by people of 12 castes, dominated by the Yadavs, whose votes are being sought by Yadavs contesting from the three main parties in the fray -- the RJD, the BJP and the JD-U.

"If Laluji's daughter wins, let's see if she does work here. If she doesn't, Laluji's political dynasty will be finished. If they work -- mother, father, children -- the dynasty will continue," says Chandravanshi, visibily upset that Ramkripal Yadav has "poonjipatiyo ka haath bik gaye (sold himself to the party of businessmen-traders)."

One of the founders of the RJD with Lalu, Ramkripal Yadav, a Rajya Sabha MP, left the party after Misa was declared the RJD candidate from Patliputra. A strong grassroot leader with mass contact, it is a tough battle against 'Chacha' Ramkripal for Lalu's beti.

"The JD-U-BJP split has made space for the RJD. But if neither Misa or Rabri win, it is going to be a staggering loss for Lalu," says Professor Prabhat Ghosh at the Asian Development Research Institute, a prominent think-tank in Patna.

The BJP has conducted an aggressive campaign in Bihar. Narendra Modi has made five trips to the state since the poll season began. Since April 10, he addressed six meetings in different parts of the state, including one for Ramkripal Yadav in Bikram. 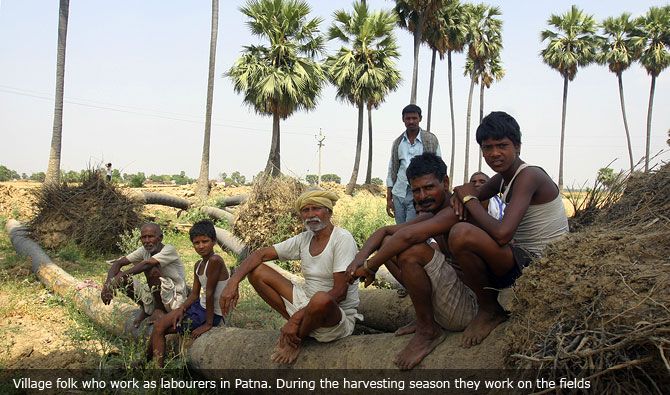 When a television reporter asks Misa whether she senses a Modi wave, she asks him to instead ask the people that surround her on the verandah of a house her handlers have made her stop at.

The women stand on one side, an old woman fans her with a fan made of dried palm leaf, as Misa passes by. Villagers later say the home where she stopped is actually a community hall built by the government, but is almost entirely used by one family.

She walks around the village, gets back into the car, stops along the mud road to greet people, accepts garlands as local RJD volunteers distribute pamphlets and shout slogans praising Lalu Yadav.

"I have only one political hero -- my father," says Misa, who remembers going on campaigns with her father in the early years when he was an MLA.

"He has told me that politics is no time-pass. It needs whole-hearted commitment. Laluji is a political institution. He can explain the most complex problems with a sense of humour."

Undettered by her father's conviction in the fodder scam, she says that since the case is sub-judice, it would not be right for her to comment.

"Those who took money have gone scot-free and those who highlighted the case have been trapped," she says, sitting in the front seat of the SUV.

Some observers feel the RJD-Congress alliance will come second behind the BJP in Bihar, followed by the JD-U, a party credited for turning the state around, which ran a coalition government with the BJP till June last year.

"For a performing government to be placed third is unexpected, unfortunate, unusual," says Professor Ghosh. "The trouble with the JD-U is that it doesn't have a cadre or a committed social base like the BJP. Apart from Yadavs and Muslims -- many others in the middle category have some feeling for the RJD." 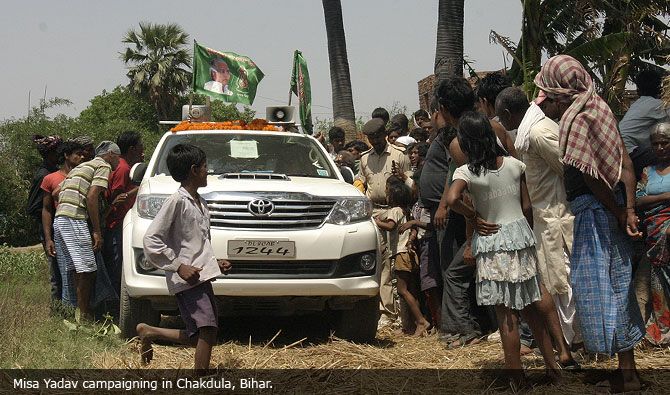 Amit Gaurav, a BA student, says "Misadidi" works very hard on her campaign, from 7.30 am to past midnight.

On the day we meet her, she is asked a couple of times to come to the village temple where voters await her, but she refuses, saying it would violate the Election Commission's Model Code of Conduct.

The election machinery is in full cry in Patna city. Cars with 'On Election Duty' stickers, a kiosk outside the city's biggest mall to encourage young people to vote, police check posts to check vehicles if they are carrying money to bribe voters.

Voters in Awdheshpur-Chakdula will vote in the school building on April 17. On that day, the school will be open. 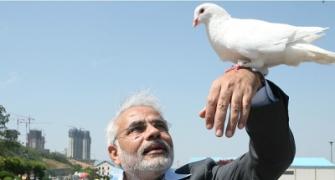 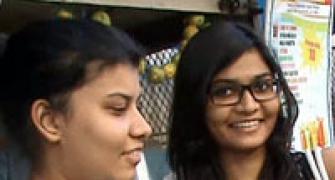 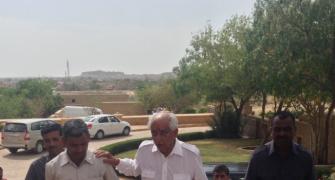 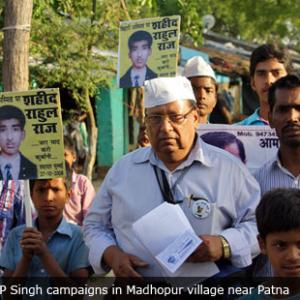 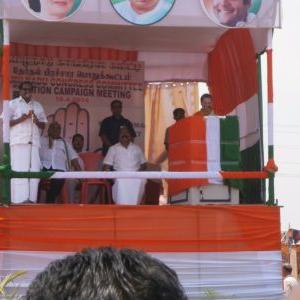 Sonia in Tamil Nadu: The BJP is a one-man party