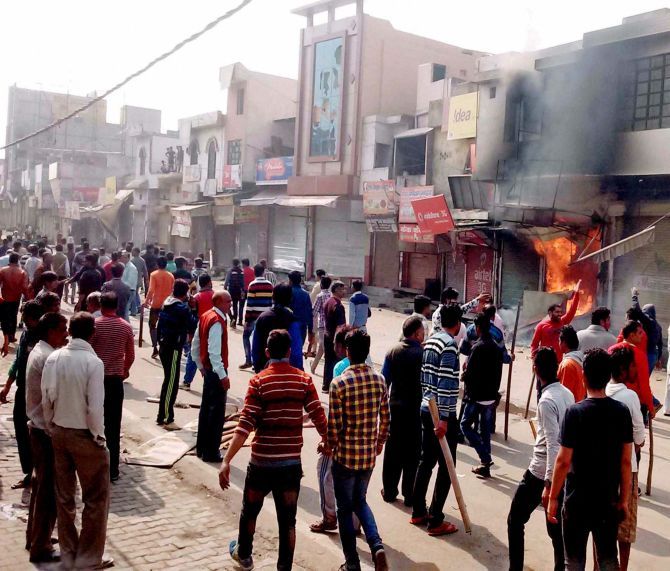 The ferocity of the attack by the Jat community across Haryana has shaken the chief minister and his ministerial colleagues who were unable to gauge that the reservation issue would take such a violent turn.

Khattar had been assured by his Jat ministers that they were in dialogue with the protesters and would be able to contain the agitation. The CM made little effort to assess the situation on his own and this can be best gauged from the fact that when the flare-up took place, the CM, his ministers and most of his senior bureaucrats were in Chandigarh.

Says one Jat minister, speaking on condition that he would not be identified by name in this report, "From being an RSS pracharak he was catapulted to the seat of chief minister. Thirty nine of the 47 BJP MLAs are first-timers and were equally at sea. That is why although the state has been boiling for eight days, the CM and his colleagues have taken no political initiative to reach out to the Jat community."

Even after the agitators became extremely violent, Khattar did not issue orders to the police to use force and kept insisting they use tear gas to disperse the agitators.

Within hours, the violence had spread across the state engulfing most of its major cities including Sonepat, Rohtak, Jhajjar, Jind, Gurgaon, Hissar, Karnal, Faridabad and Bhiwani. 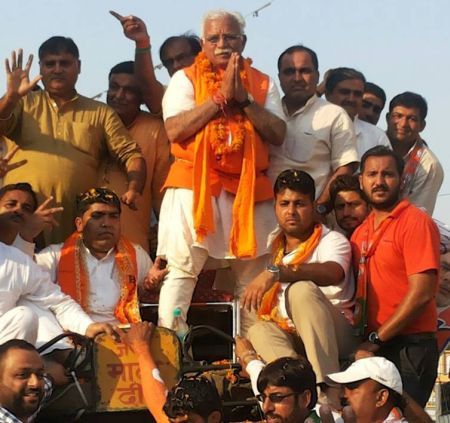 IMAGE: Haryana Chief Minister Manohar Lal Khattar: 'Although the state has been boiling for eight days, the CM and his colleagues have taken no political initative to reach out to the Jat community.'

"When we asked for 90 companies," says a senior police officer, "we were given three. Firing of tear gas shells or caning the agitators could hardly be expected to rein them in."

Khattar's problems may have been compounded by the fact the majority of the police force comprises Jats who are reported to have been unwilling to take action against members of their community.

Haryana has paid a heavy price with most of its large and small industrial units having faced a shut down. ASSOCHAM estimates the state has suffered losses of over Rs 20,000 crore (Rs 200 billion) due to the destruction of private and public property while the collateral damage to neighbouring Delhi, Rajasthan, Uttar Pradesh and Punjab runs into several more thousand crores of rupees.

The Jats remain unrepentant about having held the state to ransom for over a week. An aggressive Yashpal Mallik, president of the All India Jat Reservation Agitation Committee, says, "BJP MP Raj Kumar Saini from Kurukshetra has been making the most inflammatory statements against the Jats for the last one year. He went to the extent of calling us 'sons of pigs.' Why was no attempt made to rein him in?"

The BJP's central leadership has served Saini a show cause notice, but this is a case of too little too late. Jat leaders believe Saini's inflammatory speeches were made at the behest of BJP President Amit Shah who they allege is trying to create a divide between the Jat and Other Backward Classes because the Jats have traditionally been non-BJP voters.

"The BJP has created an OBC brigade, which is a loose coalition of the backward classes to cut the Jats to size," Mallik insists.

Jayant Chaudhary, general secretary of the Rashtriya Lok Dal, agrees with Malik. "When the BJP were selecting the CM for Haryana," he asks, "what was the need for the BJP president to say publicly that we will select a non-Jat CM or that no Jat leader was being considered for the top post?"

"All the Jat ministers at the state level and Union Minister for Rural Employment Birendra Singh have complained against Saini's incendiary statements to Amit Shah who failed to take any action against him," adds Chaudhary, the late prime minister and Jat icon Chaudhary Charan Singh's grandson.

"It is obvious the BJP's aim is to create a divide between Jats and non-Jats," he alleges. 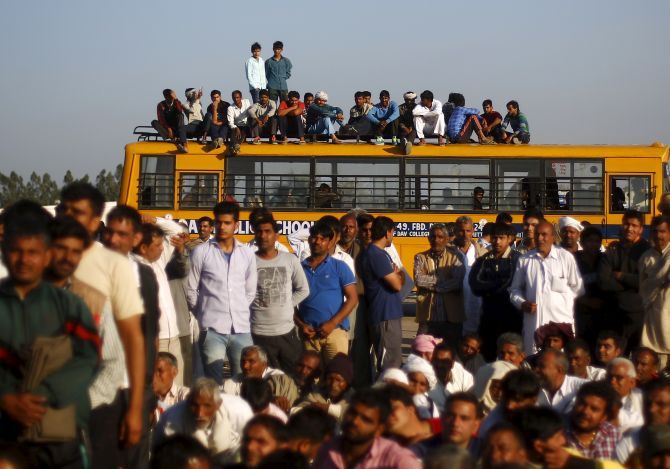 Bhupinder Singh Hooda -- Khattar's predecessor as chief minister -- whose constituency Rohtak witnessed the worst rioting refuses to comment on the violence. Sitting on a fast at New Delhi's Jantar Mantar, Hooda insists, "My priority is that harmony and peace return to the state. Although I am a political man, there are several reasons for the eruption of such unprecedented levels of violence."

"I have many questions to ask -- why goondas and anti-social elements were allowed to take over peaceful protests -- but I will go public about my apprehensions later."

Hooda has been drawn into a controversy with one of his former political advisors, Professor Virender Singh, recorded on an audio clip, encouraging a Khap leader Kaptan Mann to ensure that student bodies step up the violence in Sirsa.

Professor Singh admits the voice on the audio is his, but claims he did not instigate the Jats to go on the rampage. The Khattar government has ordered an enquiry to ascertain the veracity of the audio recording.

Mallik and other Jat leaders including Dr Virendra Sindhu have accepted the state government's proposal to bring in a Bill to grant OBC status to Jats in the coming assembly session. The Centre has announced that Union Urban Housing Minister M Venkaiah Naidu will head a committee to examine the demand by Jats for reservation in central government jobs. 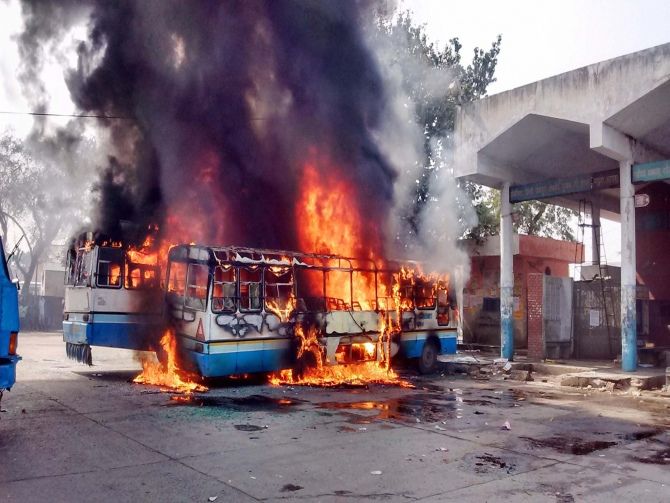 Eight days of agitation left 19 youth killed and over 150 injured. This has caused further unrest amongst the Jat community.

One in a group of young boys at a roadblock near Nangloi asks why the army had been called to shoot at "his people."

"The Jats have given the most people to the army and yet the CM uses the same army to shoot and kill us. What were our leaders like (Haryana minister) Captain Abhimanyu and others doing when the army was firing at us?" asks one young man who gave his name as Sanjay.

The reservation issue in Haryana is a tricky one. Traditionally, Jats have been seen as the king makers of Haryana with seven out of the ten chief ministers in the state having been Jats. In the 90 assembly constituencies, Jats are in a majority in 35 to 40 seats.

The Jats were also angered by Khattar's failure to assign any of his Jat ministers like O P Dhankar or Abhimanyu Sandhu to reach out to the agitators. This failure saw angry mobs stoning and trying to set fire to these and other ministers' homes.

While the Jats in Rajasthan, UP and Delhi were given reservations, their caste counterparts in Haryana missed out. The Jats in Nangloi, which falls within Delhi, enjoy reservation, but their caste brethren living five kilometres away in Haryana do not enjoy the fruits of reservation.

"This has built up a strong sense of resentment within the community," says Mallik, the president of the All India Jat Reservation Agitation Committee. "The BJP in its election manifesto had promised reservations, but on coming to power in the state, failed to do so."

"BJP MP Raj Kumar Saini openly opposed reservations for the Jats and on many occasions swore he would resign if there was any dilution of the OBC quotas to accommodate the Jats," adds Mallik.

The Jats remain a largely agrarian community. With farm holdings shrinking, with farming no longer being economically viable, large numbers of Jat youth are moving to the cities in search of jobs.

Large scale unemployment, rise in drug addiction, alcoholism and worse, an acute shortage of brides due to the unequal sex ratios has created strong sentiments of grievance.

This sense of aggrievement has been witnessed in the protesters who have taken control of the Munak canal. The men and women gathered there warn, 'If we are going to be kept hungry, then the people of Delhi will be made to die of thirst.' This one canal supplies 50 per cent of the capital's water needs.

The fact that the protestors did not think twice in damaging the canal does not portend well for the nation. 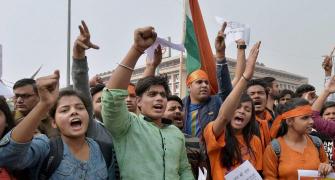 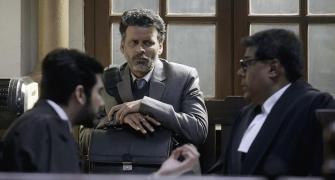 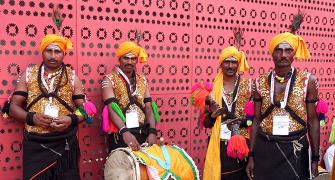 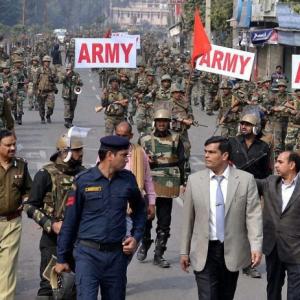 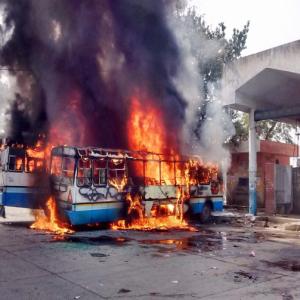