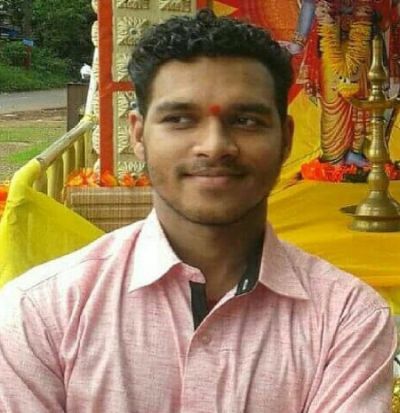 Why does this Kerala district see so many political murders and revenge killings?
Shobha Warrier/Rediff.com finds out.

On the night of February 15, P V Sujith, 27, seen left, was hacked to death at his home at Papinassery in Kerala's Kannur district. His terrified parents tried to protect their son, but were injured in the murderous attack.

Before dawn, the police arrested six Communist Party of India-Marxist workers for murdering Sujith, a member of the Rashtriya Swayamsevak Sangh.

Sujith's slaying is the latest in over 180 political murders committed in Kannur district from the 1980s onwards.

"The earliest political murders were reported in the early 1960s, though on a small scale," says Babu Bhaskar, a well-known journalist.

The reason was usually because an individual left the Communist Party -- later the CPI-M -- and joined a rival political party. If it was to join the Socialist Party and the Congress in the 1960s, it is the RSS today.

Sujith was a member of the CPI-M till three years ago. His abandoning the party was apparently not taken kindly to by some in the local Marxist leadership.

What is the connection between Kannur and Communism, you ask. Historians say the guerrilla war launched by Pazhassi Raja, the ruler of Kottayam province, against the British had a huge impact in Kannur, which is located in Malabar, north Kerala.

Having spawned giants in the Communist movement like A K Gopalan, E K Nayanar and Azhikodan Raghavan, a large section of the electorate in Kannur tilts towards the CPI-M. Seventy per cent of the panchayats in Kannur are governed by the CPI-M-led Left Democratic Front.

The Bharatiya Janata Party increasing its vote share three fold startled the CPI-M. In the recent local body elections, the BJP won 13 village panchayats, which did not go down well with the Left.

Most of those killed, Bhaskar points out, are from the toddy-tapper community: The Thiyyas, a caste variant of which is called the Ezhavas in south Kerala.

"The Thiyyas have been traditionally with the Left and when someone deserts the party," says Bhaskar, "we see that there is an attempt to kill him. The CPI-M somehow dissuades people from leaving the party by killing deserters."

As the Thiyya and Ezhava communities are seen as mostly CPI-M supporters, more so in Kannur, the party is not happy that Velapally Natesan, the head of the community outfit, the Sree Narayana Dharma Paripalana Yogam, has aligned with the BJP for the coming assembly election.

Those who leave the CPI-M and take refugee in a rival political party are also suspected of involvement in political murders and violence at some time or the other. RSS worker E Manoj, who was murdered on September 1, 2014, was an accused in the case where P Jayarajan, the CPI-M district secretary, was stabbed in 1999.

Kannur is considered the CPI-M's strongest bastion in Kerala, says V Muraleedharan, former president of the state BJP. "So they cannot tolerate anyone deserting their party and joining another party. When workers find that CPI-M leaders preach something and practice something else, they get frustrated."

"They understand that the CPI-M leaders are in real life not pro-poor," alleges Muraleedharan. "They fight against foreign universities coming to Kerala, but they send their children to study abroad. They fought against self-financing colleges. Now the CPI-M is the largest owner of self-financing colleges in Kerala. The rank and file understand this."

Both the BJP-RSS and CPI-M blame each other for the revenge killings. Sathyaprakash, the BJP's Kannur district secretary, says the Marxist party's "fascist nature is the reason behind all the attacks and murders."

Kannur is one district where the Marxists have a huge influence, says Sathyaprakash, and the CPI-M considers it insulting when a party worker joins another party.

"When youngsters frustrated with the CPI-M got attracted to the RSS," he says, "the party could not accept it. So, they resorted to killings. The first such killing was that of Chandran, a college student in 1978. He was tied to a coconut tree and murdered in a gruesome manner."

Sathyaprakash claims innocence when asked if the BJP-RSS has been involved in political murders. "We have not planned any murder of any Marxist leader," he says, adding cleverly, "we have only retaliated."

M V Jayarajan, a well-known CPI-M leader from Kannur, says that most of those murdered belonged to his party. "All these murders are happening because we fight against communalism and the dangers it spreads in the state," he says.

The politics of intolerance and revenge, Jayarajan says, began in Kannur in the 1970s, but it became a battle between the CPI-M and RSS because "we are in the forefront to stop the RSS from spreading communalism in the area."

Kannur Superintendent of Police Hari Shankar describes something unique about Kannur -- villages in the district are literally owned by political parties.

In a village dominated by say CPI-M members, they see to it that land and houses are only sold to people within the party fold so that the village is controlled by the Marxists.

"There are areas where we have to do a lathi-charge for every arrest. This is one place where people live based on party lines."

The BJP's Muraleedharan accuses the CPI-M of not allowing BJP and RSS workers to enter villages "owned" by the Marxists so that they can propagate their ideology. "We don't accept that. We have every right to propagate our ideology anywhere," he says. "They can't oppose it through violence."

When someone in the village changes his party affiliation and others follow him, Hari Shankar says tension in the community inevitably follows, leading to violence and even murder.

The superintendent of police describes Kannur as a place where people are passionate about politics and ideology.

"You see the most disciplined, well mannered and polite people here, but the problem is they are so passionate about politics that once they take up a cause it is very difficult to bring them back to a different route."

"One character of this district is all are passionate and political violence happens because they are passionate," the police officer adds.

Hari Shankar admits that Kannur is a difficult district to manage because of the kind of passion the community has for politics.

He cites Sujith's murder which occurred at 11.30 pm. "When something like that happens at night," says Hari Shankar, "we have to do two things. We see that there is no retaliation. We had to see that every CPI-M office and leader is safe from retaliatory attacks."

"Second, we have to find and arrest the accused as soon as possible because if we don't do it before the next day's martyr's procession, there will be violence."

"If we arrest the accused," he adds, "the procession of 5,000 to 6,000 people will be peaceful. Or else, we will see aggression against the police and public property. We hardly get hours to prevent retaliation and arrest the accused."

"Sujith's martyr's procession," the police officer says, "was one of the most peaceful because we had arrested the accused at night itself. In fact, those who participated in the procession shook hands with the police for doing our duty so diligently."

The folk songs of Malabar (vadakkan paattu) are full of stories of revenge killings and Bhaskar thinks that could be one reason why people in the region resort to revenge politics and murders.

"Some people have come out with this explanation that the ballads have glorified revenge killings. The folk songs challenge the deserters and bay for their blood," says Bhaskar. "The good thing is that this kind of violence is confined to Kannur and has not spread to other parts of Kerala."

A few years ago though, Bhaskar recalls, in retaliation to what happened in Kannur, RSS workers attacked the CPI-M's national headquarters in Delhi, the CPI-M state secretary in Karnataka, Visakhapatnam and Madurai on the same day.

"After that, there was a softening on both sides and violence happened only in the villages of Kannur," he adds.

Jayarajan blames the BJP and RSS for scuttling peace talks. "When the collector called for peace talks, they boycotted the meeting five times. Even the day after RSS chief Mohan Bhagwat called for peace, we saw violent activities by the RSS. If the CPI-M is for debates, the RSS is for violence," he says.

"We don't believe in weapons and violence," the Marxist leader claims. "If you see the politics of intolerance in northern India now, it has been there in Kannur for decades."

Muraleedharan scoffs at this accusation, saying that the dialogue did not happen because the CPI-M's offer for talks came with several riders. "We want peace in Kannur and Kerala. We are ready to have a dialogue with them if an independent body arranges it," says the BJP leader.

"The CPI-M is facing a big crisis in Kannur because the former district secretary is in police custody as an accused in the E Manoj murder case. CPI-M workers are losing confidence in the leadership."

"Is the RSS such a big organisation that it can kill so many people? We are a small organisation. This kind of barbaric politics is deplorable and all of us should make an effort to put an end to this." 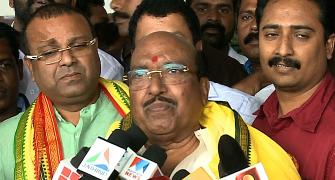 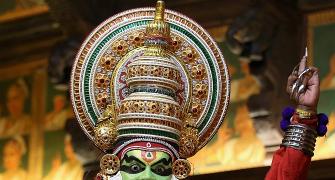 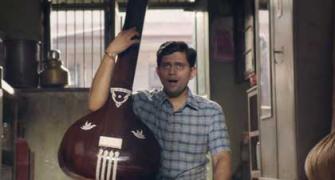 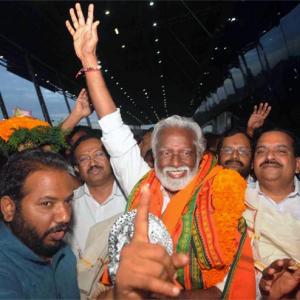 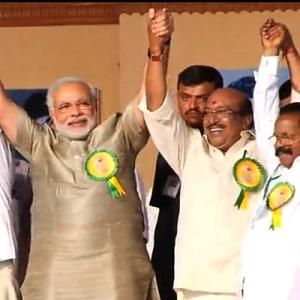