By Sheela Bhatt
May 02, 2012 13:45 IST
If Sharad Pawar, Mulayam Singh Yadav, Karunanidhi and the Left parties endorse the Congress's game-plan, it is difficult to see how Sonia Gandhi's choice will fail to become President, reports Sheela Bhatt

Bharatiya Janata Party leader Sushma Swaraj's premature remarks on the selection of the presidential candidate have given the Congress a psychological advantage.

By all indications, so far it seems that in the politics of selecting the next Rashtrapati, the Congress is set to beat the BJP.

Unless the Congress plays its typical deception and brings out a surprise candidate or a sycophant to disturb the emerging pattern, it seems certain that Pranab Mukherjee, Hamid Ansari and Meira Kumar are the front-runners, in that order. The opening gambit of the Congress's game-plan is to offer its allies relatively decent options.

In spite of being on politically weak ground due to a series of electoral, economic and all-round failure, the Congress is showing the confidence to see that no anti-Congress personality occupies Rashtrapati Bhavan.

From the speed with which news of the Defence Minister AK Antony-M Karunanidhi meeting on Monday was leaked out, it is obvious that the Congress is also as unsure as the National Democratic Alliance about the trajectory of forming a consensus on the presidential election. It is judging the mood of the political class at various levels.

In these unsure times, Sushma Swaraj has come to the rescue of the wary and cautious Congress.

On Tuesday, Sushma said the BJP would not support Mukherjee for the post of President while Vice President Ansari "doesn't have the stature" to become President. Her remarks not only lack sophistication, but also strategy. She said if Samajwadi Party boss Mulayam Singh Yadav supports former President APJ Abdul Kalam, the BJP would consider it, too.

But, in one stroke she has helped the Congress brand Kalam as a saffron candidate. It is certain that poor Kalam has been knocked out in the first phase itself, and that the Janata Dal-United, Left parties and the Congress will not support him. It is well-known that Kalam is not ready to be in the race if he is not the unanimous choice of all political parties.

Bihar Chief Minister Nitish Kumar is furious and has condemned Swaraj's remarks while JD-U chief Sharad Yadav has expressed his disgust at the BJP's unilateral moves. The BJP will be dismayed to see that before it could play spoilsport for the Congress in this game, its own boat has been rocked.

Within the NDA Nitish Kumar wants to see that his choice matters, and would ensure that even the BJP will not get his endorsement because its proposed candidate is a non-Congress person or anti-Congress. In the matter of presidential election, what West Bengal Chief Minister Mamata Banerjee is capable of doing to the Congress, Nitish Kumar could do to the BJP.

So far, Banerjee has not expressed her choice. She was in the process of taking Kalam's candidature seriously but has not given any indication to the Congress. Nationalist Congress Party's Sharad Pawar is in the process of finalising his choice and will be meeting Congress leaders today. Mulayam Singh Yadav supports Ansari but he is ready to extend support to Mukherjee as well. Just to snub Banerjee, the Communist Party of India-Marxist is likely to agree to support Mukherjee.

Vice President Ansari's supporters have done extensive homework among non-Congress and non-BJP parties and found that many leaders would like to support him. In fact, at this early stage, Ansari is already the second choice of most of the regional parties.

If the Congress's final choice for the post of President is acceptable to Nitish Kumar's JD-U or if the Congress's choice is not very provocative (say, some sycophant of the Gandhi family), then it's possible that the NDA may not remain united in opposing the candidate proposed by the Congress.

According to sources, one proposal by political intermediaries doing the rounds is to let the BJP support the Congress's candidate for the President (and, thereby arriving at a consensus) and letting the Congress allow its Jaswant Singh to be vice president. In this connection, even Najma Heptulla and Murli Manohar Joshi are named as possible choices.

However, a profound change that has emerged from the chaotic first round of the selection process is that the distance between Pranab Mukherjee and 10, Janpath seems to have reduced. Reports of the meeting between Antony and Karunanidhi indicate that Mukherjee is one of the firm choices of Sonia Gandhi for the post of President -- at least, in the first round. That itself is a case of poetic justice for the Bengali babu who once dared to stake claim to the highest seat of power after his mentor Indira Gandhi's assassination.

But, it also raises the question.

If Sonia Gandhi is really ready to elevate Mukherjee to the post of President, then what stops her from making him prime minister? As Swaraj has rightly said, looking at the 2014 election scenario the importance of the President has increased. If "President Pranab Mukherjee" is conducive enough, why can't he be trusted to run the government?

If Pawar, Mulayam Singh Yadav, Karunanidhi and the Left parties endorse the Congress's game-plan, it is difficult to see how Sonia Gandhi's choice will fail to become President. The Congress has only around 31 per cent of the votes required to see its candidate in Rashtrapati Bhavan but it may still have its say in the process because the BJP has not emerged as the acceptable pole to veer around for the regional parties. 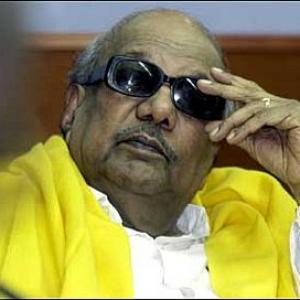 Will support whoever Sonia chooses as prez: Karuna