News
Business
Movies
Sports
Cricket
Get Ahead
Money Tips
Shopping
Sign in  |  Create a Rediffmail account
Rediff.com  » News » 'If BJP wants to commit suicide, who can stop it?'

'If Nitish Kumar is given more seats, then no one can stop the NDA from losing, even the BJP will be wiped out.'
Utkarsh Mishra reports on the BJP's problems in Bihar. 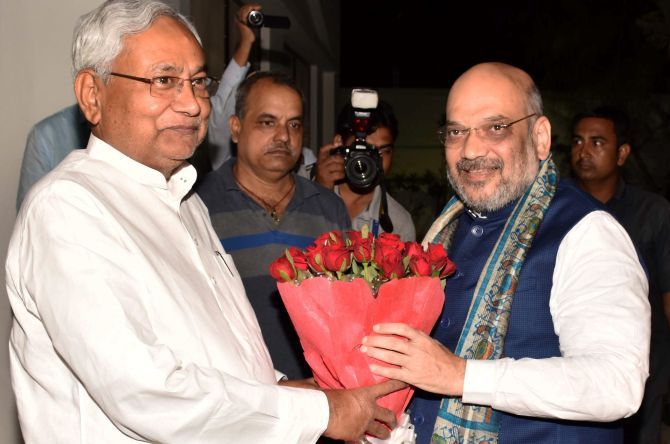 Over a week after Bharatiya Janata Party President Amit Anilchandra Shah announced, flanked by Bihar Chief Minister Nitish Kumar, that the BJP and Kumar's Janata Dal-United would contest an equal number of Lok Sabha seats in the state in the 2019 election, there is still no clarity over the National Democratic Alliance's seat-sharing formula.

There were reports that the BJP and the JD-U would contest 16 seats each. Of the remaining eight Lok Sabha seats in Bihar, six seats would be given to Ram Vilas Paswan's Lok Janshakti Party while the Upendra Kushwaha-led Rashtriya Lok Samata Party would be given two.

However, this was rejected by the RLSP which insists that no seat-sharing plan has been finalised yet.

A couple of days after Shah's presser, Kushwaha addressed reporters after meeting Bhupendra Yadav, the BJP's Bihar in-charge, and said that seat-sharing talks are still underway and a clear picture would emerge in two or three days.

However, no final announcement has been made so far.

Meanwhile, top RLSP leaders reiterate that they will not accept anything less than three Lok Sabha seats.

RLSP national General Secretary and spokesperson Madhaw Anand said that Shah and Kumar's press conference was only a matter between those two parties.

"It would have been better if other NDA members were also included in that discussion. Nonetheless, we want to see Narendra Modi ji again as prime minister in 2019 and we are strongly with the NDA," Anand told Rediff.com.

"But no seat-sharing formula which doesn't take into account our party's mandate will be acceptable to us," Anand added.

The RLSP had contested three Lok Sabha seats in 2014, he said, and won all of them.

"This time, too, we will contest not less than three seats," he said.

Echoing similar views, RLSP Working President Nagmani said, "The Bihar in-charge of the BJP has been told that if we are not offered respectable number of seats, we will take necessary steps."

In an earlier interview with Rediff.com, Nagmani had stated that the RLSP could have an alliance with Lalu Prasad Yadav's Rashtriya Janata Dal.

These rumours were fuelled by Kushwaha's meeting with RJD leader Tejashwi Yadav, leader of the Opposition in the Bihar assembly, at Arwal.

However, both Kushwaha and Tejashwi termed the meeting as a coincidence.

"Kushwahaji's programme in Arwal was already fixed. When he reached there, he found that Tejashwi was already staying at the circuit house," Anand said. "When Tejashwi came to meet Kushwahaji with his followers, he couldn't have refused."

"The meeting should not be seen politically," Anand added, "If Tejashwi made any political statements after that, then it was his prerogative. The RJD would also want to have a partner like the RLSP. But we are strongly with the NDA."

Nagmani, however, is less forgiving.

"If we are not given a fair share of seats, we will sit and decide the fate of our alliance," Nagmani said. "In Madhya Pradesh, the BJP did not want us to fight elections. But we have already declared candidates on 66 seats."

"We are an independent party, not tied to anyone. Why will we have an agreement with a party that doesn't treat us with respect?" Nagmani asked.

"I have said so many times that Nitish has only 1.5 to 2 per cent vote in Bihar. If he is given more seats, then no one can stop the NDA from losing, even the BJP will be wiped out," he said.

Anand, on the other hand, expressed hope that the BJP would consider giving three or more seats to the RLSP.

"The BJP is the largest party in the world and it sees everything. For the BJP, Uttar Pradesh and Bihar -- having 80 and 40 Lok Sabha seats respectively -- are most important states for the 2019 polls," Anand said.

"The BJP knows the caste equation in Bihar and our 10 to 15 per cent votes can't be ignored. Moreover, Upendra Kushwahaji has the support of all communities and not just the Kushwaha community," Anand added.

"If there is a star performer in the NDA in Bihar, it is the RLSP," Anand asserted. "We contested three seats in 2014 and won all of them with over a lakh votes. Since then, our support base has only expanded."

"No seat-sharing formula that doesn't take into account this increased mandate of the RLSP will be accepted," Anand warned.

The BJP's Shah, he said, has only announced that the BJP and the JD-U would contest an equal number of seats in Bihar.

"He did not specify how many seats each NDA partner will get. I can assure you that this time also we will get at least three seats, if not more," Anand said.

Unlike the JD-U, he said, the RLSP believes in alliance dharma.

"We are putting forward our demands through proper channels and we are confident that they will be accepted," he added.

On being asked if newly-appointed JD-U Vice-President Prashant Kishor's proximity to Narendra Damodardas Modi could be the cause of the BJP's indifference towards other allies, Anand retorted that he did not know anybody with that name.

"Who Prashant Kishor? Who is this new leader in Bihar? Are you talking about the person whom the Congress workers in UP were searching with 'Missing' posters and banners after their rout in the assembly election last year?" Anand asked.

"Bihar has no dearth of leaders. There is Upendra Kushwahaji, (Bihar Deputy Chief Minister and the BJP's senior leader in Bihar) Sushil Modiji; Nitishji himself is there. Then why talk about a person whom no one knows?" Anand asked.

"We are with the NDA since 2014. Nitish Kumar came back only in 2017. There cannot be a seat-sharing agreement without consulting all NDA partners," Anand said.

Why does the BJP seem to care only about the JD-U despite such clear statements by the RLSP leadership?

"We have said so many times that Nitish has only 1.5 to 2 per cent votes. If the BJP gives 16, 17 seats to the JD-U and only two seats to our party, which has a much larger mandate then it would be a suicide for the BJP," Nagmani warned.

"If the BJP wants to commit suicide, then who can stop it?" 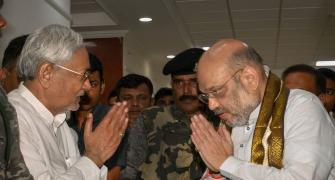 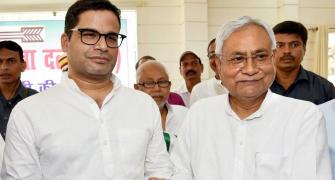 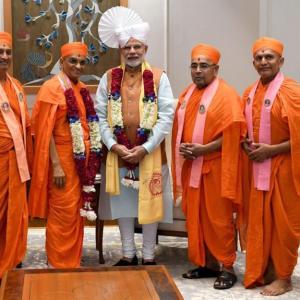 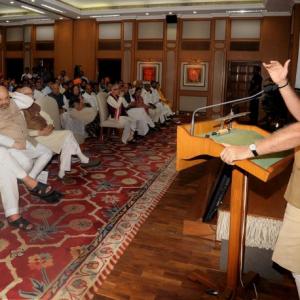