If the Cauvery water-sharing dispute between Karnataka and Tamil Nadu -- dating back to 1892 between the erstwhile Madras Presidency under the British Raj and the princely Mysore state -- has exploded again into a war, the discord between Karnataka and Goa over dividing the water of the Mahadayi river simmers under the surface, says Radhika Ramaseshan. 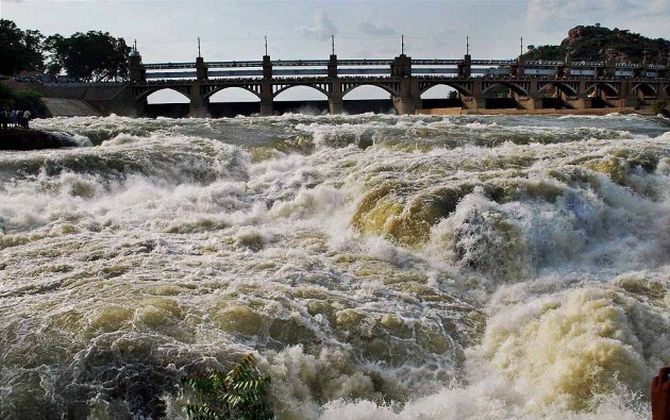 The Congress might hope that the Karnataka government's decision to grant a 'minority' status to the Lingayat and Veerashaiva-Lingayat castes will impact the Bharatiya Janata Party's tactic to consolidate the state's Hindus by dimming the caste fault lines.

The BJP might persist in using issues like the advocacy of militant vegetarianism and 'nationalism' to answer the caste challenge.

Beneath the political potency that such factious subjects have, Karnataka is grappling with more serious state-related matters that impinge as much upon the Centre's ability to adjudicate fairly and seek resolution.

One of the issues is a perennial one, involving the distribution of the waters from the rivers flowing through Karnataka and its neighbours. The issue works up emotions to the same degree as a communal one might and sets off conflicts between local communities.

If the Cauvery water-sharing dispute between Karnataka and Tamil Nadu -- dating back to 1892 between the erstwhile Madras Presidency under the British Raj and the princely Mysore state -- has exploded again into a war, the discord between Karnataka and Goa over dividing the water of the Mahadayi river simmers under the surface.

The altercation might have blown up before the assembly elections, had Goa Chief Minister Manohar Parrikar not been out of action. Parrikar is away in the United States for medical treatment.

Tamil Nadu's principal Opposition party, the Dravida Munnetra Kazhagam, called a bandh on April 6 to protest a Supreme Court ruling on Cauvery and the Centre’s 'inability' to work for an amicable resolution despite being directed by the apex court to seek one.

To retaliate, Karnataka activist Vatal Nagaraj has announced a shutdown on April 12 to force the Centre not to 'succumb' to the DMK’s pressure for setting up the Cauvery Management Board.

Nagaraj is not a peasant leader in the mould of Karnataka legends like K S Puttamaiah and Professor M D Nanjundaswamy because he is used to flagging issues that play on popular emotions and could fuel the rhetoric used by political parties.

Cauvery is one of them because in 2017, Nagaraj protested against comments made by Sathyaraj, a Tamil film actor, during a Cauvery agitation spearheaded by the Tamil Nadu Actors’ Association.

On February 16 this year, the Supreme Court tweaked the 2007 verdict of the Cauvery Water Disputes Tribunal (set up in 1990) and increased Karnataka's share at Tamil Nadu’s expense.

The court also directed the Centre to formulate a scheme for apportioning water between Karnataka, Tamil Nadu, Kerala and Puducherry but the Narendra Modi government sought a three-month extension, citing the assembly elections as the reason.

If and when it comes to the crunch, the political belief is that the BJP will likely tilt towards Karnataka, where its political investments far exceed those in Tamil Nadu.

The 765-km-long Cauvery originates in Karnataka’s Kodagu district and flows through Hassan, Mandya and Mysore in the Old Mysuru region before entering Tamil Nadu. Old Mysuru has the lion's share of 65 assembly seats (out of the 224) and has traditionally seen a direct fight between the Congress and the Janata Dal-Secular. The BJP just about exists in 10 seats.

Although it has featured less in the public domain, the Goa-Karnataka fracas over portioning out the Mahadayi waters has proved as intractable as Cauvery.

The dispute, when it began in July 1980, was confined to the Malaprabha command area. Called the Naragund rebellion, the area's farmers revolted against the then chief minister R Gundu Rao's decision to collect a betterment levy without providing water from the Mahadayi.

Goa was irked by Karnataka’s move to design and construct dams, canals and barrages that would route the Mahadayi waters to the Malaprabha basin and water the parched districts of Bagalkot, Gadag, Dharwad and Belgaum in 'Bombay' Karnataka, bordering Maharashtra, to the north-west.

Goa's contentions were that its population was dependent on the river’s natural course, diversion would impair the fragile ecosystem and deprive the state of the quantum of required water.

Karnataka's point was since Goa 'allowed' the surplus water to flow into the sea, it should be channelled into the deficit Malaprabha basin.

Eventually, the Supreme Court stayed the construction of dams and canals by Karnataka and set up a water dispute tribunal that Goa sought in 2010. Goa accused Karnataka of being a bully.

The BJP found itself between a rock and a hard resting place. Soon after the BJP formed a government in Goa in 2017, the party president, Amit Shah, asked Parrikar and Karnataka CM candidate B S Yeddyurappa to 'settle' the matter.

Parrikar did not meet Yeddyurappa but in deference to Shah's directive he wrote a missive in which he stated that Goa was willing to release the Mahadayi water as long as it was used only for drinking in the drought-prone areas and not for irrigation.

As Yeddyurappa flaunted Parrikar's letter as a 'resolution', Karnataka CM Siddaramaiah asked on whose authority had Yeddyurappa 'acted' and whether he was the country’s prime minister.

Nothing more was heard of the Mahadayi issue but the BJP leaders and workers of 'Bombay' Karnataka have pressured the party to articulate their stand, failing which they may have a hard time answering people's questions. 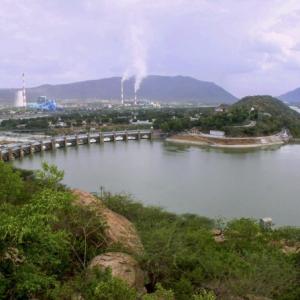