The UPA has failed over the last three years because it is in denial mode, refusing to accept that so much is rotten inside the government and the party, says Sheela Bhatt.

What is there to talk about the third anniversary of the United Progressive Alliance II?" -- that is the counter-question political commentators posed when Rediff.com asked them for their views on the government's rocky tenure.

The UPA is in power only because nobody challenges its dull and unexciting survival.

When the monthly edible oil bill for a family of four comes to Rs 500, the Congress's promise of 'government for the aam-aadmi' has to be termed as 'cheating the aam-aadmi.'

It is Dr Manmohan Singh's spectacular failure in the field of finance over the last three years that has escalated the prices of essential commodities and daily needs.

He and his team have many plausible reasons for the unusually high food prices in the bazaar, but then none in the government has enough credibility left at the end of three years to move among the people and explain to them some basic economic realities and global trends.

Eight years ago, when Congress President Sonia Gandhi, who anointed Dr Singh as prime minister, didn't transfer real authority to him, doubts were raised against such an arrangement, that it would weaken the institution of prime minister.

Those fears have come true. That political decision of 2004 now haunts the government and the party, both.

Then as now, Sonia Gandhi was looking beyond Dr Singh. So, her party took the cue and never allowed Dr Singh to grow in office.

The Congress has been waiting for Rahul Gandhi to grow, but he has encountered a cruel defeat in his very first move forward.

It is only due to the Congress's dictates that Prime Minister Singh has been absent in public life and silent on all the livewire issues of national concern. He never identified himself with any issue except the India-United States nuclear deal. Politically, he is inconsequential with an expiry date written on his face.

The free fall of the rupee, the worrying current account deficit, the government's failure in achieving development targets can be understood, even tolerated, but not Sonia Gandhi and Dr Singh's stubborn reluctance to own up issues and taking up the nation's leadership, which is nothing short of astounding.

Due to the politics between the Prime Minister's Office and 10, Janpath over the last eight years, there are no real heavyweights in the Union Cabinet. The crisis of leadership inside the government has become detrimental to the national interest.

Reporters waiting outside Parliament know well how trite Kapil Sibal, Anand Sharma or Salman Khurshid sound when they speak on serious issues. The way the government acted on the B R Ambedkar cartoon controversy shows that it is under siege and fears its own shadow.

The level of credibility of people in high office is so low that when Planning Commission Deputy Chairman Montek Singh Ahluwalia speaks sense, one finds it fishy.

Even though all four of them are highly successful individuals and have many fine things to their credit, none of them has provided strong leadership in his province or party. How can you term them 'heavyweights'?

The Congress spin-master's argument that the UPA's limitations are due to the inherent nature of coalition politics is lazy or plain dishonest.

The four most powerful Cabinet portfolios are with the Congress and for all practical purposes this is a Congress government with its allies having their say in a limited sphere of governance and some influence in policy-making.

The truth is that over the last eight years, the four most powerful Congress ministers have not emerged as a cohesive team tending to national issues. It is well known that Mukherjee and Chidambaram are adversaries working at cross purposes.

There is nothing common between Dr Singh and Antony except that both enjoy a public image of being honest. On the issue of economic management, governance, China, America, Pakistan and in matters like party politics, they differ too much to be a team.

Chidambaram's arrogance and Antony's humility have not worked well in handling many security-related issues.

However, one must distinguish one trend. It is political New Delhi's cancer that causes India pain. The rest of the country is not doing as badly. In metros like Mumbai, Kolkata, Chennai and even in non-Lutyens Delhi and in the towns and villages of India, people are busy with their struggles and want to move on.

It is South Delhi's political class that causes so much pain to India. It has failed to provide the strong leadership needed badly when the nation craves for more and more development.

The ethical quotient of the political class is so low here that it creates an air of hopelessness all over India.

Sonia Gandhi is engrossed with the Gandhi family agenda. There is a moral crisis in all the political parties as ideals have made way for pragmatism. As a result, the Congress, Bharatiya Janata Party and the regional parties have turned opportunist on the excuse of becoming accommodative.

When the Congress shows leniency in investigating the 2G spectrum scam, the nation turns to the BJP for answers. But the BJP is no different in investigating mining scams in Karnataka, where its party is in government.

Also, just watch how the Rashtriya Swayamsevak Sangh is pushing for a second-term as BJP president for Nitin Gadkari in spite of the fact that L K Advani, Arun Jaitley, Narendra Modi and Sushma Swaraj do not accept him as a leader. Gadkari cares a damn. He is in the RSS's safe hands.

Political leaders, who mismanage their party's affairs, are either entrusted with the task of running the nation, or are aspiring to run the nation as Gadkari does.

If the UPA has failed to manage the economy, the BJP has failed in the last three years to become a clear national alternative to the Congress. The RSS wants Gadkari to be a source of inspiration for a nation looking for a better alternative to the wobbling UPA. Don't take this lightly, the RSS is dead serious, as of today.

It is true that the Congress is the source of current national troubles because it is the ruling party. Still, the party is smug because, as its leaders point out, even BJP leaders are tainted and they too suffer from infighting. But the Congressmen are absolutely off the mark in their counter-arguments. The BJP's weaknesses are their only defence.

India is not the sum total of the Congress and BJP. The people want answers from the Congress on questions like: Why is the party not sensitive to price rise? Why is the government engaging in deception to avoid the Lokpal Bill? Why can't it convince foreign banks to declare the names of people who have illegally stashed their wealth abroad?

Over the last three years Congress leaders have shamelessly said that price rise is the big issue, not corruption. This argument is floated because they get so much comfort from the fact that even the BJP has tainted leaders. "Kya, BJP mein corruption nahin hain?" is their usual comment.

What a fall in the standards of national debate! What about the sea of people who are not part of the BJP? Why can't the Congress be answerable to them?

In the matter of political debates, is the Congress answerable only to the BJP, or only to those Opposition parties who they find equally or more corrupt?

Is the Congress not answerable to the people who are apolitical or highly political, but not aligned with any political party?

The UPA has failed over the last three years because it is in denial mode, refusing to accept that so much is rotten inside the government and the party. They take the rotten affairs of the government and governance as a 'national phenomenon' plaguing the country.

But the ruling class's criteria can't be the BJP or Samajwadi Party or the Bahujan Samaj Party; they have to respond to the people of India who are fighting all odds in amazing ways in spite of the failed UPA government ruling them. 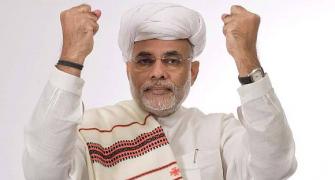 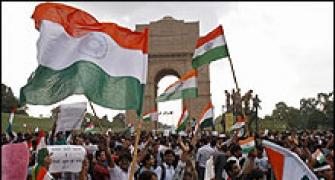 Govt gives impression of being rudderless, without energy