With Parliament's winter session set to begin on November 18, the Union home and law ministries want to complete the process of formation of the board of trustees in time, reports R Rajagopalan. 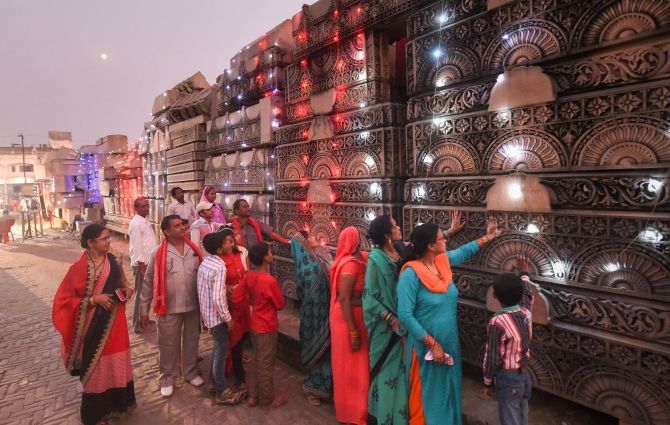 Law Minister Ravi Shankar Prasad is likely to move a Cabinet note shortly to have the Ayodhya temple trust constituted as directed by the Supreme Court. A decision is likely by the third week of November.

The apex court in its verdict on Saturday had ordered that the Ayodhya temple trust be constituted within three months.

Not wanting to waste any time, the Government of India swung into action on Monday to set the ball rolling.

The prime minister's office has decided that the Union culture ministry will be the nodal ministry for the temple's trust board, but till such time as it is constituted it will be the Union law ministry's task to identify the legal areas where the executive and political authority will prevail.

Law Minister Ravi Shankar Prasad on Monday went through the 1,045 page Ayodhya judgment, helped along by the bullet points prepared by law officers of the Supreme Court for the government's consideration.

With Parliament's winter session set to begin on November 18, the Union home and law ministries want to complete the process of formation of the board of trustees in time.

A comprehensive study will be undertaken of the establishment of trusts at the Somnath temple, Vaishnodevi temple, Puri Jagannath temple etc to study their terms and conditions and rules and regulations.

Among the decisions before the government are:

There is a prevailing view in Delhi that outgoing Chief Justice Ranjan Gogoi, who headed the 5-judge Constitution bench, should be made a trustee as well as he will have a wealth of legal advice to offer.

Meanwhile, as central government offices opened on Monday Union Home Secretary Ajay Kumar Bhalla was in touch with senior officials of the Intelligence Bureau and other central police organisations about the law and order situation in the country. The home secretary also held a video conference with chief secretaries of many states about the situation.

National Security Advisor Ajit Doval held a meeting with religious heads under the directions of Prime Minister Modi to review the post-Ayodhya verdict atmosphere. The PMO has called a meeting of secretaries on Thursday, November 14, at which a decision will be taken to brief the rest of the political leadership on the Ayodhya verdict.