Though Mohammed Hashim Ansari was the oldest litigant in the case and was against the Ram temple coming up at the site, he never spoke ill of his neighbours who were Hindus.
'Ayodhya is the best place where you can see Hindu-Muslim unity.'
'Even when the Babri Masjid was demolished, nobody harmed me.'
'The Hindus of Ayodhya helped me, but it is the outsiders who create trouble,' Ansari would say.
Rediff.com's Syed Firdaus Ashraf recalls his meetings with Hashim Ansari, who passed away on July 20. 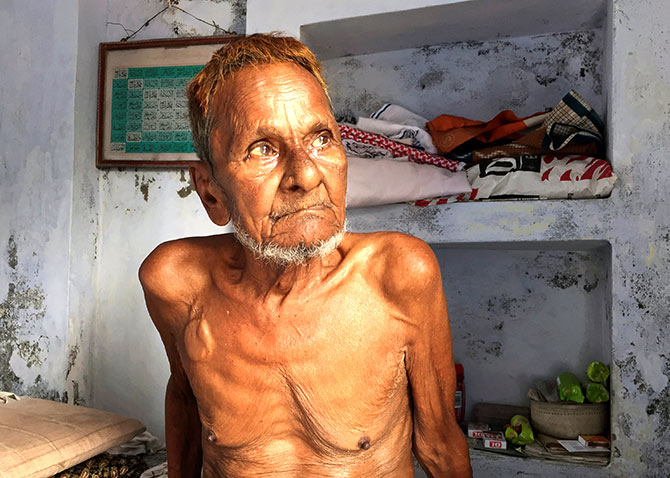 Justice delayed is justice denied may sound cliched, but for nonagenarian Mohammed Hashim Ansari, the oldest litigant in the Babri Masjid case who died on Wednesday, July 20, morning, the axiom applies to a T.

For 67 years, from 1949 to 2016, Ansari fought the case with single-minded devotion, spending his own money and appearing in different courts to argue his case.

What was his case?

"I have said a thousand times that it was (sadhu) Abhiram Das who placed Lord Ram's statue inside the Babri Masjid in 1949. The then government did not do anything because Partition had just happened and the communal situation was not very good," Ansari told me the last time we met two years ago.

"One act of mischief by Abhiram put the entire country in flames and till date no solution has been found," he said.

Ansari was convinced that no Ram temple had existed at the disputed site prior to the mosque coming up, and it was Abhiram Das' single act that sealed the Babri Masjid's fate.

He recalled how as a young boy he would pray at the Babri Masjid but all that stopped suddenly in 1949 after what Abhiram Das's "act of mischief."

I met Ansari thrice in the last 20 years and at the end of each meeting I came away with admiration for a man who never gave up his claim on the Babri Masjid. He firmly believed in the judiciary and always felt that justice would not be denied to him.

After the Allahabad high court judgment in 2010, dividing the plot on which the Babri Masjid once stood into three segments, I asked him whether he was happy with the legal outcome, and he had said, "It was a bad judgment, nobody is happy with it."

Ansari then brought out an old photograph of the Babri Masjid and pointed out, "You see, Muslims have got only one-third portion of the left side of the Babri Masjid. The Vishwa Hindu Parishad, on the other hand, got the central dome of the masjid and the Nirmohi Akhara got the right dome. This is not justice, according to me."

Ansari lived in a modest two-room house and his life was bereft of luxuries. His home had hardly any furniture and the only comfort he could offer visitors was a broken cot to sit on.

There was a steel trunk which was close to his heart, for in it were stored files of the Babri Masjid case dating back to 1949. It seemed it was the only possession that he valued.

Journalists could see him uninvited. He was always ready with the facts of the case. He used to bring in newspapers clippings, photographs and court documents to prove his claim.

Even though he was past 90 years in age, he was very sharp as far as the case was concerned.

About the 2010 judgment, Ansari told me, "You know, it is a 11,500-page verdict. It has been four years since the judgment and lawyers from all sides are still studying it. Every side has challenged the judgment in the Supreme Court."

Being the oldest litigant in the case, Ansari was also the most well-known personality in the temple town. You only had to mention his name and any child in Ayodhya would take you to his home.

In fact, it was said that there were only three famous places in Ayodhya. The Babri Masjid-Ram Janambhoomi temple, the banks of the Saryu, and Hashim Ansari's house.

Though the government had provided him 'Y' category security, he never liked it.

Many people made a political career out of the dispute -- L K Advani of Rath Yatra fame being the most well-known -- but Ansari stuck to religiously going to court and not deriving any political mileage out of or gaining financially from the case.

A policeman on his security detail once told me, "He is fighting such an important case, but he never benefited monetarily from it. Anyone else in his place would have minted money."

In 20 years I found little change in his lifestyle or attitude. Or in his doggedness to pursue the case till the very end.

Though he was against the Ram temple coming up at the site, he never spoke ill of his neighbours who were Hindus.

"Ayodhya is the best place where you can see Hindu-Muslim unity. Even when the Babri Masjid was demolished, nobody harmed me. The Hindus of Ayodhya helped me, but it is the outsiders who create trouble in the name of Lord Ram," Ansari would say.

He was disillusioned with the Bharatiya Janata Party and the Congress in the last days of his life. "I feel the Congress and BJP are one party," Ansari said. "The Congress kept Lord Ram inside the masjid while the BJP imprisoned Ram Lalla inside. He is not free. They will never let Him be free."

Ansari's final words to me were: "The government spends Rs 36 lakh (Rs 3.6 million) a day on providing security for this place. So much money is going down the drain, yet to this day there has been no final judgment on the issue." 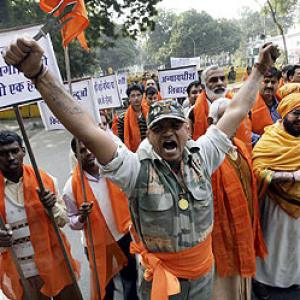