An exclusive report on how the electoral process to elect India's next President gets underway soon.

As the numbers stand today, Congress President Sonia Gandhi may not be able to spring another surprise woman candidate for President. Other women leaders will call the shots.

The formal electoral process to elect India's next President will commence on June 16 with the issue of the notification, though the Election Commission will get into its act on February 15 by requesting Rashtrapati Bhavan for permission to commence the proceedings.

The tentative date proposed for the President's election is July 19, so as to complete the entire process, including the counting of votes, by July 21, four days ahead before incumbent Pratibha Patil completes her term as India's first lady President.

Around the same time, the Election Commission will set in motion the process for the election of India's next vice-president.

Once the process for the Presidential election gets a nod from President Patil, the Election Commission will appoint Rajya Sabha Secretary General V K Agnihotri as the returning officer to conduct the election.

It is the Rajya Sabha's turn this time to conduct the Presidential election; in 2007 the responsibility was vested in the then Lok Sabha secretary general.

Agnihotri will appoint two deputy returning officers, one each from the Lok Sabha and Rajya Sabha, and write to the secretaries of the state legislatures to appoint the returning officers for conduct of the election in their respective states and Union territories.

Interestingly, Chief Election Commission S Y Quraishi will commence the process, but he will retire before the election. His successor will sign the register of the newly elected President after Agnihotri communicates the result.

The tentative calendar drawn up by the Election Commission contemplates that it will issue the notification for the election on June 16 while the last date for filing nominations will be on Saturday, June 30.

The scrutiny of nominations takes place on July 2. Withdrawals will be allowed up to July 4, a Wednesday, and polling, if necessary, will be held on July 19, a Thursday.

In case of an election, the counting of votes will be held on July 21, another Saturday.

The law contemplates the notification for election of the President at least 60 days, or as soon as convenient, before the outgoing President's term of office concludes.

The electoral college for the Presidential election constitutes the elected members of the Lok Sabha, the Rajya Sabha and the legislative assemblies of all states, including Delhi and the Union territory of Puducherry.

The nominated members of the Rajya Sabha, Lok Sabha and legislative assemblies are not eligible to vote in this election.

The election is conducted according to Article 55(3) of the Constitution by a secret ballot with the system of proportional representation by means of a single transferable vote.

The assembly election in Uttar Pradesh may determine who India's next President and vice-president will be. Up for grabs is the large chunk of votes -- 83,824 -- that Uttar Pradesh contributes to the electoral college.

As the numbers stand today, Congress President Sonia Gandhi may not be able to spring another surprise woman candidate for President. Other women leaders will call the shots --- Bengal Chief Minister Mamata Banerjee, Tamil Nadu Chief Minister J Jayalalithaa and Mayawati, if she returns to power as Uttar Pradesh chief minister. 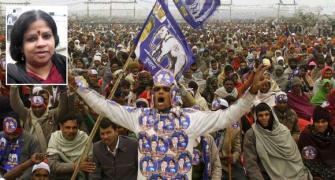 'It is likely to be a BSP-BJP government in UP' 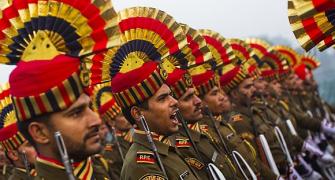 Lok Sabha to celebrate its 60 years on May 13