'We live in a time when hideous anger easily flares up, particularly on identity-related issues.'
'Often advocates of harmony and compassion fall victim to the same anger and end up hating the 'haters'!'
'This changes the moment we are able to turn the slanging match into a conversation.'
'More often than not you may find that there is agreement on a fundamental truth -- respect for the life and dignity of all.' 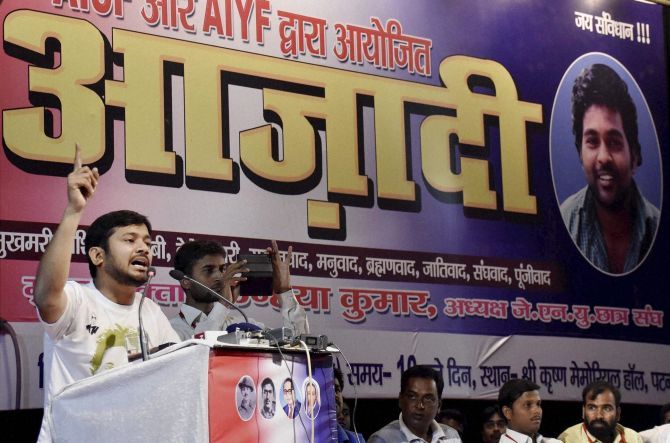 Acclaimed educationist and activist Hemlata Prabhu was the general secretary of the People's Union for Civil Liberties's Rajasthan unit from 1983 to 1997 and its president in 1997-1998.

On April 23, Rajni Bakshi, author and journalist, delivered the 5th annual Hemlata Prabhu Memorial Lecture in Jaipur. The following is a translated transcription of the lecture:

You are alive
Believe in the triumph of life
If there is a heaven anywhere bring it down to earth.

This verse conveys the resolve, the energy and faith that Hemlata Prabhu embodied.

It is the fragrance and effervescent colours of these qualities that form the essence of this gathering in Miss Prabhu's honour.

In the late 1980s and early 1990s I had the privilege of being involved in various political campaigns where Miss Prabhu was at the helm.

When Rajiv Gandhi's government gave into pressure from orthodox Muslim groups and amended the law to deny divorced Muslim women the right to claim maintenance from their ex-husbands -- we protested against this as a violation of the letter and spirit of the Indian Constitution.

When a young women named Roop Kanwar was burnt on her dead husband's pyre in the village of Deorala we protested against this crime and those who sought to glorify sati.

In 1990 as the Ram Janambhoomi campaign began to gather momentum across Rajasthan Miss Prabhu led our motley group of human rights activists in a campaign to advocate communal harmony.

But looking back I realise that the biggest gift I got from Miss Prabhu was how she defined and celebrated a term that has now become fraught with controversy -- azaadi (freedom).

I have vivid memories of the depth of feeling with which she recalled her memories of 15th August 1947: 'Ah, what a joy it was to be young and celebrate the joy of and passion for freedom!'

When she said this Miss Prabhu was not just feeling proud of liberation from British rule she was revelling in the promise of azaadi as a harbinger of a society based on equality, justice and compassion.

She inspired us to see India's Independence not as a moment in history but as a dimension of our collective consciousness -- as an ongoing resolve, as the basis for a ceaseless striving.

So what now, in 2016, is the challenge for all those who cherish this liberal resolve and are committed to living by it?

How should we live in a time of increasingly bitter polarisation -- of Hindutva versus Secular -- or at times violently competitive notions of nationalism?

Citizens for Peace, a small Mumbai-based group of which I am a trustee, have been pondering these questions for over ten years.

Our quest for answers has led us to initiate dialogues with people from diverse backgrounds -- scholars as well as activists representing religious and caste-based groups as well as different political orientations.

These interactions have taught us that direct confrontation between opposing views does not resolve conflicts. But a different and fruitful chemistry comes into play when there is a willingness to look for and listen to the concern behind our opponent's complaint.

On the face of it, this may seem absurd.

You could say that listening for the anxiety and fears behind the hate and anger that led to the murder of anti-superstition activist Narendra Dabholkar in 2013 would not have saved his life.

This seems even more starkly true in relation to the exhibitionist brutality of Islamic State of Iraq and Syria and other terrorist groups.

Yes, there do seem to be groups and individuals whose worldview and actions are driven by hatred so severe that nothing less than obliterating the 'other' will satisfy them.

But as Vinoba Bhave often said such people tend to be a miniscule minority at one far end of the spectrum of humanity.

At the opposite end are mystics and saints -- Buddha, Jesus, Kabir, Gandhi. The overwhelming majority of human beings fall in the middle of this spectrum and tend to be swayed towards either pole -- depending on the circumstances and mental climate of their times.

It is within this vast majority that listening for the concern behind the complaint can work wonders.

We live in a time when hideous anger easily flares up, particularly on identity-related issues.

This happens not just on social media and television shows designed as spectacle but within families, at work-places, among friends.

Often advocates of harmony and compassion fall victim to the same anger and end up hating the 'haters'!

This changes the moment we are able to turn the slanging match into a conversation. Our limited experience in Citizens for Peace has shown that this begins to happen the moment you ask the other person what is really bothering them, what is it that they really fear.

More often than not you may find that there is agreement on a fundamental truth -- respect for the life and dignity of all.

Even when this elementary humanism gets obscured and people in our lives seem in the grip of hatred this state may be a temporary phase. It cannot remain a permanent state if empathic listening nurtures spaces that are more inviting and healing.

Anger and hatred are draining, sapping emotions and ideologies based on them are inevitably degenerative.

The strongest way of celebrating Miss Prabhu's definition of azaadi as equality and dignity for all is to constantly remember that this way lies joy and a fulfilling life.

Rajni Bakshi is the Gandhi Peace Fellow at Gateway House. She is the author of Bazaars, Conversations and Freedom, Bapu Kuti: Journeys in Rediscovery of Gandhi among other books. 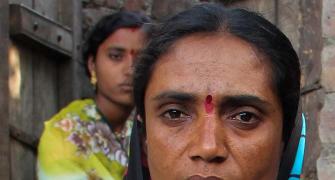