'We cannot have bodies putrefying in water.'
'This is a health hazard and it can create a very inflammatory situation.'
Rashme Sehgal reports.

IMAGE: Police personnel discovered buried bodies at Mahadev Ghat on the banks of the Ganga in Chausa village in Buxar, Bihar, May 11, 2021. Photograph: PTI Photo

Responding to a question on dead bodies, presumably COVID-19 victims, being thrown into the Ganga, Dr V K Paul, member (health), Niti Aayog had remarked, 'Spread of transmission through water is not a concern. Not to worry.'

Dr Paul, I beg to differ with your statement.

It is a matter of tremendous national concern to have hundreds of dead bodies being thrown into the Ganga which is the main source of drinking water for lakhs of people from the hills of Uttarakhand down to the Bay of Bengal. Thousands of cattle are also brought to its banks to drink water.

Dr Paul's reference was to the fact that the COVID-19 virus is not known to be transmitted through water, but again, this is an area where a great deal of research is going on in the west.

Not to be outdone, Uttar Pradesh Minister for Jal Shakti and Water Resources Mahendra Singh has washed his hands off this matter.

Striking a note of despair he said there was little his department could do 'to check the dumping of bodies in the Ganga.'

Union Jal Shakti Minister Gajendra Singh Shekhawat came up with an equally strange tweet which informed that the 'Floating bodies in Ganga in Buxar, Bihar is unfortunate. It is surely a matter of investigation. Modi government is committed to maintaining piety and continuity of mother Ganga. States concerned must take cognizance of the matter immediately.

It is obvious from the statements of these key government organisations that they have washed their hands off this matter.

Concern for the Ganga river's water getting contaminated came from the most unexpected quarter.

IMAGE: Dozens of decomposing bodies washed up on the banks of the Ganga at Chausa in Buxar, May 10, 2021. Photograph: PTI Photo

It was left to the National Mission for Clean Ganga headed by Rajiv Ranjan Mishra, who himself is recovering from COVID-19, to take some action.

Mishra sent out a letter to the chief secretaries of different states through which the Ganga flows as also to the district collectors on May 12 to take immediate steps 'for proper disposal of unidentified dead bodies/unclaimed corpses found floating in river Ganga or its tributaries in strict adherence to government guidelines on Covid 19 Dead Body Management. Appropriate funding assistance, if required, could be considered for approval by NMCG upon receipt of requests in this regard.'

'Ensure strict vigilance along length of the river within territorial jurisdiction of the district to prevent and check such future incidences of people dumping dead bodies in Ganga and its tributaries and of any other activities hazardous for river Ganga and health and hygiene of the area,' a letter to district Ganga committees further stated.

Mishra explained to this reporter, "District Ganga committees have funds available for various activities such as cleaning the river and other activities. District magistrates are presently monitoring the situation and I think it is a matter of priority for the state governments."

But there seems to be little let up in the number of bodies being thrown into the Ganga thereby creating a sense of panic amongst people living along these riparian districts especially since the river remains their source of drinking water. 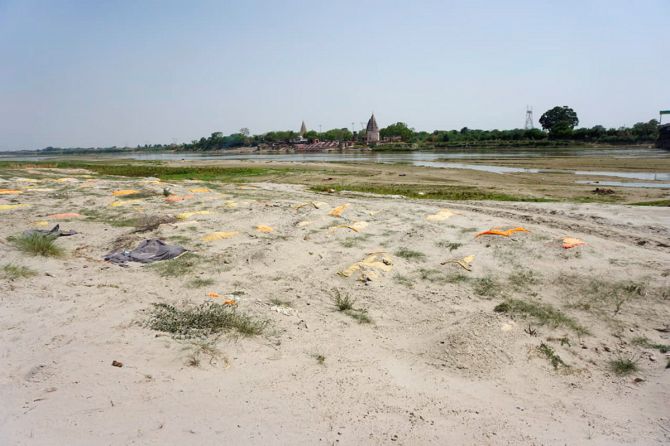 IMAGE: More than 300 bodies were found buried near the Ganga in Shivrajpur, Kanpur, Uttar Pradesh, May 14, 2021. Photograph: PTI Photo

On May 11, the Bihar government fished out 71 bodies floating in the river in Buxar district.

Another 45 bodies were seen floating at the Ujiyar, Kulhadia and Bharauli ghats in the Narahi area of Ballia district in Uttar Pradesh.

On May 10, residents in Hamirpur district spotted five bodies floating in the Yamuna, creating a scare that these were of COVID patients. The bodies were later fished out and cremated.

The local police believe that one of the reasons why the public are throwing dead bodies into the river is because they cannot afford the cost of buying wood to cremate the bodies.

Equally a matter of concern is the fact that more and more decomposed dead bodies are being found buried under the sand along the river banks.

Police authorities state that a post mortem was done of all 71 bodies found in Buxar district and DNA and Covid samples have been sent for testing.

The bodies were then disposed of as per government Covid protocols.

What is shocking is that local fishermen and villagers have been co-opted to get fish these bodies out of the water without getting them to wear any kind of protective gear.

Knowing that a large number of these could well be covid infected bodies, the district authorities should have made arrangements to make each of these individuals wear PPE kits before getting them to retrieve these decomposed bodies. 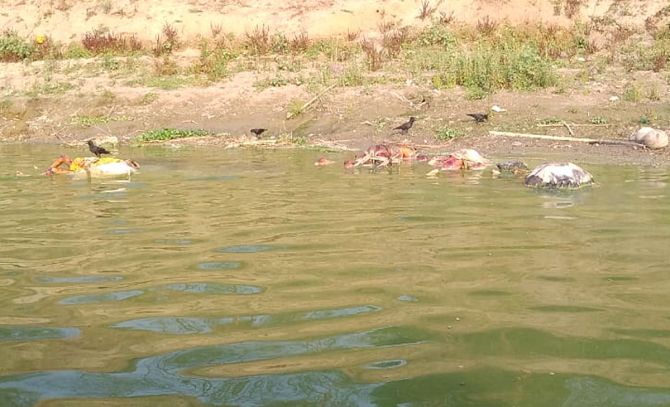 IMAGE: Dead bodies floating on the banks of the Ganga in Buxar, May 10, 2021. Photograph: ANI Photo

While the Bihar police states that the bodies may have floated in from Ghazipur in UP, UP police officials insist that since the bodies have been found in Bihar, it is the Bihar government's responsibility to investigate and take action thereby trying to absolve UP from any blame.

The UP police are trying to cover up the situation by claiming that some communities follow the practise of Jal Samadhi and dispose of dead bodies in water, but activists on the ground believe in the majority of cases people are just throwing them in the water in the middle of the night out of a sense of fear as also because they are too poor to cremate them.

The police have stepped up patrolling in the villages along the river. For the present they cannot ascertain from where the bodies have come because the majority are badly decomposed.

IMAGE: A cremation on the banks of the Ganga in Unnao, Uttar Pradesh, May 13, 2021. Photograph: PTI Photo

But the key question being is whether the coronavirus spreads through wastewater?

Scientists believe that once the novel coronavirus has found its way into the human population, it is bound to proliferate in wastewater systems.

For example, in England, Wales, and Scotland, several wastewater samples were tested, and all carried traces of the virus.

In Sydney, remnants of the virus have been detected in raw sewage too.

Research at the University of Stirling in Scotland indicates that this virus can spread through raw sewage water.

Often, in India, raw sewage is discharged into rivers and other water bodies. This could become an alarming prospect.

IMAGE: Bodies buried in the sand on the banks of the Ganga in Unnao, May 13, 2021. Photograph: PTI Photo

Dr Vikram Soni, physicist and environmental activist, points out, "There is a great deal of ongoing investigation into the transmission of this virus through sewage and wastewater. The potential role of symptomatic COVID-19 patients in transmitting the disease via the fecal-oral route is under study. It will provide valuable insights and serve as a crucial early-warning tool."

Dr Soni adds that "Contaminated river and lake water which carries human waste, sewage, and toxic waste is also known to be a breeding host of viruses. Several viruses have found their way into untreated water. The most common viruses in water are known to cause gastroenteritis, hepatitis, meningitis, fever, rash, and conjunctivitis. Contaminated water also carries Astrovirus and Torovirus, the ubiquitous causes of diarrhoea and gastroenteritis, diseases that normally strike the underprivileged."

"There is a SARS coronavirus that lives in water and can cause both respiratory and gastro disorders. Then there is Enterovirus A, popularly known as the Coxsackie A virus, and Enterovirus B, which causes meningitis," Dr Soni explains. 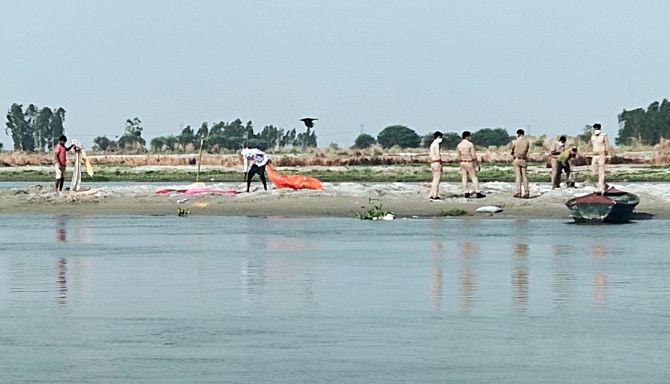 IMAGE: Bodies of suspected Covid victims found in the Ganga cremated by the district administration in Unnao, May 13, 2021. Photograph: ANI Photo

Several medical specialists warn that decomposing bodies in water can prove to be a great health hazard.

Leading virologist Dr Shahid Jameel points out that "There is little evidence that the virus is transmitted through the oral gastric route but it is a matter of great concern from the moral and humanitarian point of view."

Dr K Srinath Reddy, president, Public Health Foundation of India, believes, "The coronavirus can be excreted through stools and sometimes through urine but we do not know for long it can survive in water.'

Dr Reddy insists, "We cannot have bodies putrefying in water. This is a health hazard and it can create a very inflammatory situation."

There is little doubt that district authorities will need to exercise much more vigilance.

But the larger question is, are we as a nation prepared to deal with this slew of viruses and especially the coronavirus?

"We have not understood the nature of these viruses yet," says Dr Soni. "Appropriate intervention strategies and sanitation practices that ensure a virus-free, clean water supply are a must. Only this can check any further spread of the coronavirus and other viruses."

"We must also keep in mind that scientists have warned that newer viruses will attack us in the future due to climate change."