Will Modi sideline the VHP once again?

There are indications that the Modi dispensation was disinclined to bring the VHP into the temple-mosque frame. Radhika Ramaseshan reports. 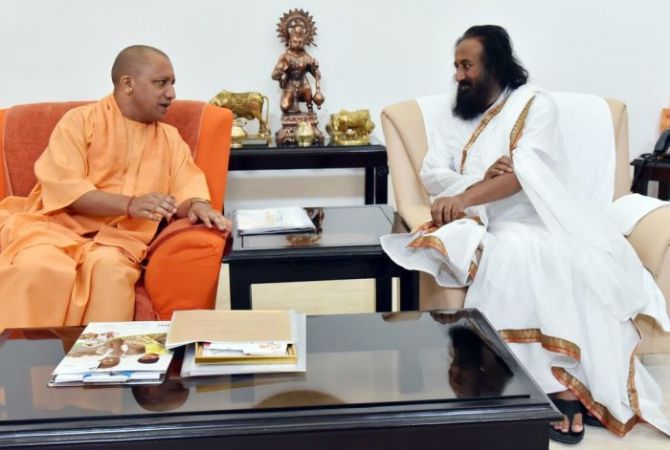 When Sri Sri Ravi Shankar, the Art of Living Foundation maker, initiated an effort to 'resolve' the Ayodhya tangle, he joined a line of past negotiators that included tantrik Chandraswami and Jayendra Saraswathi, pontiff of the Kanchi Kamakoti Peetham.

There's a difference, though.

Chandraswami and the Kanchi Shankaracharya were directly engaged by former prime ministers Narasimha Rao and Atal Bihari Vajpayee, respectively, when the Ayodhya dispute became too much of a hot potato to hold.

It's unclear if the spiritual guru from Bengaluru was empowered by the Narendra Modi government to begin talks on Ayodhya with the Shia Waqf Board earlier this year and pursue the exercise with other stakeholders.

June 2015: Some unfortunate comments (on ghar wapsi) have been made, which were totally uncalled for. Our Constitution guarantees religious freedom to every citizen and that is not negotiable.

August 2016: I get so angry at those who are in the gau rakshak business. A gau bhakt (cow devotee) is different, gau seva (cow protection) is different. I have seen that some people commit all kinds of crimes at night and wear the garb of gau rakshaks by day.

June 2017: Violence in the name of gau bhakti is antithetical to Mahatma Gandhi’s views.

July 2017: Some anti-social elements have made cow protection a medium for spreading anarchy. People involved in disturbing harmony in the country are also taking advantage of it.

A well-placed government source denied 'overt' sanction, adding, "Such developments are welcomed by us because they blunt the disruptions caused by hardliners from both sides."

An indication that the Modi dispensation was disinclined to bring the Vishwa Hindu Parishad into the temple-mosque frame.

For fear that if it did, the latter's hotheads, lately turned to other faith-related causes like a ban on cow killing and conversions, might revert to Ayodhya, re-invigorated, and trigger an unwanted crisis.

That the dynamic governing the Bharatiya Janata Party-VHP equation was changing subtly but surely was evident when Sri Sri called on Yogi Adityanath, the Uttar Pradesh chief minister, last week.

Adityanath's mentor, Avaidyanath, had helmed the Ram Janambhoomi Nyas or trust, created to oversee construction of the Ram temple on the site of the demolished Babri mosque.

Yogi participated in the temple movement as a youth and unfailingly attended every 'dharma sansad' or religious parliament the VHP convened, without being its member.

As a CM, his response on the tête-à-tête with Sri Sri was tactful but with a hint that his heart was resolutely with Hindutva proponents.

He was quoted welcoming 'efforts at any level' but took a swipe at 'one side' (read the Muslims) for 'running away from such discussion'.

Vinay Katiyar, the BJP MP known for militant advocacy of a Ram temple, said when Sri Sri met him, he 'bluntly' told him the Shia Waqf Board he was talking with had no locus standi in the Ayodhya legal cases.

"The real parties to speak to are the Sunni Waqf Board and the Babri Masjid Action Committee," said Katiyar.

He also quoted to Sri Sri the Allahabad high court ruling of October 2010 that the land which housed the mosque should be divided three ways, among the two Hindu litigants and the Sunni Waqf Board.

"I told him the board should relinquish its claim to end the problem," said Katiyar, former chief of the Bajrang Dal, the VHP's bellicose arm.

In the Modi regime, the Ayodhya developments were apparently pulling in three directions: Yogi's dual identity as a CM and a 'Hindutvawaadi', the VHP’s unwillingness to stay in business and the PM’s strategy to marginalise the VHP.

Champat Rai, its secretary general (international), said, "Today, he's not just a sadhu but the head of an important state," said Rai.

Swami Nritya Gopal Das of Ayodhya, who heads the Ram Janambhoomi Trust, was emphatic that the Modi government, Yogi and the VHP were one entity.

"We will never get a combination like this again. Modi's values are different from Vajpayee's.  This is the most opportune time to build a temple," he said.

Before the 2014 election, he built another bridge with a Hindutva constituency, independent of the VHP.

Now, he is projecting Yogi as a Hindutva icon.