By Anit Mukherjee
June 20, 2007 15:43 IST
Warrior-turned peacemaker General Indar Jit Rikhye passed away in the US on May 21. A young historian pays tribute.

As a young boy, he was blessed, and instructed, by Mahatma Gandhi to join the army.

Rabindranath Tagore offered him a scholarship to study at Shantiniketan. Zia-ul Haq (who later became one of Pakistan's military rulers) was his junior officer in the pre-independent Indian army. 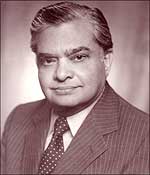 Born in July 1920 in Lahore, now a city in Pakistan, Indar Jit Rikhye was the son of a former medical officer in the British Indian Army. After he graduated from the Indian Military Academy in 1939, he was commissioned by King George VI to serve in the 6th Duke of Connaught's Own Lancers, also known as the Bengal Lancers.

Later, as a young squadron commander, he led the first armoured elements to roll into the defence of Kashmir from the 'raiders' in 1947. In the 'middle innings' of his career, as he called it, he underwent a transformation from a war-fighter to a peacemaker, serving with the United Nations in Gaza, Congo and in other parts of world. It was during this time that he first began thinking about the futility and the paradoxical inevitability of war.

This was the general I knew -- full of stories about legendary, near mythical, figures; a man with an old school charm and a peculiar 'Eastern-Western' philosophy.

I first met Major General Rikhye when I came to the United States in 2003 to get a graduate education. He was president of the Indian Veterans Organisation, IVOANA, and I was its youngest member -- a former Indian army officer with just nine years of service.

In the beginning I was slightly sceptical of the general, a notion that comes easily to most soldiers. Blame it on my perspective, but most of the generals I had met, or served under, were not exactly visionary-leaders, though they were good bureaucratic-managers, receiving and passing on orders. Moreover, I was in my early 30s, and it seemed improbable that I could strike up a friendship with man of my grandfather's generation.

But General Rikhye was a special man, and over the last few years I had the pleasure to meet him a number of times, and to speak with him often.

His formative and defining years read like a recounting of the historical events of a bygone era. He served during the Second World War in places that have assumed contemporary significance for altogether different reasons today -- Basra, Baghdad and Mosul, the Italian front...

At the time of Partition/Independence, the general was posted in a unit that went to Pakistan, and he witnessed the dismemberment of the British Indian army. Immediately afterwards, he led the first armoured squadron that was rushed to the defence of Kashmir from Pakistani raiders in 1947. Ironically, these raiders were being given logistical support from the same troops that General Rikhye was commanding as part of the undivided Indian army.

In my frequent conversations with the general about this period it was apparent that the story of the Indian army -- during the Second World War, at the turn of Independence and during Partition awaits its own historian.

Much later, after serving in a number of prestigious staff appointments in India, he was selected to serve as a military adviser to the United Nations secretary general. In this position, between 1957 and 1967, he served under Secretary General Dag Hammarskjold (before his death in a tragic air crash over Congo in 1961) and U Thant. Photograph: General Rikhye in the Gaza Strip. 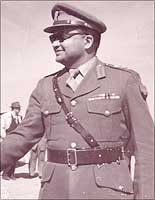 This proved to be another milestone in his life, as he transformed gradually from a war-fighter to a peacekeeper. During this period he served in numerous peacekeeping operations in the Congo, Rwanda-Burundi, Cuba (during the Missile Crisis), Yemen, Cyprus, Jordan, Dominican Republic, Sinai and the Gaza Strip.

This was the era where UN peacekeeping was seen as a panacea to stop all inter-State wars, and the idealism of the 1960s had people prophesising that that wars could be banished by combining diplomacy and inter-State cooperation.

General Rikhye brought a practical sensibility to these operations, the soldier in him saw them for what they were -- military operations in support of complicated political objectives.

More than once, some African warlord or Israeli/Egyptian commander or the Belgians in Congo had to face the general's fiery (but rare) temper on account of some bureaucratic/diplomatic/military bungling.

"I let them have it, I tell you, just told them to behave themselves", General Rikhye used to tell me with a chuckle and a glint in his eyes.

It was after resigning from the UN department of peacekeeping that he cemented his stature as a peacekeeper and diplomat by founding the International Peace Academy, a non-government institute for research and training in peacekeeping. He served as the president of this organisation till 1989 and helped conduct a number of workshops and seminars to train diplomats and soldiers.

Since his retirement, General Rikhye worked as a distinguished visiting professor at leading universities all over the globe and was also a Distinguished Fellow at the United States Institute of Peace. In his new avatar as a soldier and a scholar, he wrote a number of books on the theory and practice of peacekeeping, memoirs on his tours of duty in Congo and Sinai and an acclaimed autobiography, Trumpets and Tumults.

General Rikhye, as I got to know him better, was the romanticised epitome of soldiers from an earlier era, which admittedly, he was. He was charming, witty and had a great sense of humour -- laughing at himself and the world around him.

A brilliant public speaker, he could enthrall any audience with his endless supply of stories and anecdotes. In his private life, he was the grand patriarch of his family which consisted of two sons from an earlier marriage to Usha Rikhye, Ravi and Bhalinder, his wife, Cynthia de Haan, four grandchildren and a great grand-daughter.

So what did General Rikhye and I talk about? What did he say that merits our close attention?

Once I had overcome my scepticism of the general, he used to call me at various times of the day -- without ever imposing, and always apologetic for interrupting -- to talk about issues that concerned him, some historical, some contemporary. It helped that I was embarking on a career as a student of Indian military history and was always curious about what happened in those days.

Broadly speaking, the general had three major concerns and, in no particular order, they were -- UN peacekeeping and future conflicts, the lack of unity and generosity amongst overseas Indians, and US-India relations.

General Rikhye was angry at the way the United States went to war in Iraq. Although he was sceptical of the United Nations ever achieving anything ("We have a very bad track record, you know, and have never done robust peacekeeping well"), he believed that more could have been done diplomatically before the invasion of Iraq.

Later, as the insurgency flared, the general spoke about how a 'fire-power' intensive approach never works and mentioned about the 'Indian way of war' that emphasised diplomacy, negotiations, accommodation and a discomfort with civilian casualties.

His final belief was sobering -- unless we can figure out a way to carry out peacekeeping operations effectively; we are condemned to perpetual conflict.

General Rikhye was proud of the emergence of a strong Indian-American community within the United States and spoke highly about their work ethic and family values. However, he felt strongly about the lack of unity amongst the NRI community.

Commenting upon the ethic, religious and linguistic divides amongst the different communities from India settled abroad, the general was fond of saying how this never mattered in the military. Related to this was his disapproval of their philanthropic activities. In his opinion, they gave more for building opulent temples than for constituting scholarships and chairs of learning.

Finally, General Inder Jit Rikhye was concerned about the state of US-India relations. "The problem with both of us is that we are two proud people who both love to talk", he said, "there is no one doing the listening, and it is critical for our future to get this relationship right."

Towards the end of an eventful life, the general had dreams to start a centre for the study of US-India strategic relations. ("We have to talk, we have to remove misperceptions and we must tell the Americans what we can deliver and what we will not be a partner to"). Unfortunately, his efforts were stymied by a combination of ill health, lack of funding and bureaucratic inertia.

It is hard to imagine the wide canvas of his life, a journey that took him all over the world, meeting legendary figures and witnessing history. Despite being an international peacekeeper of repute, he was a proud patriot, and he never surrendered his Indian citizenship.