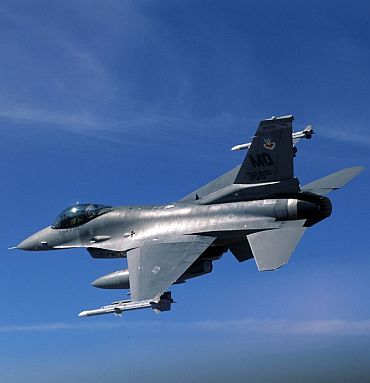 That the Obama administration, business and industry are deeply disappointed over being rejected for the multi-billion 126 Medium Multi-Role Combat Aircraft deal is a no-brainer. It is palpable.

But there was also seething anger among the senior administration officials -- at State, Commerce and the Pentagon -- and representatives of business and industry that New Delhi's decision was wholly political and much of the finger-pointing was at Defence Minister A K Antony and the Defence Research and Development Organisation.

However, none of the administration officials, business and industry representatives, including those at Boeing and Lockheed that rediff.com spoke too were willing to go on record with their disappointment and angst, and noted that beyond the notification that they had received from the Indian authorities, they were still "in a fact-gathering mode right now'.

Is that why US Ambassador Timothy Roemer quit? 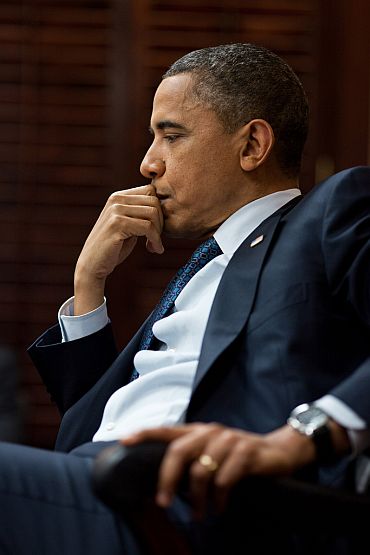 Senior diplomatic sources in Washington told rediff.com, "We are awaiting guidance from Delhi before we make any comments."

Meanwhile, speculation was rife that US Ambassador Timothy Roemer's decision to resign was a fall-out from India's decision, particularly since this was apparently one of his topmost priorities to clinch the deal in favour of the United States.

It may be noted here that US President Barack Obama had made a strong pitch in a secret letter to Prime Minister Dr Manmohan Singh making a strong case on behalf of the American defence giants, saying it would cement the Indo-US strategic partnership and be mutually beneficial in creating several thousands of jobs both in the US and India.

One administration official said, "This was always very important for everybody and one needs to take a step back and realize what was at stake here."

"We all should understand that this was far bigger than just another big defence programme. This was the alignment of two of the largest free-market democracies. That's how we had always couched it."

'MMRCA deal was pillar of the strategic partnership' 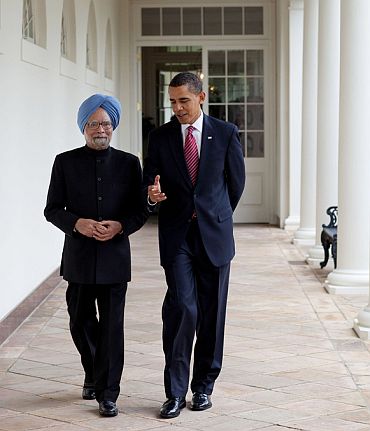 The senior State Department official said, "Given where we are with the military to military ties, counterterrorism collaboration, dialogue on regional security, I mean, everything we've talked about, where there is the logic and momentum to a deeper and strategic relationship between India and the United States. This deal was really seen as something that would go a long way towards building a strong partnership capacity with a key nation in a strategically important region of the world."

"You bet, it was being looked at as an integral pillar of the whole strategic partnership," the official added.

The official continued, "It was seen as an important pillar of the future relationship -- it was seen as a political and strategic alignment if you will, because that's what it signifies. It's a huge programme. It's a 40-year alignment of product and technology, of industrial collaboration."

Another official, pointed out, "Remember, there were only 18 aircraft, which was going to be delivered in fly-away condition. The other 108 have to be manufactured under co-production license with HAL. You are talking about a very high order of magnitude when it comes to industrial collaboration between two countries."

'It's not often that US President advocates for a deal' 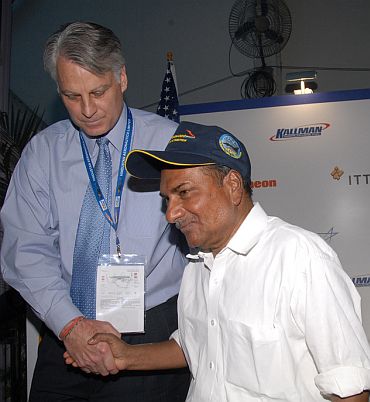 "So, it was not just the companies -- whoever was to win it -- but two countries. The forces of those two countries, sharing information and technology, know-how, capacity building, training with the Indian Air Force, all of which leads to an expanded strategic relationship."

Referring to Obama's personal letter to Dr Singh pushing for the deal, the official said, "It's not often that the President of the United States directly advocates for a key programme."

Industry sources said that both Boeing and Lockheed Martin would be requesting to receive a formal de-brief from the IAF based on the letters they had received, which they acknowledged were similar to the intimation sent to the US ambassador in Delhi.

In a statement, Roemer, acknowledging that he was "deeply disappointed," said he had been assured at the highest levels of the Indian government that the procurement process for the fighter aircraft 'has been and will be transparent and fair'.

Waiting for a debriefing from New Delhi 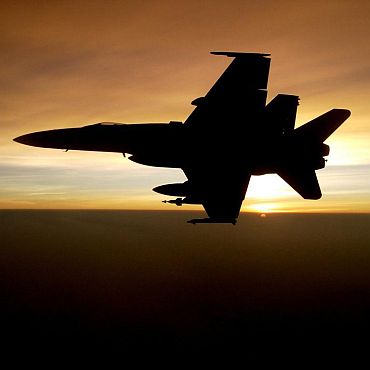 The embassy statement said it "was informed on Thursday that the two aircraft offered by the US government through the Foreign Military Sales process were not selected for procurement by the Indian Ministry of Defence."

"We are reviewing the documents received from the Government of India and are respectful of the procurement process," the statement said, but added, "We are, however, deeply disappointed by this news."

Boeing, which had its F-18 on offer, put out a statement saying that "Boeing today was notified that our Super Hornet proposal for India's MMRCA competition was not short listed in the initial down select. We are obviously disappointed with this outcome."

"Our next step is to request and receive a debrief from the Indian Air Force. Once we have reviewed the details, we will make a decision concerning our possible options, always keeping in mind the impact to the Indian Air Force," the statement said.

'An American selection would have set a new geopolitical tone' 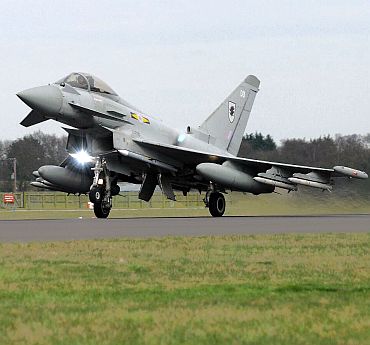 Boeing added, "We believe we offered the Indian Air Force a fully compliant and best-value multi-role aircraft for the defined mission. We will continue to look for opportunities to help India modernise its armed services and enhance its aerospace industry."

Lockheed, which was hoping that India would pick its F-16 fighter aircraft, had not put out a statement at the time of going to press.

India apparently had short-listed the Eurofighter and the French Rafale as the leading contenders for the deal.

A senior Pentagon official, who recently visited Delhi and met with senior Defence Ministry officials, including Minister Antony and the IAF leadership, told rediff.com: "We have always said that an American selection would have dramatically transformed the strategic relationship for generations to come."

"I mean that's what you talk about. You talk about the deeper and the more meaningful industrial and technology collaboration between the two industries. It would have set a new tone for the geopolitical future for the next 40 years."

Why the US as a whole is dismayed 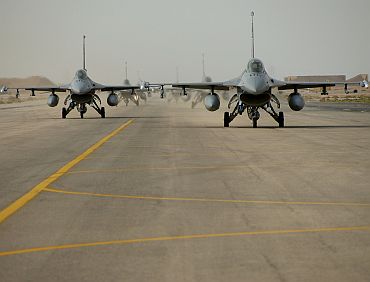 The official acknowledged, "We always recognised that yes, you always have the technology decisions, but the political decision was always going to be a major function of this."

"It was always going to come down to a major political decision. That's where the United States as a whole -- not just the US government -- is somewhat dismayed and obviously disappointed with this outcome. Because we truly believed that we had the two best aircraft in the competition, in terms of what is proven, what is operationally there and the level of technology."

This official asserted, "The level of the technology, which was blessed by us from an export control standpoint, is something we provide only to our closest allies. We had gone through a lot of pushing and pulling in our system to get that level of technology blessed. The people in India must realise that that took a lot." 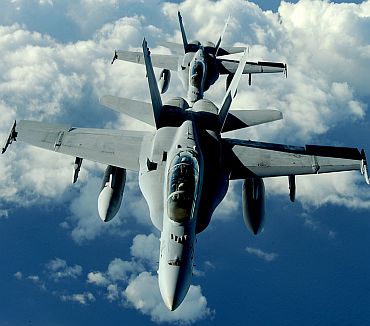 An industry source just couldn't stop talking about the superiority of the American aircraft, and obviously was totally dejected over the Indian rejection and was finding it difficult to accept it.

"After all," he said, "what were we so proud of? We are proud of the fact that what we had offered to the Indian government were two of the most advanced multi-mission combat aircraft in the world. These aircraft, more than anything else, by the way, have demonstrated military advantage over any current fourth-generation aircraft which was in the MMRCA competition, without any of the risks of technology that's not fully developed or even on the drawing board stage."

The source said, "Let's face it, even some of the other aircraft, even the ones that are selected, having any sort of AESA (Active Electronically Scanned Array) radar, which are still in the drawing board stage."

"Our aircraft have an operational and capable AESA radar that has been flying for the last several years, It's the most advanced technology out there today and its these most proven -- operationally proven, combat proven, and that's the most important thing -- aircraft in the world."