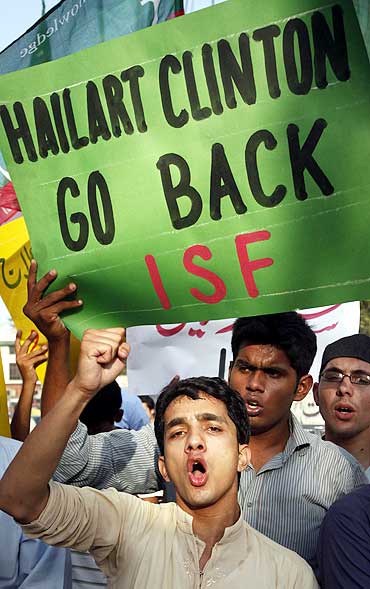 Image: Supporters of Tehreek-e-Insaf hold placards as they shout anti-American slogans during a protest rally against the visit of US Secretary of State Hillary Clinton in Lahore on Friday
Photographs: Mohsin Raza/Reuters Lalit K Jha in Washington, DC

United States Secretary of State Hillary Clinton received a cool welcome in Pakistan on her recent trip, mainstream American media reported on Saturday adding this is reflection of the low-ebb in relationship between the two countries.

"The tension was clear at the start of the first meeting of the day, with Pakistan President Asif Ali Zardari. There were few of the smiles and warm handshakes that usually open such sitdowns, and reporters were soon shooed out of the room," The Wall Street Journal reported.

The daily said her message was greeted coolly in a country that was angered by the bin Laden raid and sees itself as stretched to the limit in fighting extremists that have sown terror within Pakistan. 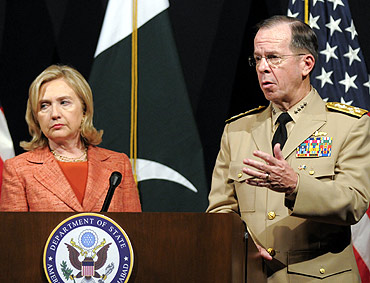 Image: US Admiral Mike Mullen Chairman of the Joint Chiefs of Staff speaks during a joint news conference with Secretary of State Hillary Clinton, at the US embassy in Islamabad
Photographs: Reuters

"Mrs Clinton was joined in a tense, daylong sweep through Islamabad by Adm Mike Mullen, chairman of the Joint Chiefs of Staff," it said.

Clinton and Mullen are the most senior American officials to visit Pakistan since the killing of Osama bin Laden at a compound in Abbottabad.

Clinton, who was travelling in Europe earlier this week, decided to make the trip only after Pakistan acceded to a list of demands that included allowing CIA access to bin Laden's residential compound in Abbottabad, 'The Washington Post' reported.

"Television video taken at the beginning of the session indicated a grim atmosphere and none of the usual pleasantries of diplomatic gatherings. Administration officials later denied there was tension," the daily said. 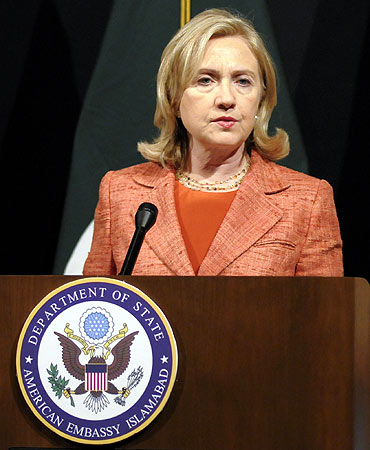 Image: US Secretary of State Hillary Clinton speaks during a news conference at the US embassy in Islamabad
Photographs: Reuters

"But administration officials travelling with Clinton said that the seriousness of the current crisis had forced both sides to confront the possible consequences of an irreconcilable breach and that the talks were marked by a new level of frankness," said The Washington Post.

"At the presidential palace, a grim-faced Clinton was heard repeating what she said was President Obama's 'strong support' for the relationship and US' commitment to working with and support for Pakistan, and the recognition of the sacrifice that is made by your country" in fighting terrorism," The Boston Globe reported.

Meanwhile, Secretary Clinton's spokesman Mark Toner later 'clarified' to mediapersons in Washington, DC that US has not given a 'clean chit' to Inter Services Intelligence over Osama bin Laden's presence in Pakistan.