Sign in  |  Create a Rediffmail account
Rediff.com  » News » The cult of Scientology: A religion or a deception?

The cult of Scientology: A religion or a deception? 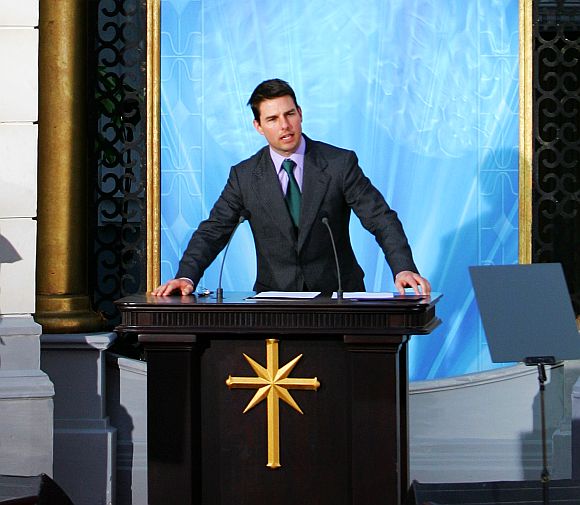 Image: Tom Cruise delivers a speech at the opening of a Scientology church in Madrid
Photographs: Paul Hanna/Reuters

What is Scientology, and why is it so controversial? Rediff.com tries to find out.

The not-so-glittery news of the split between Hollywood stars Tom Cruise and Katie Holmes not only sent shockwaves across the world last month, but also shifted the global focus back on the cult of Scientology, and the innumerable controversies surrounding the 'religion'.

A US Weekly report stated that prior to Katie Holmes' June 28 divorce filling, "she and Tom Cruise fought viciously over how to raise their six-year-old daughter Suri -- and the 33-year-old actress bristled at the bizarre tenets behind Scientology parenting."

The report also stated that the Batman Begins starlet objected to Suri being fed with "a mixture of barley water, milk and corn syrup as an infant instead of breast milk." She also could not agree to Scientology's greatest poster boy's plan to home-school his children, as prescribed by Scientology founder L Ron Hubbard. Tom Cruise has, however, denied Scientology being a factor behind the split.

In the meanwhile, the Church of Scientology has been trying its best to prevent adverse media coverage it has gained from the development.

As news comes in of a settlement in the Tom Cruise-Katie Holmes divorce case, it has, nevertheless, posed another question mark over Scientology. So, what is Scientology, and why is it so controversial? 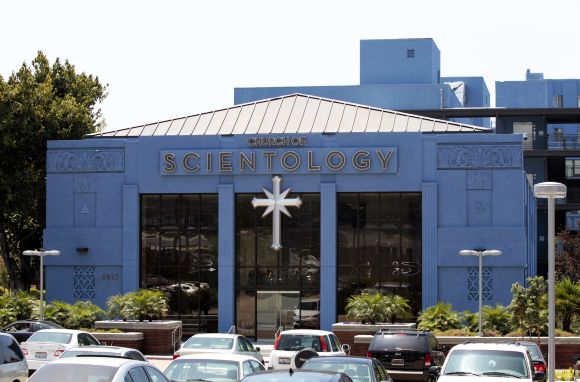 Image: Cars are parked outside the Church of Scientology in Los Angeles
Photographs: Mario Anzuoni/Reuters

American pulp fiction author L Ron Hubbard founded 'Scientology', a body of beliefs and related practices, as successor to his previous self-help system called Dianetics. He charecterised Scientology as a religion and in 1953 founded the Church of Scientology in Camden, New Jersey, US.

Scientology teaches that people are immortal beings who have forgotten their true nature. Its method of spiritual rehabilitation is a type of counselling known as 'auditing', in which practitioners aim to consciously re-experience painful or traumatic events in their past in order to free themselves of their limiting effects.

Followers and new entrants can get "Scientology study materials and audition courses" often after paying heavy donations. At the same time, Scientology is also a known sponsor of certain social-service programmes.

Although Scientology is legally recognised as a tax-exempt religion in the United States, it has not received a religious status in other countries like France, Germany, United Kingdom and Canada.

What does Scientologists believe and practice? 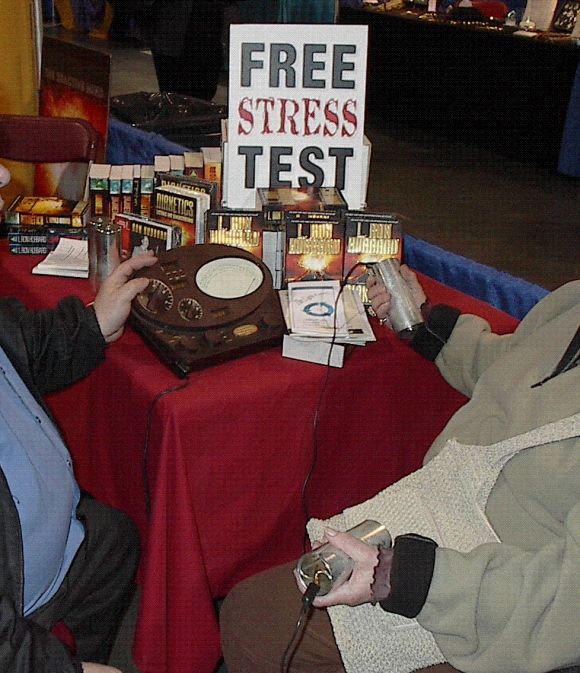 One purpose of Scientology, as stated by the Church of Scientology, is to become certain of one's spiritual existence and one's relationship to God, or the "Supreme Being."

Another belief is that a human is an immortal alien, i.e. extraterrestrial, spiritual being, termed a 'thetan' that is trapped on Earth in a physical body.

Scientologists are taught that a series of events, or incidents, occurred before life on earth. Scientologists also believe that humans have hidden abilities which can be unlocked. In Scientology, rationality also is stressed over morality.

Scientologists also use a device called the 'E-meter' during the one-on-one 'auditing' process, where the 'auditor' measures minute changes in electrical resistance through the body when a person holds electrodes, and a small current is passed through them. Scientology asserts that watching for changes in the E-meter's display helps locate 'engrams'.Once an area of concern has been identified, the auditor asks the individual specific questions about it, in order to help him or her eliminate the 'engram'.

The Church of Scientology holds that at the higher levels of initiation, mystical teachings are imparted that may be harmful to unprepared readers. These teachings are kept secret from members who have not reached these levels.

In Scientology, defectors who turn into critics of the movement are declared suppressive persons,and the Church of Scientology has a reputation for moving aggressively against such detractors.

Is Scientology a religion? 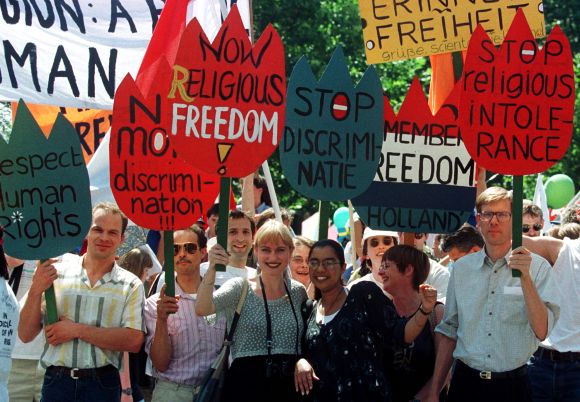 Image: Members of the Church of Scientology hold placards during a demonstration in Frankfurt
Photographs: Kai Pfaffenbach/Reuters

In 1952, Hubbard published a new set of teachings as Scientology, a religious philosophy, and consequently in December 1953, found the Church of Scientology. The movement quickly spread into other parts of United States and made its way to English-speaking countries like UK, Ireland and Australia.

Overtaking widespread criticism, Hubbard championed the theory of 'existence of thetan', a concept similar to 'soul', which made way for Scientology's transition from a scientific subject to a religion.

In 1957, the Church of Scientology of California was granted tax-exempt status by the United States Internal Revenue Service, and so, for a time, were other local churches. However, in 1967, the IRS removed Scientology's tax-exempt status, asserting that its activities were commercial and operated for the benefit of Hubbard, rather than for charitable or religious purposes.The decision resulted in a process of litigation that would be settled in the Church's favour a quarter of a century later.

As such, in December 1993, the Church of Scientology experienced a major breakthrough in its ongoing legal battles when the IRS granted full tax exemption to all Scientology churches, missions and organisations, which became another step forward in Scientology's claim to religious identity.

Today Scientology has gained religious status in countries including US, Sweden, Spain, Portugal, Slovenia and Taiwan among others, but has not been recognised in France, UK, Canada, Germany and Belgium. 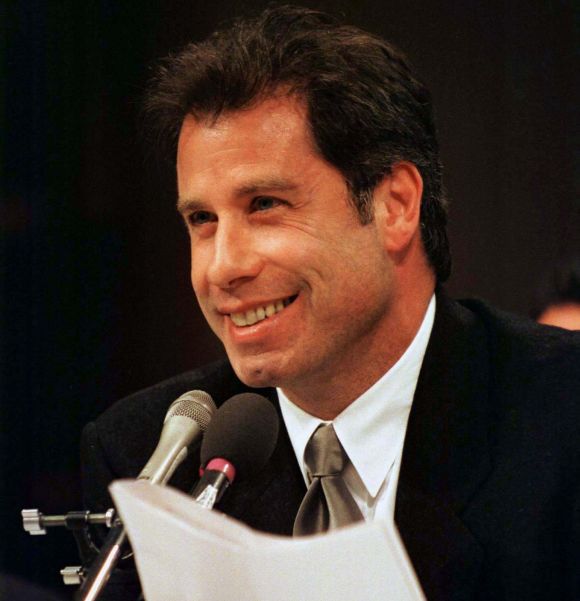 There has been confusion over the total number of Scientologists in the world. While the Church of Scientology claims that its worldwide membership to be 8 million, many surveys have indicated that the number of American Scientologists have dropped to as low as 25 thousand.

Scientologists tend to disparage general religious surveys on the grounds that many members maintaining cultural and social ties to other religious groups will, when asked about their religion, answer with their traditional and more socially acceptable affiliation.

However, apart from Tom Cruise, many American celebrities are known Scientologists like actors John Travolta, Kirstie Alley and Jason Lee who have generated considerable publicity for Scientology.

Why is it so controversial? 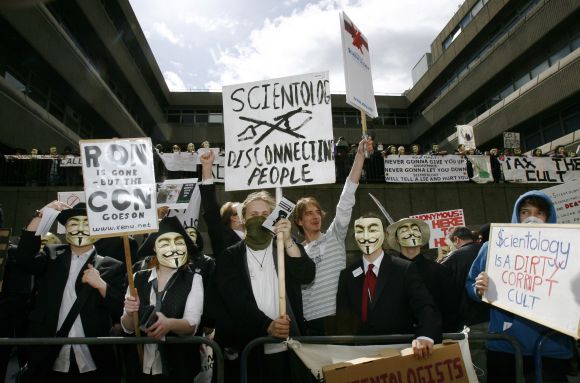 Image: Protesters hailing from a group named 'Anonymous' demonstrate outside the Church of Scientology in London
Photographs: Luke MacGregor/Reuters

Arguably, the Church of Scientology has been one of the most controversial religious movements in the 20th century. It has often been described as a cult that financially defrauds and abuses its members, charging exorbitant fees for its spiritual services. It has been one of the most litigious religious movements in history, filing countless lawsuits against governments, organisations and individuals.

The aggressive legal stands that the Church of Scientology often takes against critics and detractors have been condemned as harassment by many.

A 1991 Time magazine article described Scientology as "a hugely profitable global racket that survives by intimidating members and critics in a Mafia-like manner."

Another controversial belief held by Scientologists is that the practice of psychiatry is destructive and abusive and must be abolished.

The use of 'E-meters' have also sparked widespread criticism and has been regarded as 'illegal medical devices.' They can now be used only with a 'strictly religious device' disclaimer.

Many pro-freedom groups have rigorously protested against Scientology organisations' efforts to censor the Internet in a bid to safeguard confidential material making its way to the public domain. 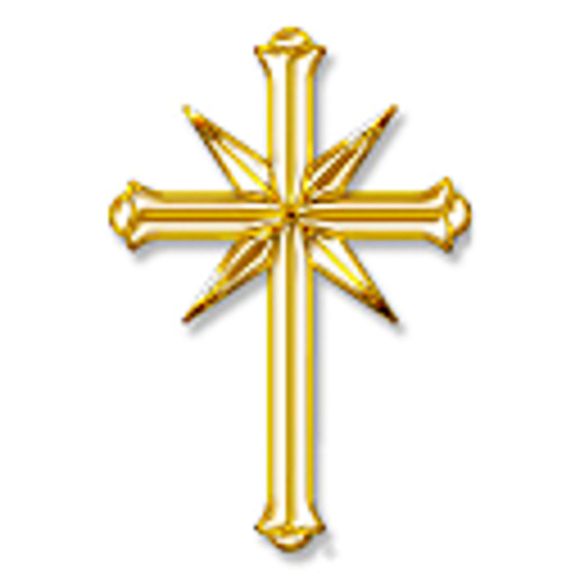 Image: The Cross of Scientology

It's certain that Scientology is making its inroads to India, where around seven thousand people are said to be attracted towards the religious movement.

The Scientology centre in New Delhi has already catered to the psychological and spiritual needs of many Indians through Scientology charging Rs 3,000 to Rs, 5,000, as written by Joanna Sudgen in the Wall Street Journal.

However, Scientologists believe that there faith is still highly misunderstood in India, and has a long way to go.