Humayun lies in wait for Obama 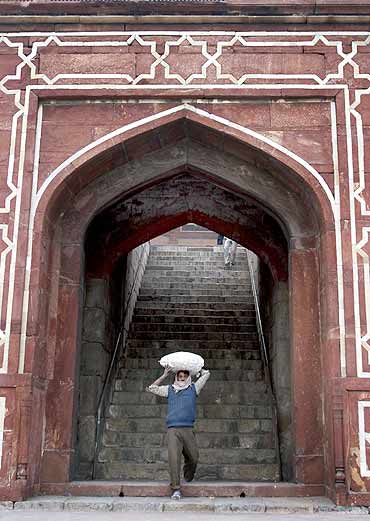 Image: Humayun's Tomb when restoration work was on at the world heritage site in December 2006
Photographs: Anuruddha Lokuhapuarachchi/Reuters
Barack Obama's staff could not have chosen a better venue than Humayun's Tomb for his only cultural outing in the capital, says Archana Masih.

In a city as historic as Delhi -- one that writer William Dalrymple notes can only be rivalled by Rome, Istanbul and Cairo for its historic remains -- Barack Obama would be spoilt for choice.

But his staff (who lose points for scheduling his arrival in India on Diwali day!) could not have chosen a better venue for his only cultural outing in the capital.

Obama will visit the mausoleum of the first Mughal Emperor to be buried in India -- Humayun. (Though Babar, the first Mughal, was buried in Agra, his body was later escorted to Kabul where he rests today as he had wished. According to Bamber Gascoigne's book The Great Mughals, Babar never wanted a roof over his tomb. But some modern civil servant thought it necessary to protect the marble monument with a ludicrous superstructure resembling an expensive bus stop.)

Thankfully, India's cultural department did not commit any such assault on Humayun and the tomb remains one of Delhi's most loved and well looked after monuments.

In a city with the most number of Mughal monuments, Humayun's final resting place stands out for its sheer magnificence and its wonderful restoration work, funded by the Aga Khan Foundation's ample generosity.

Its leafy enclave in the heart of the city will be the best place for Obama to spend Sunday evening.

A world heritage site, the tomb is significant not only because it was built 60 years before -- and was the precursor to -- the Taj Mahal, but also because of its connection to the last of the Mughal emperors.

It was here that Bahadur Shah Zafar -- the last emperor of the dynasty that ruled India for over 332 years -- sought refuge when Delhi fell to the English after a six-month siege following the Uprising of 1857.

From there he was taken prisoner to the Red Fort to stand trial for treason before finally leaving his beloved Delhi on a bullock cart in the darkness of the night to start his exile in Rangoon.

Dalrymple has told Zafar's story brilliantly in The Last Mughal, where he mentions Frances Pritchett's observation that Humayun's Tomb was the first great monumental tomb the Mughals built and was the most magnificent monument in Delhi.

Flanked by Babar, who laid the foundation of the empire, and Akbar, who took it to its zenith, history remembers Humayun as the weakest of the Six Great Mughals who ruled Hindustan.

He inherited a kingdom four years after his father captured it, lost it almost in its entirety to the brilliant general Sher Shah Suri, only to win it back 15 years later. But as Gascoigne puts it, 'with his air of civilised lethargy, excessive superstition, sentimentality, lack of self-confidence, he gave the impression of a man who was childish but endearing not perhaps the best qualifications for an emperor.'

Perhaps not so in death, because while Akbar's tomb in Agra is overshadowed by the breathtaking Taj Mahal, Humayun's mausoleum remains the grandest of all resting places built by any Mughal queen for her husband. (Though Shah Jahan also is buried in the Taj Mahal, he originally built it for his queen Mumtaz Mahal.)

Humayun, who unfortunately died when his foot was caught in his robe and he fell down the staircase of his library, is also the only Mughal emperor to be buried in Delhi, the Mughal capital for over 200 years. His wife Hamida Begum built the tomb, which has over 100 Mughal graves, in 1565.

It is hard to imagine that a decade ago the gardens in the tomb complex were in serious need of restoration. The Aga Khan Trust, spearheading the ongoing restoration work, has done a commendable job in reviving the gardens.

According to its Web site, large shade trees like Mango and Neem were planted and over 300 plants of lemon and orange -- said to have been favoured by Humayun -- were planted along the outer pathways.

In a country where our monuments abound with lover's graffiti, Humayun's Tomb is a marvel that has been reclaimed.

It has provoked our interest because of what would be the first visit by an American President to the site. There have been countless articles on it since the White House announced Obama's itinerary; the main gate leading to the tomb is getting a fresh coat of paint and the staff are working overtime to spruce it.

Please click the Next button to read Sahim Salim's feature on how the magnificient monument came to be chosen for the Obama visit.

Why Humayun's Tomb was chosen 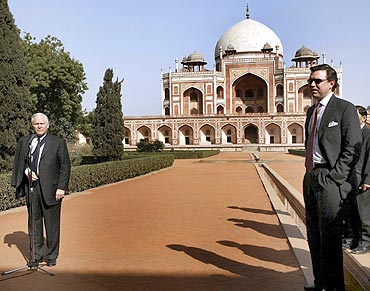 Image: US Defense Secretary Robert Gates, left, at Humayun's Tomb, February 26, 2008
Photographs: Mark Wilson/Reuters
Sahim Salim gets the inside story on how Humayun's Tomb became the chosen monument for the Obama visit.

Instead of travelling 204 kilometres from New Delhi to the Taj Mahal in Agra, President Barack Obama will visit its precursor, the 16th century Humayun's Tomb in the heart of the capital.

It could not have been timed better. The Archaeological Survey of India and the Aga Khan Trust for Culture have just finished restoring the five-centuries-old water channels of the chahar-bagh (a four-part paradise garden) surrounding the tomb.

"The only change we have made is that electric pumps are being used to circulate water. In its original plan, it used to run with the aid of a Persian wheel," says Superintending Archaeologist Muhammed K K.

He said there are no special plans to receive Obama, who will be the first US president to visit the red and white garden structure. The couple is expected to visit the monument around 4 pm.

"Normally, dignitaries are received by superintending archaeologists, but this time a general secretary-level officer will receive them," says a senior ASI official who did not wish to be named for this feature.

Muhammed says the Obamas will be received outside the monument and taken to the Aga Khan Trust for Culture's office inside the complex.

"Since they (Aga Khan Trust officials) have been associated with the monument for a long time, they will be giving the dignitaries a tour of the structure. The VVIP guests are expected to be inside the structure for about 45 minutes," adds Muhammed.

The Obamas will be taken for a walk in the gardens surrounding the structure, before being taken to the tomb. They will be treated to a fully-lit view of the monument, which is normally conducted only after sunset.

The tomb, one of the three world heritage sites in New Delhi, was chosen over the Red Fort and Qutub Minar because of its secure location and architecture.

A senior ASI official points out: "The monument is a complete structure and excels over the other two in terms of restoration, maintenance and originality. In addition, the structure can be secured from all four sides and it got the final nod from US security personnel because of this."

"American officials in Delhi are familiar with the monument," he adds, "because the US embassy is co-funding an English education programme for 200 slum children around the tomb and the conservation of the Sunderwala Burj."

The monument has had its share of visiting dignitaries lately. German Foreign Minister Guido Westerwelle visited the site in October as did German President Horst Kohler during his visit to India.

"Important ministers or heads of State from Turkey, Syria, Kyrgyzstan and Canada have visited the monument," says Muhammed.

"It is a beautiful monument and is finally getting the attention it deserves," he adds. "Most dignitaries are taken to either the Qutub Minar or the Red Fort; only a chosen few get to visit this monument."

The monument will turn into a virtual fortress for the visit, with multi-layered security arrangements. Private security guards, gardeners, sweepers and artisans at the structure will be given a day off. Only senior officers of the ASI and the Aga Khan Trust will be allowed inside the monument.

The structure will be off-limits for the public as American and Indian security agencies seal off the venue on November 7.

Sources said American security personnel have conducted a survey of the structure, looking for security loopholes.

"They were satisfied with the arrangements," says an ASI official.