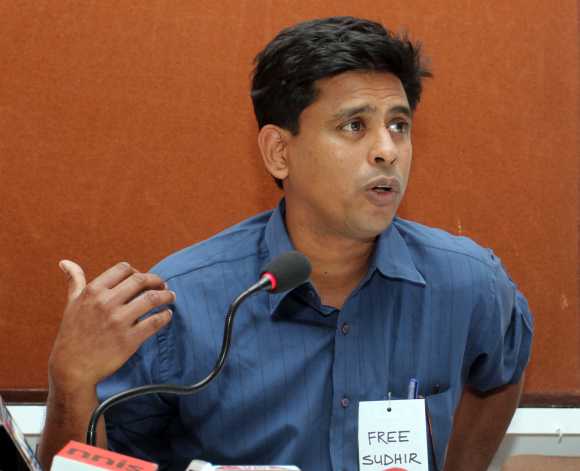 Branded a Maoist by the Maharashtra police, Arun Ferreira was released on bail on January 5.

At his first press conference after his release, he spoke about his ordeal and how the State has been muffling the voice of dissent. Prasanna D Zore reports.

The sarcasm in 40-year-old Arun Ferreira's voice is not completely misplaced.

It comes naturally to somebody who has been branded a Maoist/Naxalite and tortured in jail -- slapped, kicked and made to stretch.

It comes naturally to somebody who has been fighting the system and pleading his innocence.

It comes naturally to somebody who breathes fresh air after having spent more than 50 months in jail and was then acquitted by various courts in ten out of 11 cases.

It comes naturally to somebody who is pouring his heart out about his ordeal in prison, his release from prison after the court's order in September 2011 and immediate 'abduction by the police' in Nagpur, and somebody who has seen the system work against the innocents.

Arun Ferreira, a native of Bandra, the upmarket northwest Mumbai suburb, was first arrested from Nagpur on May 8, 2007 under the Unlawful Activities and Prevention Act for his alleged links with the Maoists.

At his first press conference after his release on bail on January 5, he answered questions that were asked to him by friends and family ever since his release.


Photographs: Uttam Ghosh/Rediff.com
Arun Ferreira, an alumnus of Mumbai's prestigious St Xavier's College, on what life in prison is like:

Prisons in India still have the old British-type system running even now.

I was first placed in a cell called 'Anda Barrack.' There is an Andabar cell in the Arthur Road jail as well as many other jails in India. It is supposed to be a high security cell and I could not meet anybody but my co-accused for one year.

So the government, which has supposedly banned solitary confinement 20 years ago, is continuing it, using another name.

The prison manual in jail out there doesn't work. So, ultimately it is the jailer who decides; it's his manmani (discretion).

As per this 1894 prison manual accused can get only one letter per month. That was practical 10 years ago; now you can get many more, but the jailer decides that.

And if you dare to talk about the jailor's corruption, or corruption in jail he will come the next day and say 'Take care you are not supposed to write more than one letter in a month. You will get such dhamkis (warnings) as you call it (smiles wryly).

The other thing I'd like to tell about prisons with regards to the 2G accused is that 'Jail is a great equaliser.' I think that is a big fallacy.

The hierarchies that remain in society exist in jail also: Whether it is class, caste or money. I have seen it.

In jail if you have money you will get a good place to sleep.

In my experience in jails too money calls the shots.

'The trial is going on, witnesses are being examined but the accused is kept in jail'

Undertrial prisoners arrested as 'Naxals' face two problems. One, since January 2010 till now they have not been produced before the Gadchiroli Sessions court at all.

You will not find this practice anywhere in the state, but in Gadchiroli it is happening. Why? Because the police is required for the Naxal Virodhi Abhiyaan (a campaign against the Naxalites in Gadchiroli, the district where the Maharashtra government is in almost daily confrontation against the leftwing rebels).

So the situation is from January 2010 till now no court production (of the accused) has taken place. So the trial is going on, witnesses are being examined, but the accused is kept in jail. He is not allowed to go to court (for want of enough policemen as escort).

If the same situation were to happen in Mumbai there would have been a big hungama (ruckus) by now. But this is in some corner of Gadchiroli and nobody takes (bothers to) care of (look into) it.

This is the sort of free (and fair) trial that many of the Adivasis (mostly arrested as Naxalite supporters) have to face there (in Gadchiroli).

The second problem I'd like to focus on is the question of re-arrest.

This problem is not something that has started from my case. From the time since I have been in jail in May 2007 this has been a recurring event.

In September 2007, Mallesh came out of the gates, was abducted, taken for six months in Nagpur jail.

He got released in April 2008, but he was again picked up at the gate and in similar fashion sent back, this time, to Bhandara jail.

Later he was released from Bhandara jail, but yet again he was picked up and sent to Balaghat jail.

This is the rule of law (in this country).

The point I am making is not whether he is a Naxal or a terrorist or whatever, but if the courts have ordered somebody to be acquitted or released on bail then it is the rule of law that says that he should be released. But the police are not following this procedure. This is in Mallesh's case.

Ever since that whenever the issue of re-arrest took place we in jail went on a hunger strike for 27 days. I don't know if you remember this, but the honourable home minister had asked the police to hold an inquiry about the issues that we brought forth during our hunger strike.

The police department did an inquiry. But it was about the cases framed against us. The outcome of this inquiry was that the police suggested that all those who participated in the hunger strike should be distributed in various jails. This is how they solved the problem.

The Principal Judge, Gadchiroli, on the police modus operandi

While we in jail and the lawyers fighting for us have been commenting against these re-arrests there is something that the principal district judge of Gadchiroli -- and let me tell you that the principal district judge is the chief judicial authority in the district of Gadchiroli, somebody who supervises over the entire court functioning in a district -- has commented on the modus operandi of the police of re-arresting people.

This quote is from one of his judgments in the case of Ganpat Kulmethe (Vishwanath Ganpath Kulmethe). His petition at the time is pending in the (Nagpur bench of the Mumbai) high court. This is what the judge says:

It is noticed that it has become the modus operandi of the Police to involve any person branding him as a Naxalite. If any person is a resident of that locality and if there are certain incident, the persons from the area are implicated. The accused Vishwanath is the accused before me in a number of cases and it is noticed that that as and when he is acquitted in one case he is implicated in another case with intent to languish him in jail. That is the tragedy.'

'Be that as it may, when there is no evidence, even slightest against the accused to prove the charges, the accused has to be acquitted...

This was said by the principal district judge of Gadchiroli.

In May when I was picked up I think all of you must have seen my five-year old photo. That face and this face is a vast difference.

Actually, when I saw the photo in the newspapers I could not recognise myself. One side of mine was totally swollen. I was physically tortured, slapped, kicked, made to do stretching.

Petrol was inserted into the rectum of my co-accused.

What I feel is that the State has learnt the technique of how to make the person suffer and not show marks.

I remember when I was being tortured I heard two or three police officers talking. One cop told me that if you put your leg in that manner it would break. He knew that if my leg were bent slightly in a particular way it would break. I was thinking this is the guy who is torturing me and yet caring for me.

Actually he was not caring for me. He was thinking that if my leg breaks and I complain about it in the court, (smiles) he will... (face action).

They have learnt the technique of how my body should be positioned, how I should be tortured, which place I should be hit so the marks don't show and they will have their work done.