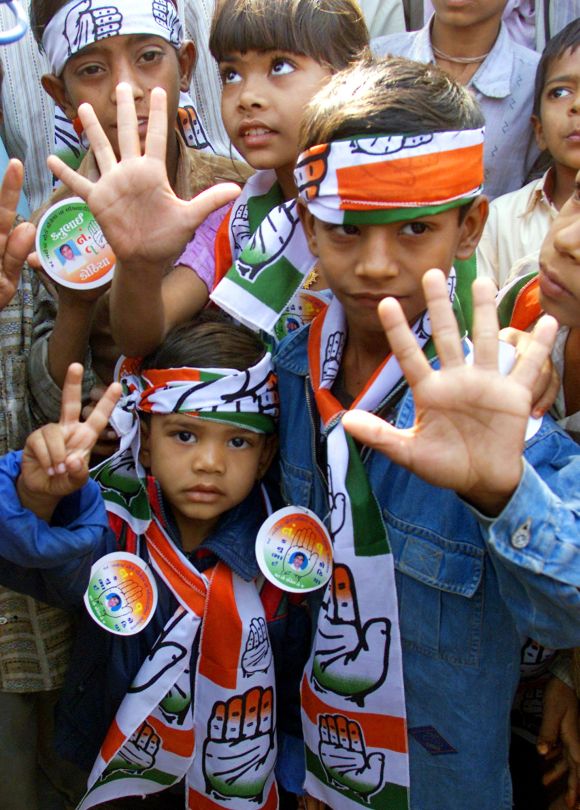 Rediff.com launches its coverage of the coming electoral battle for Gujarat with a series of exclusive interviews.

This week: The second part of the interview with Achyut Yagnik, the Ahmedabad-based social activist, writer and political analyst, in which he discusses the electoral winds in Gujarat, with Sheela Bhatt.

Don't Miss-Part 1: Understanding Gujarat: Why the Patels won't be decisive

How do you see the Congress party's position in Gujarat?

The party structure of the Congress has been weak since the last two decades. The Bharatiya Janata Party is not functioning merely as a political party. The BJP is always functioning as the Sangh Parivar. But you won't find that kind of Parivar formation within the Congress in any state. That is the one huge difference between the two.

If compared with the early years, there is no doubt that during the last one year the Congress has become proactive. The Congress leadership is contacting people and talking about all sorts of programmes. But the party's presence in the interiors is the real issue.

In Gujarat, the tribals are as important as the Patels. Their strength is the same, at 14-15 percent. The Congress's presence among the tribals is so weak. Son of former chief minister Amarsinh Chowdhry, Tushar is a minister of state at the Centre but have you heard any other Congress leader helping the tribals in Gujarat or taking up their issues with the state government?

What is going good for the Congress?

As I said, they have become proactive. (State congress president) Arjun Modhwadia is quite active. He keeps an aggressive posture also. But organisationally, structurally, they are still weak. Even today they are no match for the BJP.

'Indian middle-class would not like Modi as prime minister' 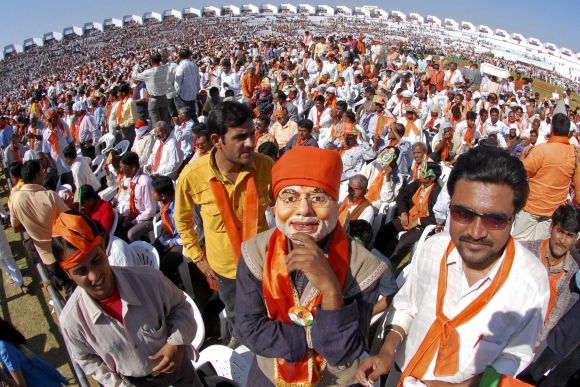 Image: A supporter of the BJP at the swearing in ceremony of Gujarat Chief Minister Narendra Modi
Photographs: Amit Dave/Reuters

How do you see some reports, though not officially acknowledged, that Rahul Gandhi will be shifting his attention and focus from UP to Gujarat? What do you think? How will it play out?

I don't know about that. I think he would focus on Uttar Pradesh only because of the 2014 general elections. I don't think he will engage at the same level with Gujarat. There is no sign of it.

But for the Congress to strengthen their idea and morale, is it not necessary to win Gujarat, once?

Gujarat is important but remember that, at the national level Gujarat sends only 26 MPs. It's not a significant number.

So how do you see the coming election in Gujarat? Who is likely to win?

I think the BJP would get a majority in the Gujarat assembly elections of 2012. Modi is talking about winning 150 seats, which is out of the question. Modi will get fewer seats than in the 2007 election.

If the BJP wins, do you think Modi will leave Gujarat for New Delhi?

But what is the evidence that he is not 'approved'? He has not even been tried and not rejected so far? How do we know he doesn't stand a chance?

Look, you still find that he is persona non grata for many European nations and America. The Western world is still very important for the Indian middle-class. Also, we know how religious the Indian middle-class is. I am talking about religious Hindus who observe rituals. They won't approve this kind of violence ever. It's a very subtle disapproval, you know.

The Sohrabuddin Sheikh encounter case is in court so we should not speak on the merits of it but if you consider Sohrabuddin as a 'terrorist', then some urban people would not mind if he gets killed in a police encounter, real or fake. But, the Indian middle class will NEVER approve of his wife's encounter. That subtle distinction is there in our minds, surely.

And all said and done, the 2002 Gujarat riot images are still there in the minds of the Indian middle-class. They don't approve of this kind of violence and this kind of aggressive Hindu identity.

'Modi talks about development but his negative image lingers' 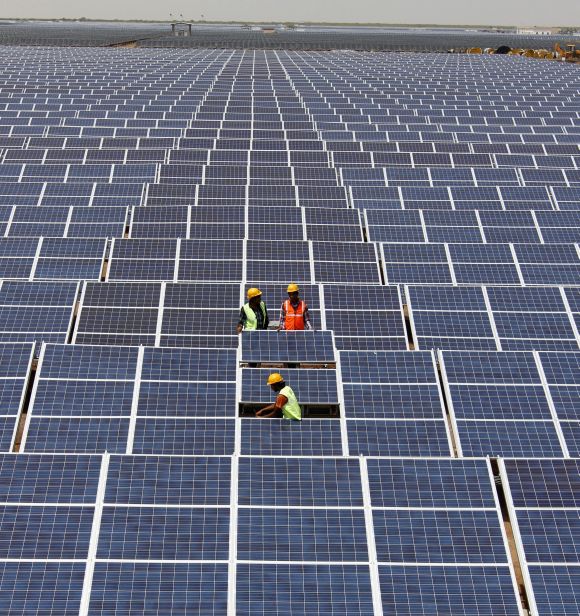 But the middle-class also wants money, wants growth, they want the country to function and don't you think they may perceive in Modi a leader in New Delhi who will make things work, who will give a vision and direction and speed to the governance of the nation?

What vision? What direction? What is the difference in the economic policies of the Congress and the BJP? If he is inviting people for investment, all other states are inviting, too. Whether it is Karnataka, Tamil Nadu, or Andhra, or even Orissa, all of them are as good as Gujarat in attracting capital.

International companies are coming to Orissa too. And investment is coming only when Modi is ready to hand over big chunks of land cheaply. There are a number of states who are also ready to do so. Let me know what is the difference between his policy and his vision and the vision of other parties and the Congress? The economic policy is no different. There is nothing exclusive about Modi's policy or vision. Every other state has it.

The Congress has been on a weak wicket. People's dissent against the United Progressive Alliance is there to see. In the BJP, there seems to be a lack of focus. But, it seems Modi may present himself as a mass-based leader and as a strong leader as well. That combination may put him ahead of the current crop of BJP leaders.

No, the BJP is witnessing a lot of infighting. It may not benefit Modi. The president of the BJP was not on talking terms with him for a long period of time. He publicly admitted that they are not speaking with each other. See how in a very critical election like UP he was not invited. In Bihar, he has become persona non grata. This time the Punjab unit did not invite him.

If he has that kind of national presence these regional leaders should not be reluctant to share the dais with him. They know what kind of negative impact it will have in their area.

Modi has not been talking in a negative language now. He is talking of development, talking of beti bachao, of solar energy.

He may talk about development but his negative image is still lingering. Why is the leadership of Bihar, UP, and Punjab not ready to invite him?

'Powerful section within BJP and NDA are opposed to Modi' 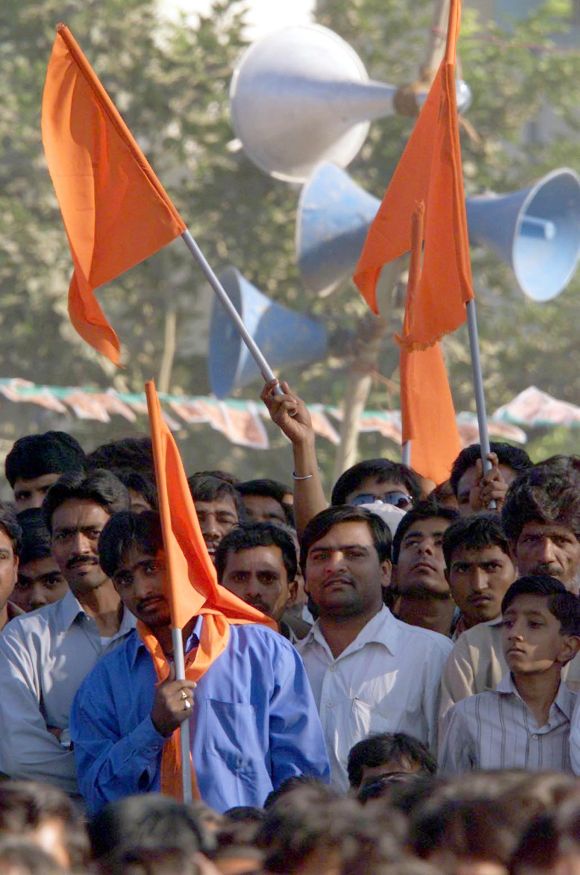 The supporters of Modi would argue that these leaders are buying the image of Modi which is created by the media and other forces. Modi is saying that I am cleared by so many courts, the Special Investigation Team and people of the state. You know that in six-seven important riots cases, Hindus have been punished by the court. The process of justice is much better than what has been happening in the 1984 riots.

If the regional leaders of UP, Punjab and Bihar think that Modi cannot get MORE votes for them or they see Modi as a competitor, then why would they call him? There is a powerful section within the BJP as well as in the National Democratic Alliance who are opposed to him. That will go against Modi.

If Modi is not getting them additional votes why should he be invited? There is no doubt that there are certain reservations about him. And what are those reservations? I think those reservations are reflected in the decision of leadership in the BJP and NDA not to call him for the last few state elections.

If compared with 2002 to 2012, what are the middle-class Gujarati voters thinking about the issue of Hindutva? Who is lining up with Modi?

The Gujarati middle-class wants development. Farmers are a mixed bag. Many of them are unhappy. The Patels are divided for and against Modi.

Once, during Madhavsinh Solanki's era, KHAM (Kashtriya, Harijan, Muslims and Adivasis) was the base of the Congress. When the Patel community is opposing Modi in some pockets, he must have Solanki-type KHAM support. The Gujarati OBCs are divided. If Modi gets substantial support of the Gujarati OBC then he will easily offset the losses caused by depletion of Patel farmer votes.