Readers suggest: How to end stand-off on Lokpal 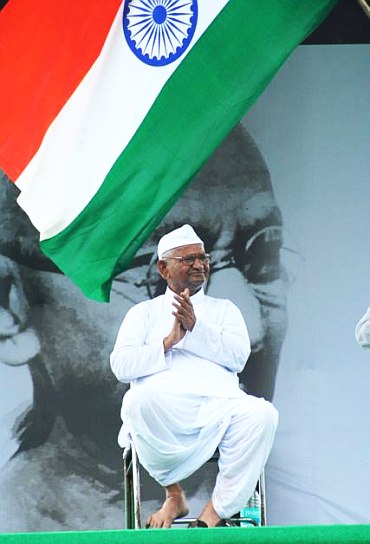 We had asked our readers to suggest ways to resolve the stand-off between the United Progressive Alliance government and Team Anna Hazare on the proposed Lokpal Bill draft.

We received hundreds of responses from readers, some of which are being highlighted here.

Still haven't posted your suggestions yet? Click here to do it now.

* Withdraw the Govt version of the Bill.

* Have an online/offline survey on the controversial points.

* Present the revised bill to Parliament and pass it immediately

'Include PM and bureaucrats in the ambit of the bill' 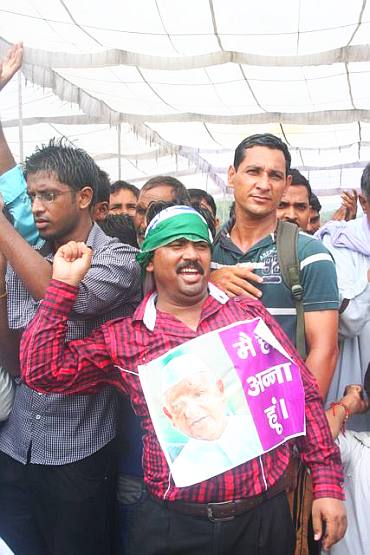 * Let this government drop their ego and arrogance

* Include PM and all top bureaucrats in the ambit of the bill  Keep judiciary out of the purview of the bill; but bring in separate strict law in selection of judges and monitoring their activities

* Let all citizens of India take personal oath not to encourage corruption anymore in their walks of life.

* The PM should interfere in this matter not Kapil Sibal or any other minister.

* Do a referendum. Write advantages and disadvantages of both bills, then let India decide.

* Compromise in some issue by both teams.

* Appoint some honest person in the standing committee. 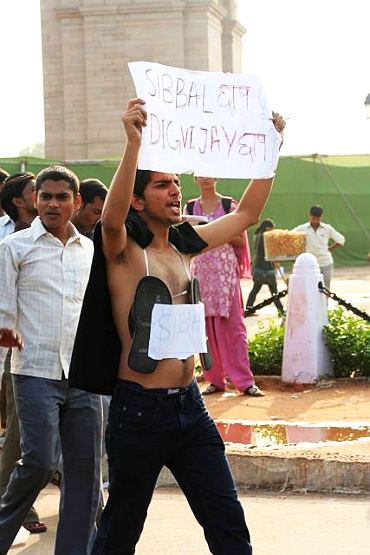 * PM should be included (in Lokpal's purview).

* Include all the government officials (in Lokpal's purview).

* Include all the MPs under Lokpal.

* It is shocking to see a mischievous and sinister bill prepared by the UPA government. Instead of punishing corrupt babus, NGOs have been targeted and complainants have been given punishment. Hence government bill stands totally rejected.

'Discuss both versions of the bill point by point' 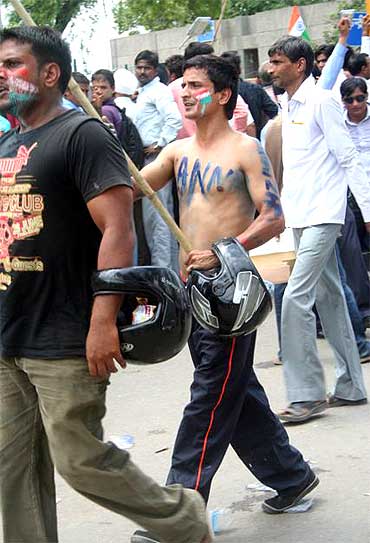 * The Govt's Lokpal bill should be discussed point by point and Anna's team can show why it is too weak to prevent corruption.

* Then Anna's Lokpal bill can be discussed point by point and Govt should show what is wrong with it and why it should be modified or deleted.

* This debate will thereafter continue throughout the country as the people would have heard both sides.

* Suggestions will come in from all quarters; these suggestions can be evaluated and then a revised Lokpal bill can be framed.

* If necessary the second or third meeting between the two teams can be held under full TV live coverage. At the end of it all there is bound to be a consensus because the whole country will be party to the debate. This would be probably the first time in the history of democracy that a debate of this nature is held. 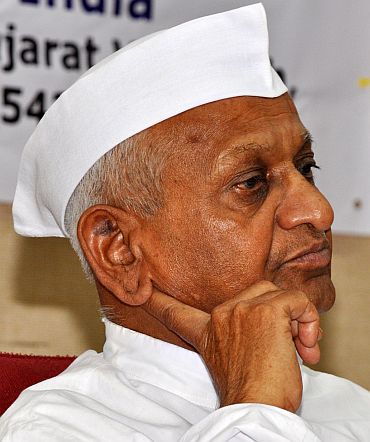 * Make Lokpal too accountable like normal citizens to prevent super institution and submit its recommendations and actions to Parliament.

* Let all those MPs who are in agreement with the Jan Lokpal Bill, write an open letter to the Speakers of both Lok Sabha and Rajya Sabha seeking introduction of the bill in the House. If, say, around 20 or 30 MPs in each House are seeking such an introduction, the Speakers should have no problem in introducing the JLP forthwith without any delay.

* The Parliament and all its so-called peoples representatives owe to the angered, agitated and cheated masses atleast this much if not passing the JLP, which is undoubtedly far far superior to the fake govt bill, without debate

'Give the govt another chance to show their credibility' 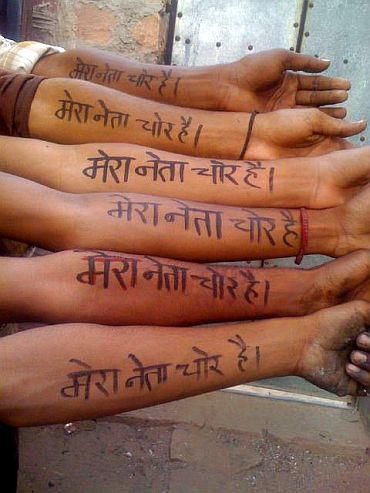 * The govt can give a written and time bound assurance that Anna's concern views will be accommodated in the current govt bill. Except PM & Judiciary issue.

* Team Anna should accept the offer and stop the current protests. Giving govt another deadline like it did during the April protests.

* The team anna should once again give a chance to the govt to show their credibility; giving due respect to the Parliament and have trust on our constituition.

* Team anna can, meanwhile, take mass awareness campaign regarding Jan Lokpal bill. People are thronging the bandwagon without understanding the nitty-gritty of bill. So by winter session if the govt fails to pass the bill with concerns of team anna, then team Anna can make much bigger movement with more informed protesters.

* The govt must understand the public sentiment and refrain their trouble-shooters from making irresponsive and un-democratic smug campaigns against team Anna. They are only making joke of their status and the government.

'Govt can exercise its power whenever it is needed'

* Jan Lokpal Bill of team Anna to be tabled on the standing committee instead of govt version of the bill.

* The prime minister should be kept out of the ambit of Jan Lokpal when he is in power but the allegation can be looked after as soon as he leaves his office.

* CBI-like institutions should come under Jan Lokpal and the Govt can exercise its power whenever it is needed.

* All bureaucrats and govt officials in all the depertments, including police, should come under jan lokpal. The proper reforms in this regard required the establishment of effective reforms in state level as well as block level. 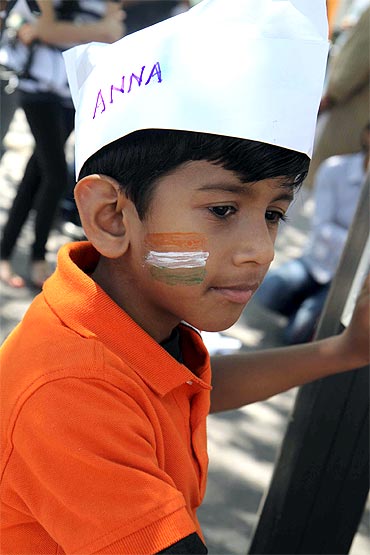 * The current version of Lokpal Bills can be implemented as is without making huge debatable changes.

* The Govt should give an assurance in writing that Jan Lokpal recommendations will be considered to implement after monitoring the performance of the Lokpal in the coming years.

* We should make both Govt and Anna's team to understand that continuous monitoring and improvements through addendum only make any system perfect. There is no meaning in arguing who is right/wrong based on assumptions/anticipation are meaningless unless supported with behavioral data

Civil society should broaden their base 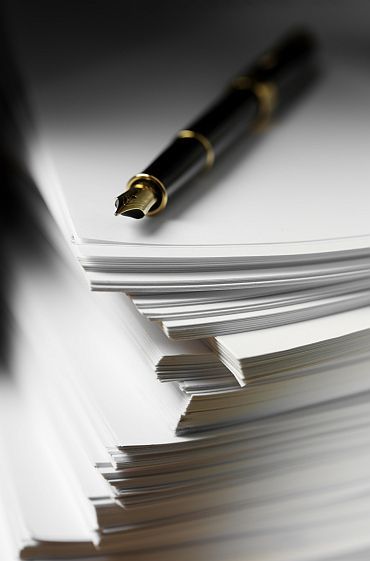 * Introduce Anna`s bill in Parliament preferably through opposition for debate to include acceptable points, if rule permits. It will bring credibility to the govt. Govt should take the interest to pass the modified bill if agreed upon by all involved parties.

* Anna should break fast asap on assurance of passing the bill by govt within reasonable time frame agreed upon by all parties involved. We need him for many other future agitations.

* Civil society should broaden their base by recruiting volunteers from all sections of societies to reach out to all citizens for spreading the need to resist paying bribe to prevent corruption.

* Perhaps one bill may not be enough to cover everything. We always find that the laws framed in our country have many loopholes and that is being used by culprits to go unpunished. 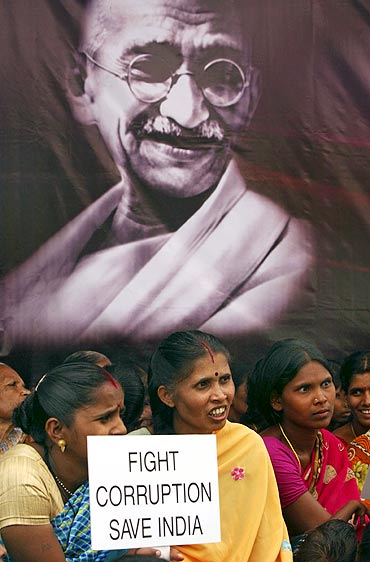 * If PM comes under the purview of Lokbal, which will weaken the democratic system. PM should come under the ambit of Lokpal once he demits the office of PM. Once Lokpal gets the authority to raise corruption charges against PM and remove him, then what is the authority of our elected representatives in Parliament?

* As per the democratic system of the country, Judiciary has its powers and privileges and if Lokpal take the power of judiciary by including them under the purview of Lokpal, it will jeapardise the judicial system. So, they should be kept out of the ambit of Lokpal.

* The area where corruption is more prevalent should give more stress in the Lokpal such as politicians, elected reprsentatives (people have the right to elect their representative but no right to remove them if they make corruption so Lakpal should take this responsibility on behalf of people), Govt employees,etc.

'Government should take back the proposed lokpal bill' 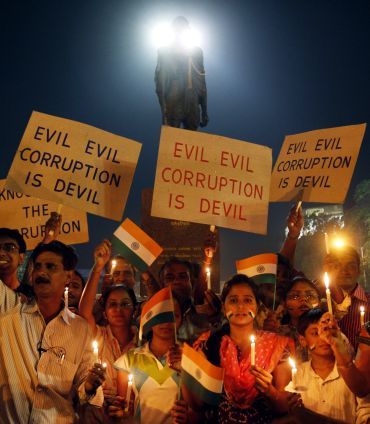 * Government should take back the proposed lokpal bill.

* They should arrange for a joint discussion on the bill, which should include govt panel, opposition, civil society, retired judges and intellectuals of high credibility.

* Come up with a bill that should resolve the purpose of each and every individual irrespective of caste and religion.

* The law should be reviewed after a regular interval of time.

* In case of any dispute, the majority view should taken. We have faith on democracy that does not mean we don't have the right to raise our voice.