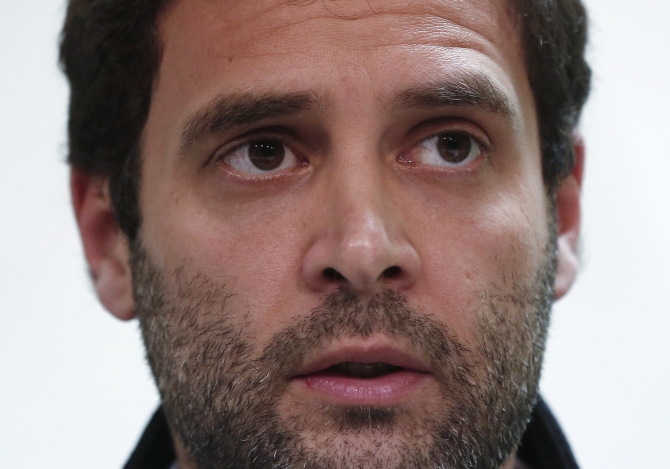 Rahul Gandhi’s interview to Arnab Goswami was telecast on the wrong day. Monday was a black day for the Congress party, and even so for Rahul Gandhi.

A definite political sign emerged from within the Congress that it is gearing up for disaster in Election 2014. It is also increasingly clear that Rahul Gandhi is using his power to secure his own position and his team's future when things are on the downslide.

On Monday, when many of us were looking forward to Rahul’s first television interview, the Congress party headquarters in Ahmedabad, Guwahati, Chandigarh and Bhopal were receiving Rahul Gandhi’s unpleasant dictates.

Rahul is highly insecure about the Congress old guard in New Delhi and in the states.

The distribution of tickets for the Rajya Sabha shows how Rahul wants to use the election to clear the old guard and replace them with his own choices.

There is nothing wrong in doing so, but then Rahul can’t claim the high moral ground as he did in his television interview.

Take a look at the four choices he made, which has created severe heartburn in the Congress's old guard. 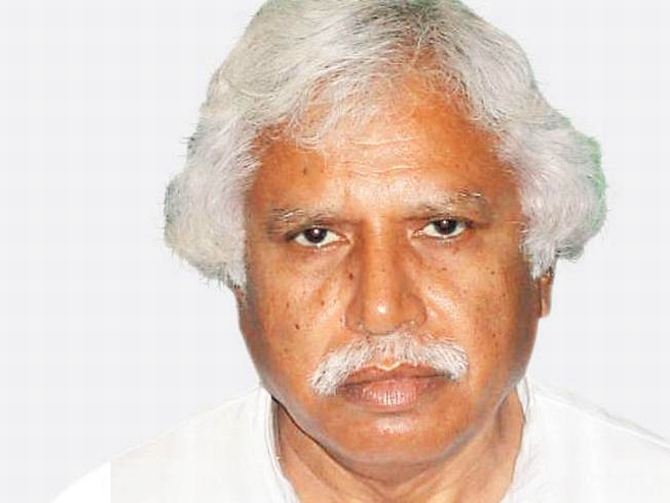 On Monday, the Congress party's Gujarat headquarters resembled a graveyard.

Ahmed Patel, Gujarat’s most powerful Congress leader for more than 20 years, was overshadowed in the last assembly election where Patel played NO role in the distribution of tickets.

By nominating Madhusudan Mistry for the Rajya Sabha, Rahul seems to have handed over the state to Narendra Modi in the Lok Sabha election.

Whatever little hope existed of the Congress putting up a decent fight in the coming election, to highlight anti-incumbency against Modi, has been dashed.

It is not that Mistry is an undeserving candidate, but he should have fought, without fear of losing, from the Congress bastion of Sabarkantha where in the December 2012 assembly election the party won six out of seven assembly seats in spite of the Modi wave.

Merely to teach a lesson to the old guard and the vested interests of the state Congress party, Rahul gave a ticket to his loyalist Mistry.

Mistry is not just one of many leaders. He surveyed the mood of voters for the Congress in 543 Lok Sabha seats. He is a member of Rahul Gandhi’s core team and has on his fingertips information on how many seats the Congress is likely to lose or win.

He was entrusted the task of preparing a panel of three possible Congress candidates for each Lok Sabha seat.

How can Mistry then be allowed to escape the election himself?

Shaktisinh Gohil, who is perceived to be close to Ahmed Patel, lost out in the process.

From the Gujarat Congress point of view, Gohil would have been a better choice because he hails from Saurashtra, is a Kshatriya and is an old party warhorse.

To counter the Patel-dominated Bharatiya Janata Party, Gohil’s caste credentials would have worked better than anyone else’s.

A senior Congressman and the party’s office-bearer in Ahmedabad told Rediff.com, "Rahul was wary that Mistry could lose if the ‘Modi for PM’ slogan catches on in Gujarat, so instead of taking up the challenge, Mistry was given a safe passage out.” 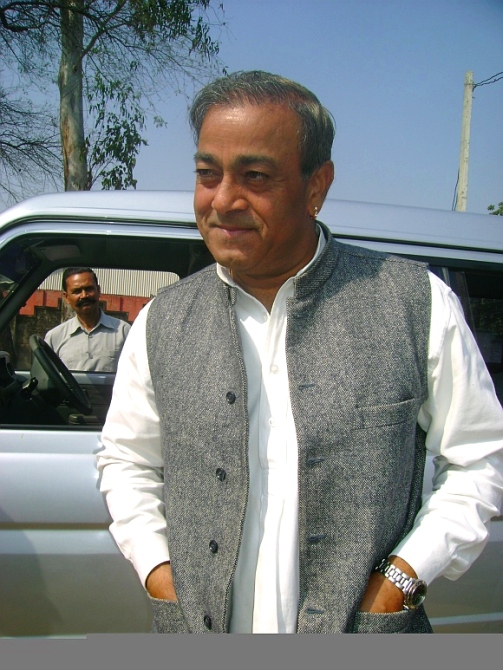 'I have an aim, I have a clear aim in my mind and the aim is that I do not like what I see in Indian politics, it is something that is inside my heart. It is like in our mythology when they talk about Arjun, he only sees one thing, he does not see anything else. You asked me about Mr Modi, you ask me about anything and the thing that I see is that the system in this country needs to change, I don’t see anything else and I am blind to everything else.'

The most pivotal Rahul expression here is, 'The system in the country needs to change.'

Oh my god! He should read Monday’s papers and see the news in Guwahati.

Every region in India has aspirations. They want a representation in the power set-up in New Delhi.

Regional satraps want a share of the pie of the Centre’s power and they don’t want to be dictated to as has been done since the days of Indira Gandhi.

Wasn’t Rahul talking exactly about this in his interview?

But see what happened in real life, away from the cameras.

It is known that Rahul Gandhi faces resentment from the loyal people of Amethi, his Lok Sabha constituency.

Slowly but steadily, the Gandhi family's hold over their electoral bastion is weakening.

The Aam Aadmi Party’s Kumar Vishwas’s diatribes against Rahul Gandhi is percolating down to the villages. So, Rahul’s team has started a defensive war of securing dissent in its favour.

The biggest dissenter against the Gandhis in the area is Sanjay Singh, the member of Parliament from neighbouring Sultanpur.

His wife Amita Singh -- the former badminton player whose first husband was the late national champion Syed Modi -- lost the last assembly election on a Congress ticket. Sanjay Singh was about to join the BJP, sources in the latter party claim. Sanjay Singh, they say, even visited Gandhinagar to meet Narendra Modi.

But he is now Rahul Gandhi’s choice for a Rajya Sabha ticket from Assam, imposed on the three-time Assam Chief Minister, Tarun Gogoi.

This is just not done by a leader who claims to be different, who claims he wants to improve the system in the country and the party.

Just to secure his own Lok Sabha seat of Amethi, Rahul imposed New Delhi’s choice on Assam where people are sensitive about language.

One fails to understand why Sanjay Singh was not accommodated from Himachal Pradesh or Haryana.

Why should poor Assam bear another Singh after the ‘outsider’ Dr Manmohan Singh, who is also a Rajya Sabha MP from Assam?

So much opposition has been created due to Rahul’s choice that the Congress, which was likely to win three Rajya Sabha seats in Assam, now faces the real danger of losing the third seat if the Opposition parties unite and put up a candidate. 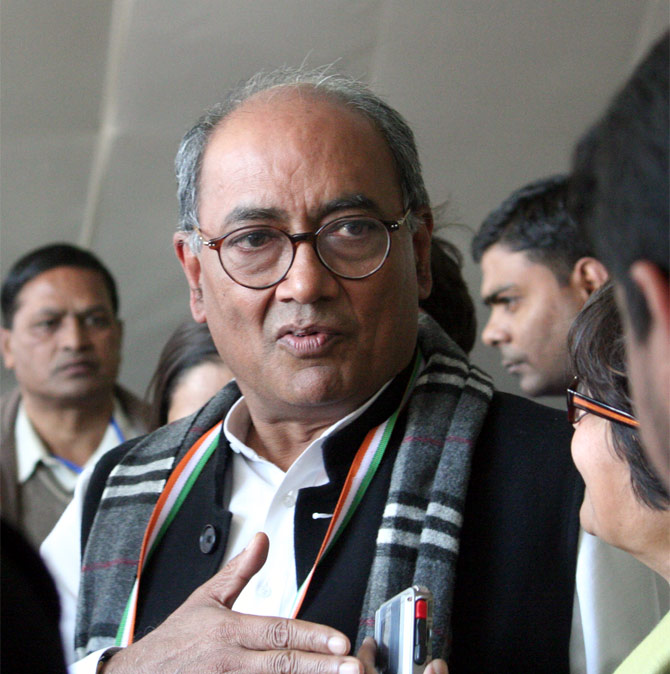 Notwithstanding his assertion in his television interview, that the Congress will win the general election, the fact that Rahul Gandhi does not think his party is likely to win is most evident from his decision to allow Digivijaya Singh to enter the Rajya Sabha.

How can Narendra Modi's most vocal opponent in the Congress run away from the Lok Sabha battle?

What message does it send voters?

He is giving protection to his loyalists before the miseries of the post-election scenario descend upon them.

In the process, he has eroded the regional Congress leader’s powers, he has imposed the much-hated high command’s will on the states and he has exposed his own fear of defeat in the coming Lok Sabha election and threats from the old guard.

Rahul has invited harsh criticism because Digvijaya Singh's election to the Rajya Sabha is a baffling decision, even to his sympathisers.

For the last seven years, rightly or wrongly, the most vocal voice speaking on Rahul Gandhi's behalf has been Digvijaya Singh’s.

It is sensational that Rahul Gandhi, who speaks endlessly about the importance of elections in a parliamentary democracy, is allowing his 'voice' to enter Parliament through the back door when there is a dire need for the party to ensure that people with a mass base go out in the field and take head on the BJP which is surging ahead in the Hindi heartland under its prime ministerial candidate Narendra Modi's leadership.

Make no mistake, the Congress’s main electoral battle is in the Hindi heartland, and it is very important that the Congress’s Hindi-speaking leaders take up the fight.

If Digvijaya Singh, who has been crusader-like in his criticism of Modi, dithers to fight a Lok Sabha election, then what message is the Congress sending across India?

Is there any doubt that the Congress is facing a crisis of sorts?

Is there any doubt that the party’s tested leaders like Digvijaya Singh must fight the Lok Sabha election in what is considered one of the toughest elections the country has ever faced?

Is it really in the Congress’s interest that smart and capable leaders like Digvijaya Singh and Madhusudan Mistry should come timidly to the Rajya Sabha so that Rahul’s team remains relevant when the party faces tough times in the post-election period? 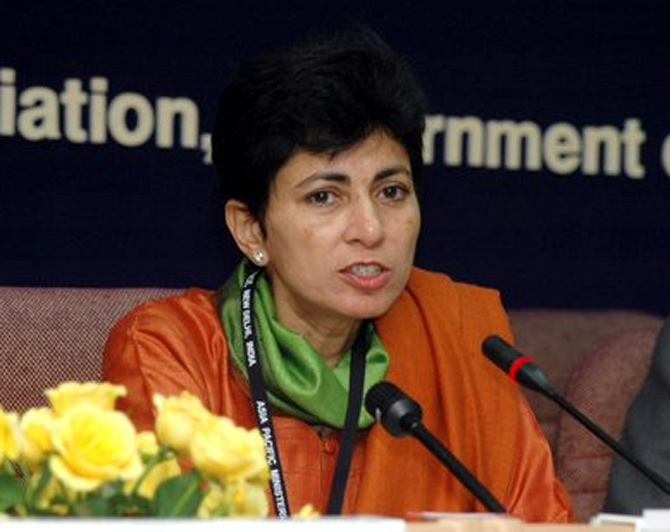 Haryana Chief Minister Bhupinder Singh Hooda is fuming that Kumari Selja was allowed to resign from the Union council of ministers and given a Rajya Sabha ticket.

Hooda is already under pressure from the Aam Aadmi Party. Now, his and Selja’s feud will intensify. Rahul Gandhi extended a helping hand to Selja because she is a loyalist of the Nehru family.

When Rahul Gandhi gave a Rajya Sabha ticket to Sanjay Singh, a member of a royal family, the above words were proved wrong.

How can Rahul cajole Sanjay Singh on one hand and also talk of pushing democracy deeper into the country on the other?

Of the three, one is a tainted leader. All of them are too ordinary to occupy the House of Elders. But the Indian-style democratisation process surely exists, in that the trio belong to the villages.

One is from the minority caste of Kharwas of Saurashtra, one is a Dalit and the other is a Kshatriya, most needed to counter the formidable power of the Patels.

Modi’s choices are qualitatively nothing to talk about, but he has selected people who will bring in a few more votes so crucial to win the decisive election ahead.