Sign in  |  Create a Rediffmail account
Rediff.com  » News » Rahul@CII: This is how my politics is different from Modi 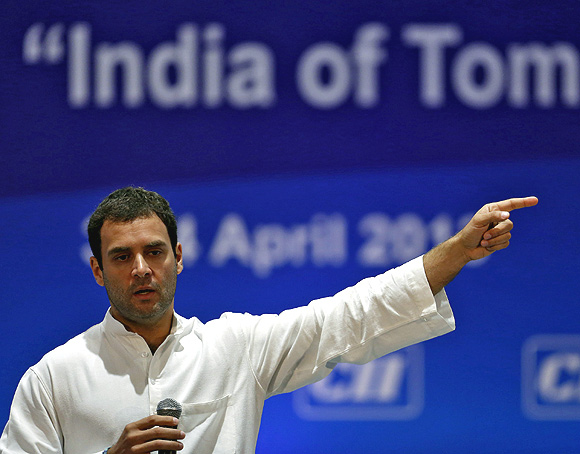 The Congress vice president made a political speech to the mandarins of corporate India. He charmed them with his good intentions but left them unsure with his ability to get things done. Sheela Bhatt analyses the Congress scion's address at the CII.

There was a fantastic mismatch between Congress Vice President Rahul Gandhi and the audience that consisted of industrialists, senior officers of the government, executives of corporate India and many small and medium scale entrepreneurs who were looking for the young leader to spell out an action programme for India's future.

Rahul Gandhi's speech didn't address the issues that corporate India wanted to listen to. The second most powerful Indian didn't match their expectations. If you hear his speech carefully it seems he never wanted to. Rahul spoke mostly on non-economic issues, he wasn't business-like and he stuck to his politics that talked about 'inclusive growth'.

Without naming Gujarat Chief Minister Narendra Modi, he hit him on his political plank when he said, "Harmony and development pre-supposes development of all and exclusion of none. Dalits, minorities, deprived people, destitutes and women are all important links in our societal structure and we have to reach out to them with compassion and empathy." 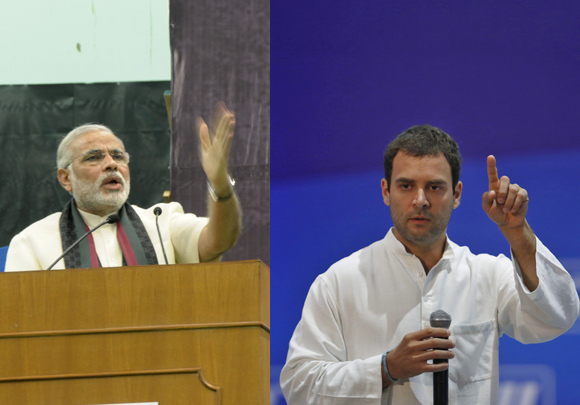 Rahul's speech was important because it was his first public speech after he became vice president of the Congress party in Jaipur. Also after Modi's two public speeches in New Delhi, first at Sri Ram College and another at the India Today conclave, one was eager to hear Rahul and know how he is likely to counter Modi in the coming days.

Rahul did give an idea. If you compare Rahul and Modi's latest speeches, Rahul stands for the human face of development and Modi for a convincing action plan of development, as he sees it.

Even though the Congress is trying its best to see that Rahul is not pitted against Modi the media has already done that and the process looks irreversible, now.

In view of the inevitable Rahul versus Modi contest, Congress and BJP's political lines are being drawn and becoming clearer after Rahul's speech on Thursday. Rahul has given the speech highlighting "a billion people" and giving them voice. He spoke against concentration of too much power in one man. He says it is no solution for Indian issues and problems.

Rahul's public speech was anything but smooth. Rahul's views on China were outright naive and half-baked and it was quite immature to call industrialist Ajay Sriram to the fore-stage to enact an anecdote to explain the difference between India and China's way of governing people. Rahul had no direct answer to India's water problem or the issue of Centre-state relations.

He kept complaining about the prevailing system but he had not a line on how to change it. He did serve his own purpose by emphasising he is not a crown-prince and how he wants to be a people's leader.

When asked about the important question on how to tackle the complex centre-state relationship, he gave an incoherent answer that baffled the audience. "A generational shift has to take place in our complex social and political system to address creatively the grass-roots problem to find solutions to them. If you act on the suggestions of a few, one can go on expecting things to be done, but if you listen to our 1.2 billion people, we can get things done immediately. That is the importance of devolution of power."

He said that the real issue was not between the Centre and the state, but between people whose voices are being heard and of those who have been denied of any role in the political process. This is half-baked answer because there are any number of constitutional, financial, security related and education sector related issues between the Centre and the states that require a strong political response from a powerful person like him. To say that Centre-state relations are more about "devolution of power" is simplistic. 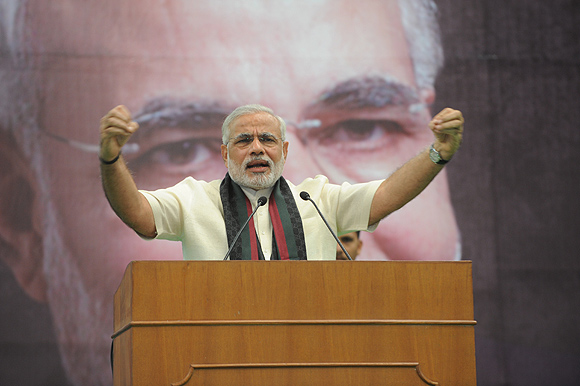 He contradicted himself when he said that the problems that India faces are complex and there were no straight-jacket solutions to that. "It is partly due to our political system which is deep-rooted in democratic ideals and values. Every voice has to be listened and responded to, unlike in countries like China, where sometimes the personal views and perceptions get drowned in the political apparatus. I am getting grooved into that mode gradually," he added.

He indirectly targeted Modi's politics by branding it personality-based, not inclusive and not people-oriented. This event helped, intentionally or otherwise, to position himself at the other end of spectrum where Modi stands. Modi and Rahul are moving in the opposite directions. One wants to move in a fast lane of development and the other wants to ensure that the "voices of people" be heard while marching ahead.

If one came to Sri Ram College in a designer kurta and Gucci stole, the other came in with trimmed hair and an ordinary cotton kurta-pyjama. Modi was unerring and frighteningly strong, Rahul was sometime nervous, sometime confident, sometime stubborn and sometime naive.

Modi was a 100 percent politician at Sri Ram College while Rahul was boringly human at the Confederation of Indian Industry event. Once he even lost his connect to the written speech and too many times he paused with the audience not knowing what's happening to his thought process. But Rahul established that his heart is in right place even though he gave an idea that his knowledge base lacks depth.

'Compared to Modi, Rahul has a long way to go' 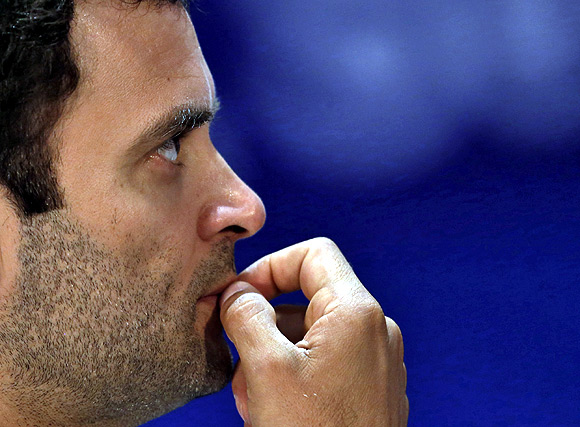 The only brilliant sentence in his speech was when he explained if you empower one person (read Modi) to solve this country's enormous problems, he can't do it but if you empower a billion people then together they can solve the problems. But again he didn't have even one good idea to achieve that dream-like democratic feat.

A large part of his speech was repetition, out-of-focus and not at all appropriate for the particular audience he was addressing. In fact, his supporters said the CII was the medium he simply used to give a political speech to a larger audience.

If viewed from his own politics, Rahul's speech worked because he persistently wants to talk about "inclusive growth" as Indira Gandhi spoke about "Garibi Hatao" but while consolidating his own line of thinking about "giving voice to a billion people" he lost out in presenting himself as a coherent thinker and doer who will be strong and focused if and when he is in the seat of power.

None of the two paragraphs of his talk were inter-connected. His focus on issues was absent and he forgot the question on water while giving an answer.

Rediff.com spoke to many members of the audience about Rahul Gandhi's speech and all of them said nice things about "the man" but they also said they remained unimpressed because they didn't get any idea whatsoever of his capability of getting things done. He was all about "good intentions", they said.

A man who makes furniture in outskirts of New Delhi for top companies said, "There was zero focus in his speech." Another executive of a steel company said, "Compared to Modi, Rahul has a long way to go."

Rahul said, "Presently governance is dependent on a few elected representatives and that too MPs and MLAs. The majority of the peoples' leaders like gram pradhans are denied of any say in the political process that goes into decision making. This is very frustrating."

Reacting to his words, a senior executive of private company said, "Rahul Gandhi always takes a dig at the current system without answering why in the last nine years of rule of his party he hasn't tried to change things."

'Rahul missed a chance to say something new' 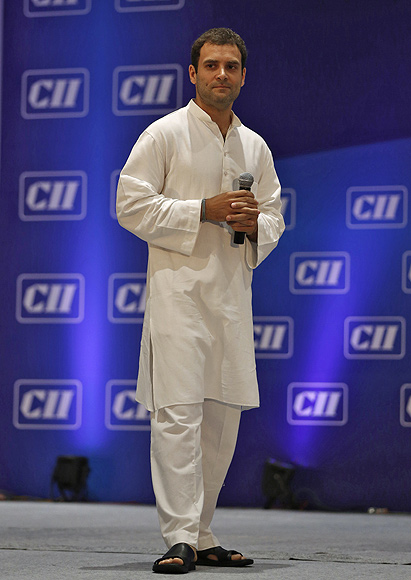 A middle-aged businessman, who had come from Kolkata to attend the event, was disappointed to see that Rahul lost the opportunity to say "something new". He argued that his ideas of "empowering people and inclusive growth is known to me but what next? He should have said something new when all of us were listening so patiently."

A senior government officer, who deals with corporate world on a daily basis, told rediff.com, "Yesterday Prime Minister Manmohan Singh spoke at the CII. He said India can achieve 8 percent growth. His were words of wisdom. Rahul should have picked up a thread from where Dr Singh left off. He is young and honest. He should have told us how the United Progressive Alliance can achieve that. He gave me jitters when he talked about 'poor people as a component' in his politics and about China being not complex etc."

Rahul said he is not "hard-nosed politician" and then smilingly added he is getting there soon.